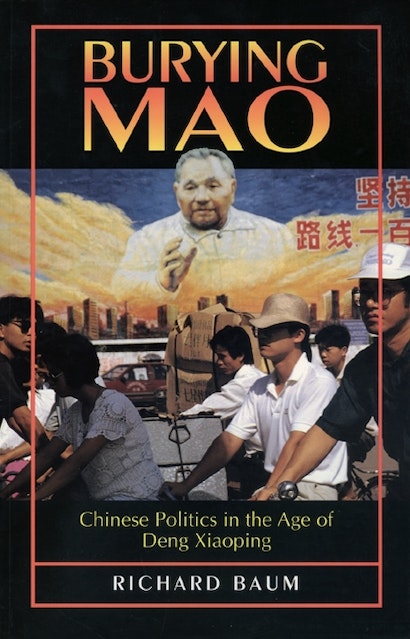 For almost two decades after Mao Zedong’s death, an epic, no-holds-barred contest was waged in China between orthodox Marxists and reformers. With Deng Xiaoping’s strong support, the reformers ultimately won; but they — and China — paid a heavy price. Here, Richard Baum provides a lively, comprehensive guide to the intricate theater of post-Mao Chinese politics. He tells the intriguing story of an escalating intergenerational clash of ideas and values between the aging revolutionaries of the Maoist era and their younger, more pragmatic successors. Baum deftly analyzes the anatomy of the reformers’ ultimate victory in his brilliant reconstruction of the twists and turns of the reform process.

Richard Baum is Professor of Political Science at the University of California, Los Angeles. He has written widely on contemporary Chinese political affairs.

"Baum demonstrates with this book his command of the Chinese political scene in a critical year of transition for China.... Brilliantly researched and full of interpretative and nuanced insights into the leadership struggle, Burying Mao brings China into sharp focus."—Patrick Tyler, The New York Times

"This is the right way to look at Chinese politics, in which power and personalities are much more important than ideology, which is regularly twisted to fit current needs.... Baum excellently pinpoints how factions, the bane of Chinese politics, align and realign."—The Times Literary Supplement

"In this highly readable book, Baum provides a fascinating and extremely detailed account of how Deng Xiaoping came to power, how he reversed Mao's policies and launched China on the path of economic reform, how he handled the complex interaction between the top leaders of the Party, and how he deftly preserved supreme power in his own hands. . . . [Readers] will find much in the book that will help them comprehend developments in contemporary China."—Choice

"What the book brings out is how dangerous was the territory through which Deng and his men had to pass. It was not a simple matter of assuming power and issuing decrees. . . . Deng emerges from this study less as an emperor than as a consummate politician. . . . Burying Mao is a first-class work, coolly judged and clearly written, drawing on a mass of carefully sifted material."—Sunday Times

"Baum demonstrates that Deng Xiaoping is the ultimate Machiavellian leader. . . . the quality of his analysis is first-rate. . . . This should give the reader insight into China as a future world power."—Library Journal

"It is the most comprehensive guide to hand, and is more persuasive for coming in the winter of Dengism."—The Economist