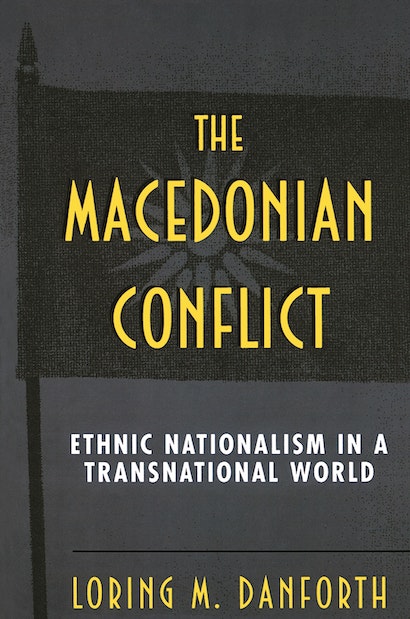 Greeks and Macedonians are presently engaged in an often heated dispute involving competing claims to a single identity. Each group asserts that they, and they alone, have the right to identify themselves as Macedonians. The Greek government denies the existence of a Macedonian nation and insists that all Macedonians are Greeks, while Macedonians vehemently assert their existence as a unique people. Here Loring Danforth examines the Macedonian conflict in light of contemporary theoretical work on ethnic nationalism, the construction of national identities and cultures, the invention of tradition, and the role of the state in the process of building a nation. The conflict is set in the broader context of Balkan history and in the more narrow context of the recent disintegration of Yugoslavia.


Danforth focuses on the transnational dimension of the “global cultural war” taking place between Greeks and Macedonians both in the Balkans and in the diaspora. He analyzes two issues in particular: the struggle for human rights of the Macedonian minority in northern Greece and the campaign for international recognition of the newly independent Republic of Macedonia. The book concludes with a detailed analysis of the construction of identity at an individual level among immigrants from northern Greece who have settled in Australia, where multiculturalism is an official policy. People from the same villages, members of the same families, living in the northern suburbs of Melbourne have adopted different national identities.

Loring M. Danforth is Professor of Anthropology at Bates College. He is the author of The Death Rituals of Rural Greece and Firewalking and Religious Healing: The Anastenaria of Greece and the American Firewalking Movement, both available from Princeton University Press.

"Danforth, an anthropologist, takes one through the ferociously juxtaposed claims and counterclaims, and he explains why the issues set people off with such intensity by fitting the case into modern anthropological thought about national identity, ethnic nationalism, and the role of culture....Danforth struggles mightily to maintain his scholarly detachment amid one of the more explosive topics in the universe, and for the most part he succeeds."—Foreign Affairs

"A significant contribution both theoretically to the study of ethnic and national identity and specifically to those interested in Balkan politics."—Adamantia Pollis, American Political Science Review

"A superb case study both of the conflict between nationalism and ethnic aspirations and of the curious parallelisms in their development. . . . It is a level-headed, humane, and very timely political intervention in a quarrel that continually threatens to become more than a war of words."—Journal of Modern Greek Studies

"[An] engaging, original, timely, and conscientiously written study. . . . This is a well-written work and a major contribution to the study of national consciousness and nation-building."—Philip Shashko, American Historical Review

"Loring Danforth humanizes the Macedonian conflict, shows us real people as they live this conflict, and makes clear that, despite its unique features, this struggle over ethnic and national identity is shared with other groups throughout the world. A good, rapid read filled with the fruit of first-rate, on-the-scene digging into people's lives."—Lou Panov, The Boston Book Review