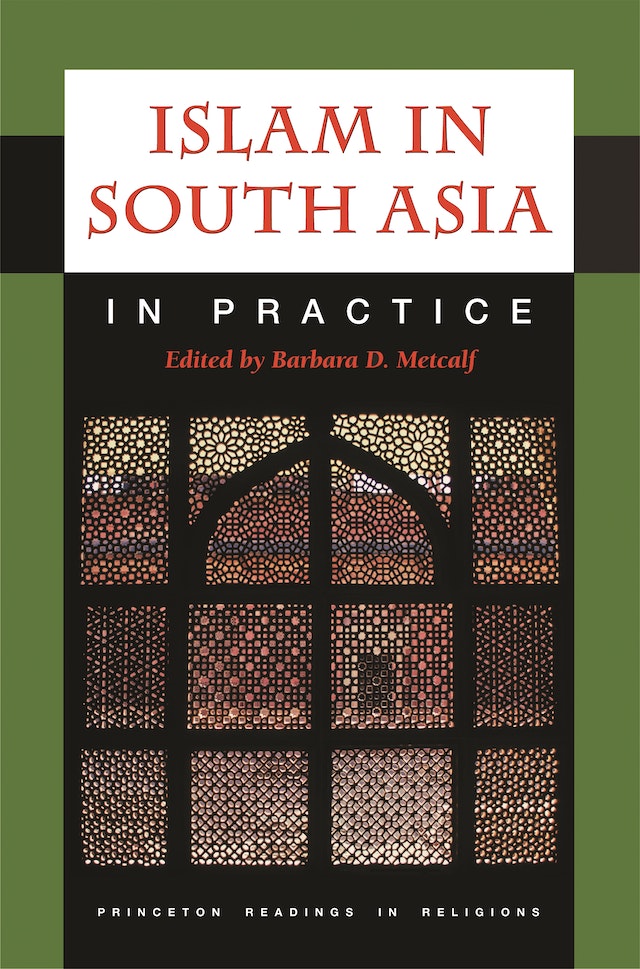 This volume of Princeton Readings in Religions brings together the work of more than thirty scholars of Islam and Muslim societies in South Asia to create a rich anthology of primary texts that contributes to a new appreciation of the lived religious and cultural experiences of the world’s largest population of Muslims. The thirty-four selections — translated from Arabic, Persian, Urdu, Bengali, Tamil, Gujarati, Hindavi, Dakhani, and other languages — highlight a wide variety of genres, many rarely found in standard accounts of Islamic practice, from oral narratives to elite guidance manuals, from devotional songs to secular judicial decisions arbitrating Islamic law, and from political posters to a discussion among college women affiliated with an “Islamist” organization. Drawn from premodern texts, modern pamphlets, government and organizational archives, new media, and contemporary fieldwork, the selections reflect the rich diversity of Islamic belief and practice in South Asia. Each reading is introduced with a brief contextual note from its scholar-translator, and Barbara Metcalf introduces the whole volume with a substantial historical overview.

Barbara D. Metcalf is president-elect of the American Historical Association. She is professor emeritus of history at the University of California, Davis, and most recently has taught at the University of Michigan. She is the author of Islamic Revival in British India and the coauthor of A Concise History of Modern India.

"[Islam in South Asia in Practice] successfully achieves its place as both a challenge to the Orientalist models of scholarship of the past as well as makes accessible the arguments and primary sources to a larger audience. . . . [T]he overall quality and tone of the articles is one that . . . pushes the field in important and meaningful ways, but manages to do so in a manner that can play well in classrooms."—Ilyse Morgenstein Fuerst, Journal of Contemporary Asia

"[T]he concentration of information and insight provided here—from Islamic doctrine to the mechanics of religious practices, sacred texts and spiritual discipline—goes a long way towards capturing the multifaceted meaning of what it has meant to live one's life as a Muslim at different times and in different places in South Asia."—Sarah Ansari, Journal of Islamic Studies

"[G]iving access to a wide-range of texts, Islam in South Asia in Practice as an anthology is a rich source of the study of modern/pre-modern South Asian Islam—its religious practices, institutions, and worldview. Islam in South Asia in Practice can better serve as an introduction as well as guide and reference book, respectively, to a wide-ranging texts and practices and scholarly debates and discussions on South Asian Islam. In sum, given the extensive variety of topics and issues and broad selection of themes and concerns it covers is a must read for all those students and scholars who are interested in the history of Islam in South Asia in general and 'in practice' in particular."—Tauseef Ahamd Parray, Islam and Muslim Societies Journal

"Barbara Metcalf has helped transform the study of modern South Asian Islam by her insistence on close readings of texts; her attention to religious practice, institutions, and worldview; and her refusal to dismiss the concerns of South Asian actors. This edited volume, with its magisterial introduction, exemplifies these qualities while giving us access to a wide range of texts from throughout South Asia. She and her collaborators are owed great thanks."—Juan Cole, author of Engaging the Muslim World

"This is undoubtedly the richest collection of materials on South Asian Islam ever to be published in a single volume. What makes it so rich is its contributors' presentation and interpretation of primary texts, rather than any attempt to broach a synthetic narrative, however complex. This approach allows the book to be used in different ways: as an introduction to the wealth of Muslim texts and practices in South Asia, as a guide to scholarly debates on South Asian Islam, and as a reference. Barbara Metcalf's introduction is a masterpiece of lucid condensation."—Faisal Devji, New School

"This is a book of the first importance. It offers a way of engaging with Muslims and Muslim societies that takes them out of orientalist and political discourses and instead focuses on what Muslims actually say and do. It should form approaches to Islam among generations of students. Barbara Metcalf's masterly introduction gives the whole book a rich context infused with deep historical understanding."—Francis Robinson, University of London