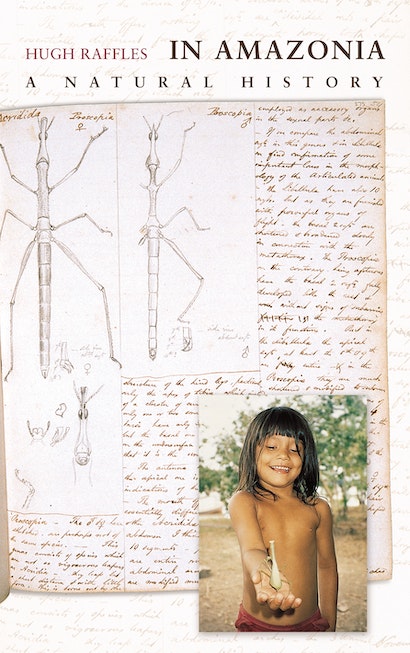 The Amazon is not what it seems. As Hugh Raffles shows us in this captivating and innovative book, the world’s last great wilderness has been transformed again and again by human activity. In Amazonia brings to life an Amazon whose allure and reality lie as much, or more, in what people have made of it as in what nature has wrought. It casts new light on centuries of encounter while describing the dramatic remaking of a sweeping landscape by residents of one small community in the Brazilian Amazon. Combining richly textured ethnographic research and lively historical analysis, Raffles weaves a fascinating story that changes our understanding of this region and challenges us to rethink what we mean by “nature.”


Raffles draws from a wide range of material to demonstrate — in contrast to the tendency to downplay human agency in the Amazon — that the region is an outcome of the intimately intertwined histories of humans and nonhumans. He moves between a detailed narrative that analyzes the production of scientific knowledge about Amazonia over the centuries and an absorbing account of the extraordinary transformations to the fluvial landscape carried out over the past forty years by the inhabitants of Igarapé Guariba, four hours downstream from the nearest city.


Engagingly written, theoretically inventive, and vividly illustrated, the book introduces a diverse range of characters — from sixteenth-century explorers and their native rivals to nineteenth-century naturalists and contemporary ecologists, logging company executives, and river-traders. A natural history of a different kind, In Amazonia shows how humans, animals, rivers, and forests all participate in the making of a region that remains today at the center of debates in environmental politics.

Hugh Raffles is Associate Professor of Anthropology at the University of California, Santa Cruz.

"A new classic of the Amazon. . . . In a sweeping panorama of the history of the Amazon . . . Raffles impresses with his enormous scholarship and lyrical language. . . . [T]he range of Raffles's knowledge is exquisitely broad. What we thought we knew of the Amazon and the reasons for its devastation will forever be changed by this rapturous soliloquy on the region."—Choice

"[It draws] upon a range of literature not typical of Amazonian studies. Specialists and general readers will appreciate the scope."—Stephen Nugent, Journal of Latin American Studies

"A central challenge in studies of the Amazon region is apprehending its social and natural diversity. This book is amongst the most readable and penetrating analyses we have. . . . The tension between being in a place and always on the move, between dissolution and creation, are ambiguities this book manages to capture with deftness and subtlety. It would have been enough to write about this in one locality, but to have done so connecting up various places and people, and across time transforms the argument into a major achievement."—Mark Harris, Journal of the Royal Anthropological Institute

"Without question this is the best book about the Amazon I have read in many years. It is a major contribution to the literature (in every sense) of the region, to the history and sociology of science, and to anthropology in general. Solid, beautifully written, beautifully judged and paced, it has a great deal to offer those knowing everything or nothing about the Amazon."—David Cleary, Amazon Program Manager, The Nature Conservancy, author of Anatomy of the Amazon Gold Rush

"Thoroughly researched and very riveting, In Amazonia is a lovely blend of personal experience and historical commentary about the making of place both in physical and ideological terms. Very rich theoretically, its lively and witty prose is mercifully leached of post-modern, post-colonial jargon, making it both accessible and clear. Not only will this book leap to the forefront of Amazonian analyses but it will certainly take its pride of place in studies of tropical development, ideologies of nature, and the history of ideas about the environment and tropical representation."—Susanna Hecht, University of California, Los Angeles