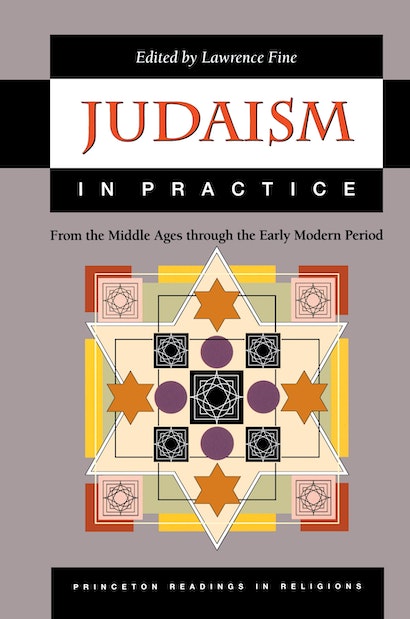 This collection of original materials provides a sweeping view of medieval and early modern Jewish ritual and religious practice. Including such diverse texts as ritual manuals, legal codes, mystical books, autobiographical writings, folk literature, and liturgical poetry, it testifies to the enormous variety of practices that characterized Judaism in the twelve hundred years between 600 and 1800 C.E. Its focus on religious practice and experience — how Judaism was actually lived by people from day to day — makes this anthology unique among the few sourcebooks available.


The volume encompasses the broad scope and complex texture of Jewish religious practice, taking into account many aspects of Jewish culture that have hitherto been relatively neglected: the religious life of ordinary people, the role and status of women, art and aesthetics, and marginalized as well as remote Jewish communities. It introduces such remarkable personalities as Moses Maimonides, Leon Modena, and Gluckel of Hameln, and presents extraordinary texts on festival practice, Torah study, mystical communities, meditation, exorcism, the practice of charity, and folk rites marking birth and death.


Representing state-of-the-art scholarship by distinguished academics from around the world, the volume includes many materials never before translated into English. Each text is preceded by an accessible introduction, making this book suitable for college and university students as well as a general audience. Whether read as a deliberate course of study or dipped into selectively for a glimpse into fascinating Jewish lives and places, Judaism in Practice holds rich rewards for any reader.

Lawrence Fine is the Irene Kaplan Leiwant Professor of Jewish Studies and a member of the Religion Department at Mount Holyoke College. He is the editor of Essential Papers on Kabbalah, the translator of Safed Spirituality: Rules of Mystical Piety, The Beginning of Wisdom, and author of Physician of the Soul, Healer of the Cosmos--Isaac Luria and his Kabbalistic Fellowship.

"Lawrence Fine . . . has assembled an impressive array of writings that explore the variegated ways in which Jews have practiced their religion. . . . By giving us a variety of texts and materials that go beyond the boundaries of conventional sources, Fine has opened up ways of thinking about the Jewish experience that are likely to challenge readers' expectations. In doing so, he and his contributors raise essential questions about the nature of Judaism as a religion and a culture, shake readers out of complacency and leave us to wonder at the marvelous scope of the Jewish people's history."—Barry W. Holtz, The Forward

"This is a rich collection. Fine has secured contributions, introductions, and a selection of materials from accomplished scholars in each area covered. There is no other volume like it. The book is well suited for an undergraduate readership in Jewish studies, and Fine's introduction is appropriate for readers encountering the study of Judaism for the first time."—Robert S. Schine, Middlebury College, author of Jewish Thought Adrift: Max Wiener