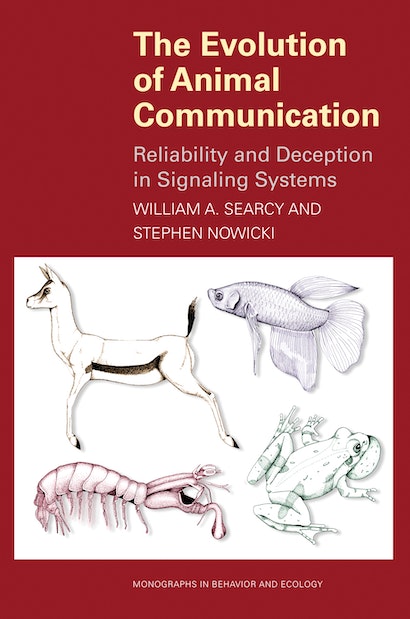 Gull chicks beg for food from their parents. Peacocks spread their tails to attract potential mates. Meerkats alert family members of the approach of predators. But are these — and other animals — sometimes dishonest? That’s what William Searcy and Stephen Nowicki ask in The Evolution of Animal Communication. They take on the fascinating yet perplexing question of the dependability of animal signaling systems.


The book probes such phenomena as the begging of nesting birds, alarm calls in squirrels and primates, carotenoid coloration in fish and birds, the calls of frogs and toads, and weapon displays in crustaceans. Do these signals convey accurate information about the signaler, its future behavior, or its environment? Or do they mislead receivers in a way that benefits the signaler? For example, is the begging chick really hungry as its cries indicate or is it lobbying to get more food than its brothers and sisters?


Searcy and Nowicki take on these and other questions by developing clear definitions of key issues, by reviewing the most relevant empirical data and game theory models available, and by asking how well theory matches data. They find that animal communication is largely reliable — but that this basic reliability also allows the clever deceiver to flourish. Well researched and clearly written, their book provides new insight into animal communication, behavior, and evolution.

William A. Searcy is the Robert E. Maytag Professor of Ornithology at the University of Miami. He is the author, with Ken Yasukawa, of Polygyny and Sexual Selection in Red-Winged Blackbirds (Princeton). Stephen Nowicki is Bass Fellow and Professor of Biology, Psychological and Brain Sciences, and Neurobiology at Duke University, where he currently serves as Dean of the Natural Sciences. He has published more than 65 scientific papers on animal communication and behavior, including work on birds, insects, spiders, and mammals.

"William Searcy and Stephen Nowicki provide a fascinating perspective on the honesty of signals in animal communication systems. . . . [A] comprehensive yet concise review of what we currently know concerning signal reliability in animals, enriched with many in-depth examples."—Katherine E. LeVan and Noah Wilson-Rich, Science

"The book is well written and informative. . . . Searcy and Nowicki are well-known experts in the field of animal communication and sexual selection, and they provide a thorough and careful overview of this important, but often under-discussed, topic."—R. Andrew Hayes, Austral Ecology

"The book is a fascinating evaluation of the present state of reliability and deception in animal signaling systems. It would make a perfect, albeit somewhat controversial, focus for an honors biology or graduate seminar course on animal communication."—H.Jane Brockmann, BioScience

"The Evolution of Animal Communication is a wonderful book. It takes an extremely important hot topic and begins where one should, with a careful analysis of its theoretical underpinnings. More than a review of the work done by others, it is a significant new contribution on its own. . . . one of the best examples of well-written technical science writing that I have encountered in a long time."—Robert Seyfarth, University of Pennsylvania, author of How Monkeys See the World: Inside the Mind of Another Species

"This book is required reading for anyone with an interest in animalcommunication. The level of detail is just right, the examples are very helpful and the text is well written and well organized. Those interested in sexual selection will gain a more realistic, and perhaps naturalistic, understanding of the communication that underpins much of their field."—Peter McGregor, Cornwall College