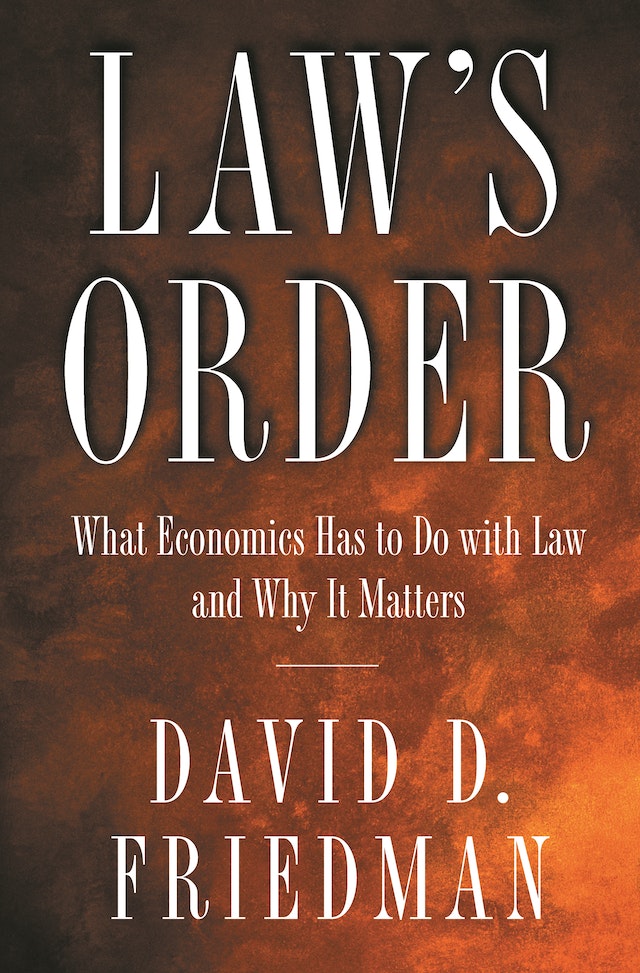 What does economics have to do with law? Suppose legislators propose that armed robbers receive life imprisonment. Editorial pages applaud them for getting tough on crime. Constitutional lawyers raise the issue of cruel and unusual punishment. Legal philosophers ponder questions of justness. An economist, on the other hand, observes that making the punishment for armed robbery the same as that for murder encourages muggers to kill their victims. This is the cut-to-the-chase quality that makes economics not only applicable to the interpretation of law, but beneficial to its crafting.


Drawing on numerous commonsense examples, in addition to his extensive knowledge of Chicago-school economics, David D. Friedman offers a spirited defense of the economic view of law. He clarifies the relationship between law and economics in clear prose that is friendly to students, lawyers, and lay readers without sacrificing the intellectual heft of the ideas presented. Friedman is the ideal spokesman for an approach to law that is controversial not because it overturns the conclusions of traditional legal scholars — it can be used to advocate a surprising variety of political positions, including both sides of such contentious issues as capital punishment — but rather because it alters the very nature of their arguments. For example, rather than viewing landlord-tenant law as a matter of favoring landlords over tenants or tenants over landlords, an economic analysis makes clear that a bad law injures both groups in the long run. And unlike traditional legal doctrines, economics offers a unified approach, one that applies the same fundamental ideas to understand and evaluate legal rules in contract, property, crime, tort, and every other category of law, whether in modern day America or other times and places — and systems of non-legal rules, such as social norms, as well.


This book will undoubtedly raise the discourse on the increasingly important topic of the economics of law, giving both supporters and critics of the economic perspective a place to organize their ideas.

David D. Friedman is Professor of Law at the University of Santa Clara School of Law. He holds a Ph. D. in physics from the University of Chicago and is the author of, among other books, Hidden Order: The Economics of Everyday Life and The Machinery of Freedom.

"An interesting and lively introduction to the economic analysis of law. . . It lays out the principles and values of economic analysis of law, and then proceeds to illustrate and defend that approach in a lively and competent manner. It may not convince every reader that economics provide the key to understanding law, but it makes the case competently and energetically."—Joseph L. Smith, The Law and Politics Book Review

"A thoroughly entertaining, creative, and provocative addition to the law and economics literature."—Choice

"David Friedman is lively, cheerful, and a bit of a tease. . . . Friedman's book is, in the best sense of the word, extremely dense. . . . At the same time, he is cautious and does not try to prove too much. The evidence he provides is impressive and impressively presented."—John Griffith, Times Literary Supplement

"[Friedman] explains what economics has to do with law and why it matters. . . . Applying economics to law matters because it yields efficient outcomes. In a world of finite resources and a world in which the political process controls the distribution scheme, increasing the size of the societal pie will increase the size of the slice we all can expect."—Dennis J. Callahan, The Federal Lawyer

"David Friedman, a first-rate economist with a good deal of experience in applying economics to the law, has written a lucid, imaginative, entertaining, opinionated, and, on balance, a very fine introduction to the application of economics to law. The book is wide-ranging in scope, at once simple and highly sophisticated, consistently provocative, an excellent read, and a notable contribution to an exciting field of interdisciplinary studies."—Richard A. Posner, Chief Judge, United States Court of Appeals For the Seventh Circuit

"David Friedman explains in clear and accessible language what basic economic theory adds to the understanding of law, and how simple concepts of rationality, value, and transaction costs can go a long way to bring out the hidden unity among various diverse branches of law. Whether one speaks of the complexities of marginal deterrence, the resolution of disputes between farmers and railroads, or the social functions of copyright and patent law, Friedman's book provides the outsider to the field with a comprehensive but accessible account of his legal subject matter."—Richard A. Epstein, University of Chicago