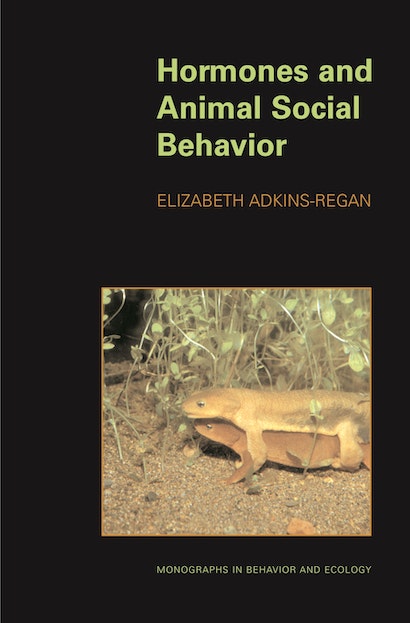 Research into the lives of animals in their natural environments has revealed a rich tapestry of complex social relationships and previously unsuspected social and mating systems. The evolution of this behavior is increasingly well understood. At the same time, laboratory scientists have made significant discoveries about how steroid and peptide hormones act on the nervous system to shape behavior. An exciting and rapidly progressing hybrid zone has developed in which these two fields are integrated, providing a fuller understanding of social behavior and the adaptive functions of hormones.


This book is a guide to these fascinating connections between animal social behavior and steroid and peptide hormones — a synthesis designed to make it easier for graduate students and researchers to appreciate the excitement, engage in such integrative thinking, and understand the primary literature. Throughout, Elizabeth Adkins-Regan emphasizes concepts and principles, hypothesis testing, and critical thinking. She raises unanswered questions, providing an unparalleled source of ideas for future research. The chapter sequence is by levels of biological organization, beginning with the behavior and hormones of individuals, proceeding to social relationships and systems, and from there to development, behavioral evolution over relatively short time scales, life histories and their evolution, and finally evolution over longer time scales. The book features studies of a wide variety of wild and domestic vertebrates along with some of the most important invertebrate discoveries.

"Elizabeth Adkins-Regan takes the reader sledding from brain behavior and from hormones to gene expression, up and down through levels of analysis that often change within a single sentence."—Ellen D. Ketterson, Science

"Adkins-Regan's book is a timely and very welcome contribution that will be hoped to set the standards for the study of the neuroendocrinological basis of behavior in the wild."—Aldo Poiani, Austral Ecology

"This book will, I predict, be immediately recognized as the first modern synthesis of behavioral endocrinology and behavioral ecology. Particularly attractive is its unusual organization. While beginning and ending with hormones, as have other leading texts, it differentiates itself by weaving through ascending levels of biological organization, showing readers how discovery at each level informs us about higher levels. In this way readers begin with DNA and by the end, in an almost seamless manner, find themselves contemplating the evolution of populations. Rather than a recitation of facts, the author poses and answers (when possible) a logical series of questions. Moreover, the writing is excellent."—David Crews, University of Texas, Austin

"Adkins-Regan provides an excellent, well-written source of information that will be valuable not only to behavioral ecologists and endocrinologists but to a much wider audience within biology—where it will be valuable reading to anyone who thinks about why animals do what they do. She has incorporated and synthesized information at multiple levels, successfully bridging the gap from mechanisms to ultimate outcomes. I would be surprised if anyone who reads this book does not come away with both a new appreciation for the complexity of the relationships between hormones and behaviors, and some valuable new directions for their own research."—Stephan J. Schoech, University of Memphis