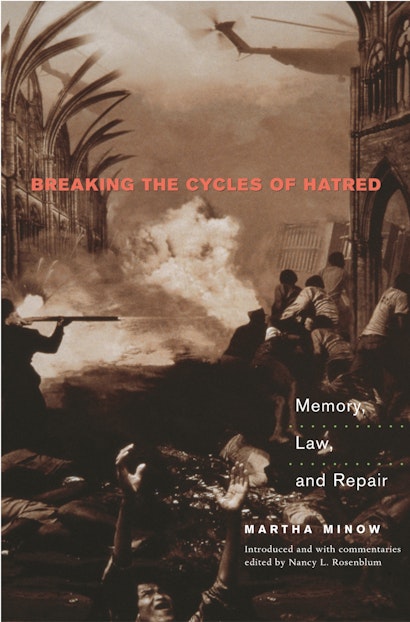 Violence so often begets violence. Victims respond with revenge only to inspire seemingly endless cycles of retaliation. Conflicts between nations, between ethnic groups, between strangers, and between family members differ in so many ways and yet often share this dynamic. In this powerful and timely book Martha Minow and others ask: What explains these cycles and what can break them? What lessons can we draw from one form of violence that might be relevant to other forms? Can legal responses to violence provide accountability but avoid escalating vengeance? If so, what kinds of legal institutions and practices can make a difference? What kinds risk failure?

Breaking the Cycles of Hatred represents a unique blend of political and legal theory, one that focuses on the double-edged role of memory in fueling cycles of hatred and maintaining justice and personal integrity. Its centerpiece comprises three penetrating essays by Minow. She argues that innovative legal institutions and practices, such as truth commissions and civil damage actions against groups that sponsor hate, often work better than more conventional criminal proceedings and sanctions. Minow also calls for more sustained attention to the underlying dynamics of violence, the connections between intergroup and intrafamily violence, and the wide range of possible responses to violence beyond criminalization.


A vibrant set of freestanding responses from experts in political theory, psychology, history, and law examines past and potential avenues for breaking cycles of violence and for deepening our capacity to avoid becoming what we hate. The topics include hate crimes and hate-crimes legislation, child sexual abuse and the statute of limitations, and the American kidnapping and internment of Japanese Latin Americans during World War II. Commissioned by Nancy Rosenblum, the essays are by Ross E. Cheit, Marc Galanter, Fredrick C. Harris, Judith Lewis Herman, Carey Jaros, Frederick M. Lawrence, Austin Sarat, Ayelet Shachar, Eric K. Yamamoto, and Iris Marion Young.

Martha Minow is Professor of Law at Harvard University. Her books include Partners, Not Rivals, Between Vengeance and Forgiveness, Not Only for Myself, and Making All the Difference. She recently served on the Independent International Commission on Kosovo. Nancy L. Rosenblum is Professor of Government at Harvard University. She is the author of Membership and Morals, editor of Obligations of Citizenship and Demands of Faith, and coeditor of Civil Society and Government (all Princeton).

"For policy-makers responsible for reconstructing Iraq or seeking to follow a road map to peace in the Middle East as well as for lay people who care about international relations, this book offers needed reflection on the conditions necessary for resolution of intense and long-standing conflicts. . . . Through a unique blend of legal and political theory and a fascinating variety of insights and connections, the authors of Breaking the Cycles of Hatred have produced a highly commendable set of essays that provide a thoughtful perspective for the events of our day. They merit reading and re-reading."—Annette Johnson, The New York Law Journal

"Minow's essays embody great strength, clarity, and coherence. She manages to move far beyond her own earlier pathbreaking work. What makes this volume unique is the fascinatingly wide variety of connections and insights triggered by Minow's first-rate contribution. The book surely will be of great interest to general readers as well as to specialists in diverse fields such as law, political science, feminist studies, international affairs, and cultural studies. The multidisciplinary inquiry about cutting-edge human rights issues adds depth to the marvelously lucid analysis provided in Minow's essays. From a broad range of perspectives, the various authors actually enact some of Minow's powerful points in the very process of their exploration of previously undeveloped linkages."—Aviam Soifer, Boston College Law School

"This book is an excellent contribution to a newly emerging and potentially very valuable way of thinking about hatred and violence."—Susan Okin, Department of Political Science, Stanford University