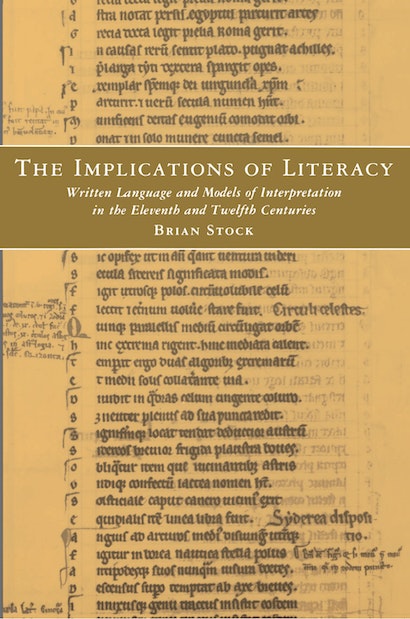 This book explores the influence of literacy on eleventh and twelfth-century life and though on social organization, on the criticism of ritual and symbol, on the rise of empirical attitudes, on the relationship between language and reality, and on the broad interaction between ideas and society.

Medieval and early modern literacy, Brian Stock argues, did not simply supersede oral discourse but created a new type of interdependence between the oral and the written. If, on the surface, medieval culture was largely oral, texts nonetheless emerged as a reference system both for everyday activities and for giving shape to larger vehicles of interpretation. Even when texts were not actually present, people often acted and behaved as if they were.

The book uses methods derived from anthropology, from literary theory, and from historical research, and is divided into five chapters. The first treats the growth and shape of medieval literacy itself. Theo other four look afresh at some of the period’s major issues — heresy, reform, the Eucharistic controversy, the thought of Anselm, Abelard, and St. Bernard, together with the interpretation of contemporary experience — in the light of literacy’s development. The study concludes that written language was the chief integrating instrument for diverse cultural achievements.

"This is a major seminal work. It clearly shows in how deep a sense the Middle Ages was by far the most literate period that Western culture had ever know."—Walter J. Ong, Manuscipta

"This is a highly original, superbly researched, and clearly written work. Its main purpose is to reassess the transformations of European thought in the eleventh and twelfth centuries on the basis of suggesting new relationship between 'oral' and 'written' cultures. Stock's book is probably the most provocative approach to understanding the eleventh and twelfth centuries since the early work of R. W. Southern."—Edward Peters, University of Pennsylvania