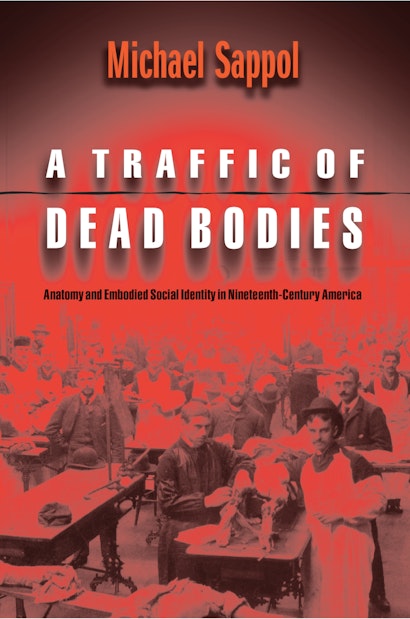 A Traffic of Dead Bodies enters the sphere of bodysnatching medical students, dissection-room pranks, and anatomical fantasy. It shows how nineteenth-century American physicians used anatomy to develop a vital professional identity, while claiming authority over the living and the dead. It also introduces the middle-class women and men, working people, unorthodox healers, cultural radicals, entrepreneurs, and health reformers who resisted and exploited anatomy to articulate their own social identities and visions.


The nineteenth century saw the rise of the American medical profession: a proliferation of practitioners, journals, organizations, sects, and schools. Anatomy lay at the heart of the medical curriculum, allowing American medicine to invest itself with the authority of European science. Anatomists crossed the boundary between life and death, cut into the body, reduced it to its parts, framed it with moral commentary, and represented it theatrically, visually, and textually. Only initiates of the dissecting room could claim the privileged healing status that came with direct knowledge of the body. But anatomy depended on confiscation of the dead — mainly the plundered bodies of African Americans, immigrants, Native Americans, and the poor. As black markets in cadavers flourished, so did a cultural obsession with anatomy, an obsession that gave rise to clashes over the legal, social, and moral status of the dead. Ministers praised or denounced anatomy from the pulpit; rioters sacked medical schools; and legislatures passed or repealed laws permitting medical schools to take the bodies of the destitute. Dissection narratives and representations of the anatomical body circulated in new places: schools, dime museums, popular lectures, minstrel shows, and sensationalist novels.


Michael Sappol resurrects this world of graverobbers and anatomical healers, discerning new ligatures among race and gender relations, funerary practices, the formation of the middle-class, and medical professionalization. In the process, he offers an engrossing and surprisingly rich cultural history of nineteenth-century America.

Michael Sappol holds a Ph.D. in American history from Columbia University, where he was a finalist for the Bancroft Dissertation Award and a winner of the Whiting Foundation Dissertation Fellowship and the National Science Foundation Doctoral Dissertation Research Award. He is Curator at the National Library of Medicine, National Institutes of Health.

"A groundbreaking new book. . . . One of Sappol's great accomplishments in this dazzling book is his creation of a new lens to view . . . well-known—and some lesser-known—episodes [in medical history]. . . . With considerable verve and penetration, he explores orthodox anatomy in American medical education. . . . Sappol reminds us that we continue to pursue the construction and negotiation of the boundaries of our bodies and our selves. . . . We can understand this process better in the light of Sappol's extraordinary evocation of 19th-century anatomy and American culture."—Susan E. Lederer, New England Journal of Medicine

"A powerful and thought-provoking interpretation that enriches our understanding of 19th-century society not simply in America but across the West."—Anne Hardy, Times Higher Education Supplement

"[The] achievement of this book [is its] laying out the importance, scope, structure, and sloughs of the anatomical metropolis in which American medicine developed."—Phillip J. Pauly, Journal of the American Medical Association

"A Traffic of Dead Bodies offers surprising new insights for both medical and cultural historians. It combines an innovative account of anatomy in American medicine with an unprecedented exploration of the dissected body in American culture, from common schools to pulp fiction and Bowery wax museums."—Martin S. Pernick, Journal of the History of Medicine

"A Traffic of Dead Bodies is a major achievement. It is an empirically rich and creatively theorized book that resists easy classification."—Thomas R. Cole, Journal of American History

"In his well-crafted and superbly researched book, Sappol takes us on a fascinating and morbid journey through the powerful and expansive world of anatomical medicine, foregrounding its centrality to the making of modernity. . . . It is an impressive and engaging work of cultural history that greatly enhances our understanding of society and medicine in America's long nineteenth century."—Alexandra Minna Stern, The Pennsylvania Magazine of History and Biography

"This is a wonderful book—original, ambitious, fascinating, detailed—offering an important new approach to the history of scientific medicine as based on anatomical knowledge and a richly textured argument about the centrality of the anatomical body to the bourgeois American sense-of-oneself."—Elizabeth Fee, author of Disease and Discovery and Making Medical History

"This marvelous book exhibits the kind of intelligence and conceptual innovation that should attract a wide range of readers. Creative, cleverly written, and finely argued. Sappol's very smart cultural history of anatomy as both activity and ideology sketches an illuminating picture of nineteenth-century American aspiration and self-understanding."—Regina Morantz-Sanchez, University of Michigan

"This is a well-crafted, extensively researched, fascinating study of the cultural politics of anatomy in nineteenth-century America. It explores an impressive range of cultural expressions, pulling together a disparate array of phenomena that no one has linked before. This book will be of great value to cultural and social historians as well as to historians of medicine."—Karen Halttunen, University of California, Davis