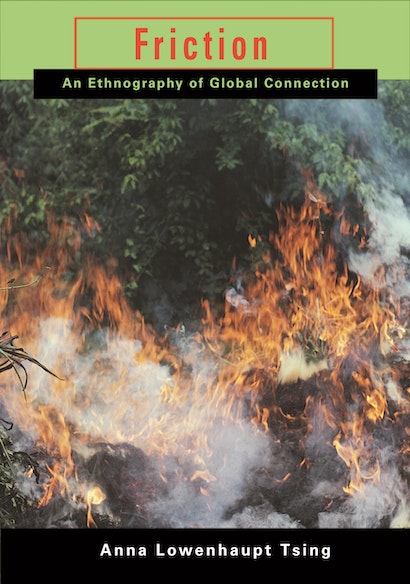 A wheel turns because of its encounter with the surface of the road; spinning in the air it goes nowhere. Rubbing two sticks together produces heat and light; one stick alone is just a stick. In both cases, it is friction that produces movement, action, effect. Challenging the widespread view that globalization invariably signifies a “clash” of cultures, anthropologist Anna Tsing here develops friction in its place as a metaphor for the diverse and conflicting social interactions that make up our contemporary world.


She focuses on one particular “zone of awkward engagement” — the rainforests of Indonesia — where in the 1980s and the 1990s capitalist interests increasingly reshaped the landscape not so much through corporate design as through awkward chains of legal and illegal entrepreneurs that wrested the land from previous claimants, creating resources for distant markets. In response, environmental movements arose to defend the rainforests and the communities of people who live in them. Not confined to a village, a province, or a nation, the social drama of the Indonesian rainforest includes local and national environmentalists, international science, North American investors, advocates for Brazilian rubber tappers, UN funding agencies, mountaineers, village elders, and urban students, among others — all combining in unpredictable, messy misunderstandings, but misunderstandings that sometimes work out.


Providing a portfolio of methods to study global interconnections, Tsing shows how curious and creative cultural differences are in the grip of worldly encounter, and how much is overlooked in contemporary theories of the global.

Anna Lowenhaupt Tsing is Professor of Anthropology at the University of California, Santa Cruz. She is the author of In the Realm of the Diamond Queen (Princeton).

"Friction is an original, nuanced, and elegant work of ethnography and a significant contribution to the areas of globalization; environment and natural resource wars; the politics of indigenous peoples, NGOs, and development; and the sociology of expert versus local knowledge."—Michael Goldman, American Journal of Sociology

"By providing generous anecdotes and personal reflections amid more complex, insightful political commentary and social theory, [Tsing] achieves a writing style that is both pleasurable and informative."—Laura L B Graham, Environment & Planning

"Friction is not only an engrossing display of ethnographic reports on the destruction of Kalimantan forests and local attempts to resist it. The book also proposes a highly original perspective of the global thrust of capital. Anna Tsing is at best when she describes the way capital produces an expanding 'frontier culture': a dense and murky story of fragments and fluidity, of hurdles and clashes that disrupt the neo-liberal theater of clarity. For an Indonesian reader, her work is a gift; it hints at the feasibility of hope—or at least the mingling of despair and hope. For a thinking activist, it suggests a fresh theory of action. Introducing the notion of 'engaged universals,' it brings home the role of 'utopian critiques.'"—Goenawan Mohamad, author of Conversations with Difference

"Friction is a wonderful, moving, absolutely beautiful book. One of the most important books in anthropology to appear in the past decade, it defines a field rather than simply fitting into one. This is the first sustained ethnography by a major anthropologist of Indonesia to address the post-Soeharto period. For those of us now attempting to come to terms with a strange political landscape of instability, Tsing offers both illuminating insight and useful tools. Ethnographically rigorous, brilliantly perceptive, and passionately engaged, this is the kind of writing we would all like to be able to produce."—Mary Steedly, Harvard University, author of Hanging without a Rope

"Recently, many have written about a 'clash' of civilizations, ideas, knowledges, and cultural formations. Tsing's brilliant innovation in this book is to talk in terms of 'collaboration' rather than conflict. One of the many enjoyable aspects of Friction is its continuation of the story Tsing introduced in her previous book, of the original and creative program of scholarship she is famously known for. This will be a much-discussed contribution to the anthropology of cosmopolitanism and transnational interconnection."—Celia Lowe, University of Washington