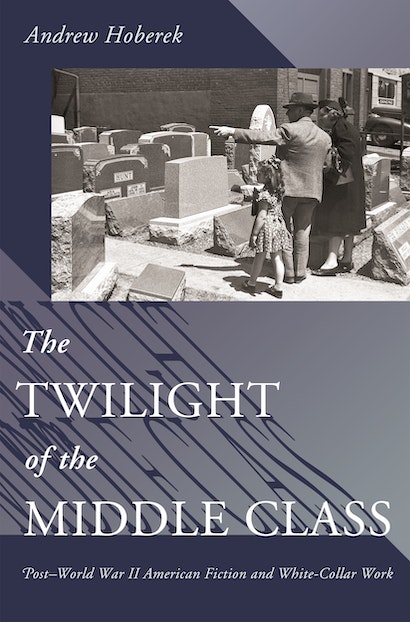 In The Twilight of the Middle Class, Andrew Hoberek challenges the commonly held notion that post-World War II American fiction eschewed the economic for the psychological or the spiritual. Reading works by Ayn Rand, Ralph Ellison, Saul Bellow, Phillip Roth, Flannery O’Connor, Thomas Pynchon, Don DeLillo, and others, he shows how both the form and content of postwar fiction responded to the transformation of the American middle class from small property owners to white-collar employees. In the process, he produces “compelling new accounts of identity politics and postmodernism that will be of interest to anyone who reads or teaches contemporary fiction.


Hoberek argues that despite the financial gains and job security enjoyed by the postwar middle class, the transition to white-collar employment paved the way for its current precarious state in a country marked by increasingly deep class divisions. Postwar fiction provided the middle class with various imaginative substitutes for its former property-owning independence, substitutes that since then have not only allowed but abetted this class’s downward mobility. To read this fiction in the light of the middle-class experience is thus not only to restore the severed connections between literary and economic “history in the second half of the twentieth “century, but to explore the roots of the contemporary crisis of the middle class.

Andrew Hoberek is Assistant Professor of English at the University of Missouri-Columbia.

"This excellent book offers an original and highly provocative argument about a vital period of American literary and cultural history. Bold and often brilliant, its graceful expository style illuminates an impressively wide range of material without ever becoming scholastic. Most importantly, it proposes new and highly plausible ways of understanding the significance of a number of important literary works."—Sean McCann, Wesleyan University, author of Gumshoe America

"The Twilight of the Middle Class is a powerful, well-researched, and unique piece of scholarship that fills a gap in current approaches to Cold War era fiction by situating it within the economic framework that shaped it. Through perceptive and fresh readings of Ayn Rand, Ralph Ellison, Flannery O'Connor, and Saul Bellow, its author demonstrates that the era's fiction is preoccupied with the problem of the 'organization man,' who translates concerns about class into concerns about individual autonomy—and by doing so universalizes his economically specific complaint into a shared human condition."—Rachel Adams, Columbia University, author of Sideshow U.S.A