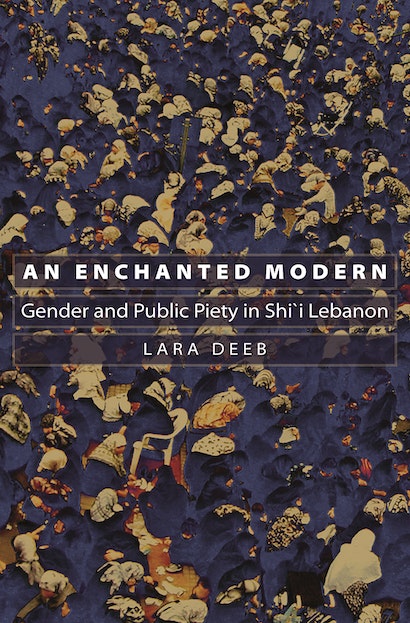 Based on two years of ethnographic research in the southern suburbs of Beirut, An Enchanted Modern demonstrates that Islam and modernity are not merely compatible, but actually go hand-in-hand. This eloquent ethnographic portrayal of an Islamic community articulates how an alternative modernity, and specifically an enchanted modernity, may be constructed by Shi’I Muslims who consider themselves simultaneously deeply modern, cosmopolitan, and pious.


In this depiction of a Shi’I Muslim community in Beirut, Deeb examines the ways that individual and collective expressions and understandings of piety have been debated, contested, and reformulated.


Women take center stage in this process, a result of their visibility both within the community, and in relation to Western ideas that link the status of women to modernity. By emphasizing the ways notions of modernity and piety are lived, debated, and shaped by “everyday Islamists,” this book underscores the inseparability of piety and politics in the lives of pious Muslims.

Lara Deeb is a cultural anthropologist and Assistant Professor of Women's Studies at the University of California, Irvine.

"Lara Deeb successfully argues that Islamism is not static or monolithic, and that Islam and modernity are entirely compatible."—Nancy E. Gallagher, Digest of Middle East Studies

"Lara Deeb's expansive and eloquent ethnography focuses on the community of Lebanese Shi'i who identify with Hizbullah. It is an excellent analysis of the way that women, in particular, live and define a modern, 'authenticated' Islam in the neighborhoods of al-Dahiyya.... Both theoretically and ethnographically, Deeb offers nuanced and thorough analyses, all the while being attentive to overlapping, contradictory, and shifting viewpoints."—Anne Bennett, Middle East Journal

"In a well-organized manner, Lara Deeb conveys a multiplicity of ideas that challenge the existing stereotypes of Hizbullah and the Lebanese Shi'i.... I would recommend this book for a variety of classes, ranging from undergrads to doctoral candidates, as well as for anyone interested in political and religious issues in Lebanon and the Middle East."—Bridget Blomfield, American Journal of Islamic Social Scientists

"An American anthropologist of Lebanese descent and raised Christian, Lara Deeb . . . provides a novel interpretation of modern Shi'ism. Her book is written in an academically and scholarly fashion, yet her writing style is easy to understand. In a well-organized manner, she conveys a multiplicity of ideas that challenge the existing stereotypes of Hizbullah and the Lebanese Shi'i. Since she is not Shi'i, she does not express a religious agenda but instead wholeheartedly represents a group of people who have been widely misunderstood in the West. I would recommend this book for a variety of classes, ranging from undergrads to doctoral candidates, as well as for anyone interested in political and religious issues in Lebanon and the Middle East."—Bridget Blomfield, American Journal of Islamic Social Sciences

"Deeb provides insights into the complex understandings of the religious and the secular that inform individual and collective expressions of piety among Shia Muslims."—Amina Jamal, Journal of Middle East Women's Studies

"A remarkable book that opens new vistas on Shi'I Islam and offers the reader a richly textured and insight-filled excursion into a contemporary Shi'I community. It will become the source on contemporary Shi'ism in Lebanon."—A. R. Norton, Boston University

"Well-written, timely, original and extremely interesting. This book is at the cutting edge of scholarship on Muslim communities, particularly with respect to Shi'i Muslim women."—Nadje S. Al-Ali, University of Exeter