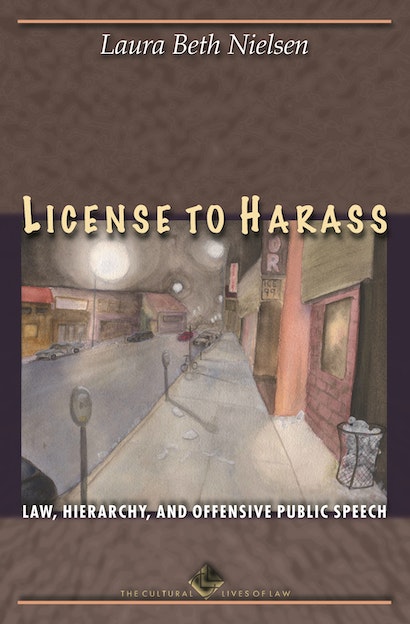 Offensive street speech — racist and sexist remarks that can make its targets feel both psychologically and physically threatened — is surprisingly common in our society. Many argue that this speech is so detestable that it should be banned under law. But is this an area covered by the First Amendment right to free speech? Or should it be banned?


In this elegantly written book, Laura Beth Nielsen pursues the answers by probing the legal consciousness of ordinary citizens. Using a combination of field observations and in-depth, semistructured interviews, she surveys one hundred men and women, some of whom are routine targets of offensive speech, about how such speech affects their lives. Drawing on these interviews as well as an interdisciplinary body of scholarship, Nielsen argues that racist and sexist speech creates, reproduces, and reinforces existing systems of hierarchy in public places. The law works to normalize and justify offensive public interactions, she concludes, offering, in essence, a “license to harass.”


Nielsen relates the results of her interviews to statistical surveys that measure the impact of offensive speech on the public. Rather than arguing whether law is the appropriate remedy for offensive speech, she allows that the benefits to democracy, to community, and to society of allowing such speech may very well outweigh the burdens imposed. Nonetheless, these burdens, and the stories of the people who bear them, should not remain invisible and outside the debate.

Laura Beth Nielsen is currently Research Fellow at the American Bar Foundation and will be Assistant Professor of Sociology and Law at Northwestern University beginning in the fall of 2006. She is the editor, with Robert L. Nelson, of Handbook of Employment Discrimination Research: Rights and Realities.

"The author has written a compelling text that not only highlights the problem of offensive public speech experienced daily by ordinary citizens but broadens our understanding of this noxious issue."—Susan Fineran, American Journal of Sociology

"Terrific! There are many powerful ideas in this book and they are presented in an elegant way that undergraduates can read easily and that mature scholars will appreciate."—Michael McCann, University of Washington

"An important contribution to the scholarly debate on the effects of speech, the need for regulation, and individuals' reaction to and understanding of legal rules. It offers sophisticated insights that will intrigue Nielsen's academic audience, yet at the same time it is also blessedly free of specialized jargon, making it a well-written book that is accessible to undergraduates as well."—Steven B. Lichtman, Law and Politics Book Review