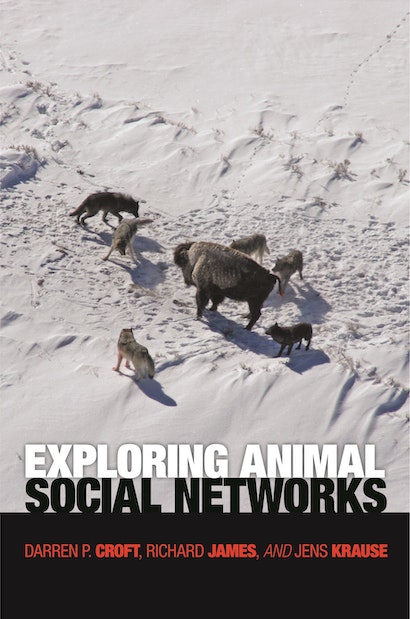 Social network analysis is used widely in the social sciences to study interactions among people, groups, and organizations, yet until now there has been no book that shows behavioral biologists how to apply it to their work on animal populations. Exploring Animal Social Networks provides a practical guide for researchers, undergraduates, and graduate students in ecology, evolutionary biology, animal behavior, and zoology.


Existing methods for studying animal social structure focus either on one animal and its interactions or on the average properties of a whole population. This book enables researchers to probe animal social structure at all levels, from the individual to the population. No prior knowledge of network theory is assumed. The authors give a step-by-step introduction to the different procedures and offer ideas for designing studies, collecting data, and interpreting results. They examine some of today’s most sophisticated statistical tools for social network analysis and show how they can be used to study social interactions in animals, including cetaceans, ungulates, primates, insects, and fish. Drawing from an array of techniques, the authors explore how network structures influence individual behavior and how this in turn influences, and is influenced by, behavior at the population level. Throughout, the authors use two software packages — UCINET and NETDRAW — to illustrate how these powerful analytical tools can be applied to different animal social organizations.

"Exploring Animal Social Networks shows behavioral biologists how to apply social network theory to animal populations. In doing so, Croft, James, and Krause illustrate the connections between an animal's individual behaviors and how these, in turn, influence and are influenced by behavior at the population level. . . . Valuable for readers interested in using quantitative analyses to study animal social behaviors."—Choice

"[T]his volume provides an engaging, accessible, and timely introduction to the use of network theory methods for examining the social behavior of animals."—Noa Pinter-Wollman, Quarterly Review of Biology

"I love this book. . . . [T]he authors have produced a volume that is well written and informative, but mostly I love it because Exploring Animal Social Networks is really useful. . . . I suspect that this book will change the life history of network analysis application in animal behaviour, shortening the juvenile period and ushering us more quickly into adulthood."—Richard Connor, Animal Behavior

"The behavioural scientist interested in the wider picture of how their work fits into the world of networks is recommended this book as a first port of call for classic citations."—Sean A. Rands, Applied Animal Behaviour Science

"The book is a useful 'handbook' providing detailed, stepwise procedures sufficient to allow the reader to address a broad range of questions about social interactions. . . . The book includes numerous examples of the kind of research questions one might ask, and, thus, it allows the reader to find the analysis that best fits the data set to be analyzed. Thus, even readers with minimal prior knowledge of social network analysis will be able to apply this approach. And if further assistance is needed, the authors provide numerous references to specific procedures that have been used by others."—Thomas R. Zentall, PsycCRITIQUES

"An important and timely addition to the literature. This book should be readily accessible to researchers who are interested in animal social organization but who have little or no experience in conducting network analysis. The book is well-written in an engaging style and contains a good number of examples drawn from a range of taxonomic groups."—Paul R. Moorcroft, Harvard University

"This book introduces ecologists, behaviorists, and others studying social behavior to the methods of network analysis. It is clearly written and accessible to readers whose primary training is in biology, not physics, mathematics, or sociology—the fields in which network techniques have largely been developed. The book is method oriented, so that it can serve as a practical guide to how readers can analyze their own data."—Stephen C. Pratt, Arizona State University

"No such book of this kind exists, and because it fills a new niche it will be important. New graphical and analytical techniques are emerging that provide insights into how networks form and function. This book is designed as a primer to introduce students, especially graduate students, to these techniques by using and interpreting examples from animal interactions. For anyone interested in networks, this book will be a useful guide."—Daniel I. Rubenstein, Princeton University