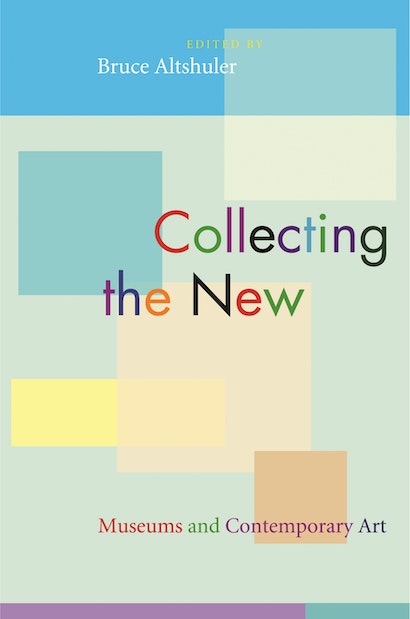 Collecting the New is the first book on the questions and challenges that museums face in acquiring and preserving contemporary art. Because such art has not yet withstood the test of time, it defies the traditional understanding of the art museum as an institution that collects and displays works of long-established aesthetic and historical value. By acquiring such art, museums gamble on the future. In addition, new technologies and alternative conceptions of the artwork have created special problems of conservation, while social, political, and aesthetic changes have generated new categories of works to be collected.


Following Bruce Altshuler’s introduction on the European and American history of museum collecting of art by living artists, the book comprises newly commissioned essays by twelve distinguished curators representing a wide range of museums. First considered are general issues including the acquisition process, and collecting by universal survey museums and museums that focus on modern and contemporary art. Following are groups of essays that address collecting in particular media, including prints and drawings, new (digital) media, and film and video; and national- and ethnic-specific collecting (contemporary art from Asia, Africa, and Latin America, and African-American art). The closing essay examines the conservation problems created by contemporary works — for example, what is to be done when deterioration is the artist’s intent?

"In this volume of thoughtful essays, curators, conservators, scholars, and others in the museum world address how institutions should collect, exhibit, and care for the new art. . . [T]he essays by seasoned professionals bring a new dimensions to the museum-going experience."—Ann Landi, ArtNews

"This book is a sensitively-edited collection of twelve essays (including a historical introduction by the editor), which addresses the complexity of the problems and issues that Western museums confront in dealing with contemporary art today. With its selection of diverse and intriguing case studies and specific focus on the contemporary art scene, it is an important and welcome addition to one of the primary fields of museum studies concerning the significance of collecting and collections for museums."—Masaaki Morishita, Museum and Society

"By bringing together such a diverse range of informed voices, this book wonderfully succeeds in suggesting not merely as theory, but with the nitty-gritty feel of reality the very specific considerations that a museum's staff must take into account in determining whether or not to acquire, whether by gift or purchase, any particular work of art. I know of no other English-language publication that has previously addressed this issue with comparable depth or breadth."—Stephen E. Weil, Scholar Emeritus, Smithsonian Center for Education and Museum Studies, author of Making Museums Matter

"Particularly well-organized and accessibly written, this book explores the collecting and preservation of contemporary art created in a wide range of media. Its variety of essays, especially those addressing different types of institutions and various spheres of ethnicity and region, provides a very rich, stimulating, and useful introduction to this important topic."—Jeffrey Abt, Wayne State University