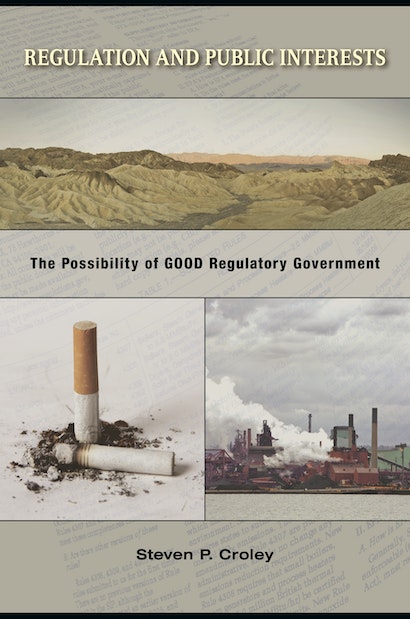 Not since the 1960s have U.S. politicians, Republican or Democrat, campaigned on platforms defending big government, much less the use of regulation to help solve social ills. And since the late 1970s, “deregulation” has become perhaps the most ubiquitous political catchword of all. This book takes on the critics of government regulation. Providing the first major alternative to conventional arguments grounded in public choice theory, it demonstrates that regulatory government can, and on important occasions does, advance general interests.


Unlike previous accounts, Regulation and Public Interests takes agencies’ decision-making rules rather than legislative incentives as a central determinant of regulatory outcomes. Drawing from both political science and law, Steven Croley argues that such rules, together with agencies’ larger decision-making environments, enhance agency autonomy. Agency personnel inclined to undertake regulatory initiatives that generate large but diffuse benefits (while imposing smaller but more concentrated costs) can use decision-making rules to develop socially beneficial regulations even over the objections of Congress and influential interest groups. This book thus provides a qualified defense of regulatory government. Its illustrative case studies include the development of tobacco rulemaking by the Food and Drug Administration, ozone and particulate matter rules by the Environmental Protection Agency, the Forest Service’s “roadless” policy for national forests, and regulatory initiatives by the Securities and Exchange Commission and the Federal Trade Commission.

Steven P. Croley is professor of law at the University of Michigan Law School. He earned a J.D. from Yale Law School and a Ph.D. in politics from Princeton University.

"Croley has done much more than write a lucid and learned book. His analysis of the behavior of agencies is an important contribution to our understanding of government regulation. . . . His argument that agencies possess autonomy stands as a lasting contribution to our grasp of regulatory action. . . . Croley has written an important and creative book. Agenda number one of this book—a serious critique of public choice theory—is successful in many ways. With great care, Croley lays out the elements of the theory and systematically critiques it. Such a comprehensive corrective is long overdue."—M. Elizabeth Magill, Michigan Law Review

"Steven Croley . . . has written an ambitious and valuable book. . . . The book should be illuminating and useful for political scientists and legal scholars interested in regulatory policy, the politics of regulation, public administration, and administrative law. Regulation and Public Interests would be an excellent book for graduate courses in any of those fields."—Robert A. Kagan, Law & Politics Book Review

"Steven Croley . . . has written an ambitious and valuable book. It offers a strong defense of the American regulatory state and the role of administrative procedure in encouraging good regulatory governance. The book should be illuminating and useful for political scientists and legal scholars interested in regulatory policy, the politics of regulation, public administration, and administrative law. Regulation And Public Interests would be an excellent book for graduate courses in any of those fields."—Robert A. Kagan, Department of Political Science and School of Law, University of California, Berkeley

"This valuable book thoroughly documents the public choice critique against government regulation working well. The net result is that the reader has the impression of having done battle with this standard argument about why regulation can't work well, and then seen compelling evidence that it can. The presentation is solid and engaging."—Paul Teske, University of Colorado at Denver

"This book marks the first extended effort to develop a full-fledged alternative theory of why the existing regulatory state—to which we, as a nation, are clearly and probably irrevocably committed—might indeed be capable of furthering the public interest."—Cynthia Farina, Cornell University Law School