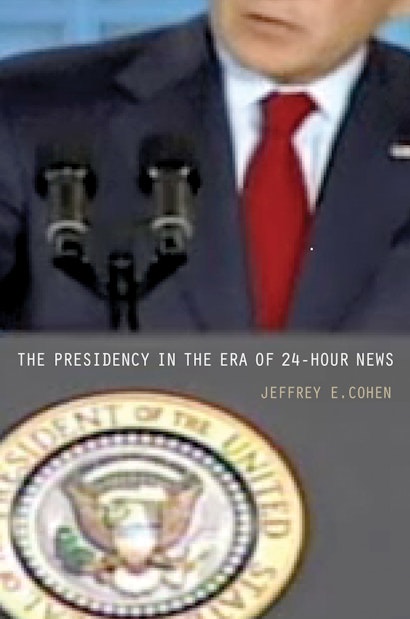 The Presidency in the Era of 24-Hour News examines how changes in the news media since the golden age of television — when three major networks held a near monopoly on the news people saw in the United States — have altered the way presidents communicate with the public and garner popular support. How did Bill Clinton manage to maintain high approval ratings during the Monica Lewinsky scandal? Why has the Iraq war mired George Bush in the lowest approval ratings of his presidency? Jeffrey Cohen reveals how the decline of government regulation and the growth of Internet and cable news outlets have made news organizations more competitive, resulting in decreased coverage of the president in the traditional news media and an increasingly negative tone in the coverage that does occur. He traces the dwindling of public trust in the news and shows how people pay less attention to it than they once did. Cohen argues that the news media’s influence over public opinion has decreased considerably as a result, and so has the president’s ability to influence the public through the news media. This has prompted a sea change in presidential leadership style. Engaging the public less to mobilize broad support, presidents increasingly cultivate special-interest groups that often already back the White House’s agenda.


This book carries far-reaching implications for the future of presidential governance and American democracy in the era of new media.

Jeffrey E. Cohen is professor of political science at Fordham University. He is the author of Presidential Responsiveness and Public Policy-Making.

"Cohen has constructed a revised and refined version of the 'presidential news system' (the president, the news media, and the mass public) paradigm. He argues that as the 'golden age of television' evolved into the age of the new media in the late 1970s and early 1980s, a growing disconnect between the news and presidential support (approval) became apparent. Thoroughly grounded in political communication theory, this book is an excellent read on changes in presidential governance."—W. K. Hall, Choice

"Theoretically, the book provides an important contribution. . . . Methodologically, it . . . enables the reader to gain a broad overview of basic literature and research collated in a single book. . . . The book is a good resource."—Pinar Sayan, In-Spire Journal of Law, Politics, and Societies

"This is an audacious attempt to provide an empirically based interpretation of the impact of a changing media environment on the power of the American presidency. In just over 200 pages Cohen develops a complex and multifaceted argument that should be widely read by students of American politics and of the interface between the media and politics more broadly."—Robin Brown, Political Studies Review

"The Presidency in the Era of 24-Hour News stands as a welcome addition to the literature, particularly appropriate for assignment to upper-division courses on the presidency. Furthermore, Cohen's book belongs in an elite class of public presidency scholarship from this decade . . . that merit mandatory inclusion on graduate presidential politics seminar syllabi."—Justin S. Vaughn, Political Science Quarterly

"[I]f Cohen does not find empirical resolution to the puzzles of the presidential news system, he does the next best thing by skillfully illuminating important targets of inquiry for future research. For this he is to be commended, and The Presidency in the Era of 24-Hour News deserves a wide audience."—Glenn W Richardson, Presidential Studies Quarterly

"This is a stunning book on how the emergence of new media has transformed the president's place in our democracy. Jeffrey Cohen shows how the evolving nature of media stunts presidential power and causes the president to focus on narrow slices of citizens rather than the public at large. His findings accentuate the new challenges facing America's democracy in the twenty-first century."—James N. Druckman, Northwestern University

"A very substantial contribution to the field. The conception of the interplay between the media system and the presidency that is provided by the author is more accurate than existing ones. This book should attract a fairly wide readership."—Thomas E. Patterson, Harvard University

"This book tackles important issues in the relationship between the president, the media, and the public. It makes a provocative argument about how changes in the relationship between these three parties have affected the ability of the news to affect presidents and the ability of presidents to lead. The big picture of this book is really interesting and important."—David E. Lewis, Princeton University

"A very impressive piece of scholarship. Cohen addresses a very important question: how have changes in the way American citizens obtain political information, as well as changes in the nature of that information, influenced presidential governing strategies. Furthermore, the book is very well grounded theoretically."—David C. Barker, University of Pittsburgh

"This book makes an important statement. I have seen no other recent book like it in terms of historical scope or nuanced understanding of the multiple factors that condition presidential communication in the age of new media. It has much to commend it to both scholarly and general audiences."—Scott Althaus, University of Illinois, Urbana-Champaign