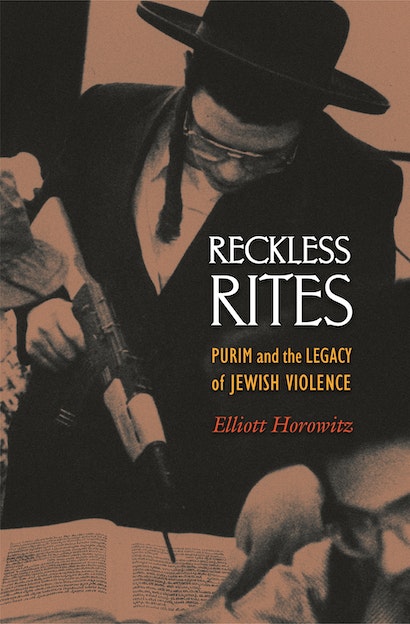 Historical accounts of Jewish violence — particularly against Christians — have long been explosive material. Some historians have distorted these records for anti-Semitic purposes. Others have discounted, dismissed, or simply ignored the evidence, often for apologetic purposes.

In Reckless Rites, Elliott Horowitz takes a new and forthright look at both the history of Jewish violence since late antiquity and the ways in which generations of historians have grappled with that history. In the process, he has written the most wide-ranging book on Jewish violence in any language, and the first to fully acknowledge and address the actual anti-Christian practices that became part of the playful, theatrical violence of the Jewish festival of Purim. He has also examined the different ways in which the book of Esther, upon which the festival is based, was used by Jews and Christians over the centuries — whether as an ancient mirror of modern tribulations or as the scriptural basis for anti-Semitic claims regarding the bloodthirstiness of the Jews.

Reckless Rites reassesses the historical interpretation of Jewish violence — from the alleged massacre of thousands of Christians in seventh-century Jerusalem to later medieval attacks on Christian symbols such as the crucifix, transgressions that were often committed in full knowledge that their likely consequence would be death.


A book that calls for major changes in the way that Jewish history is written and conceptualized, Reckless Rites will be essential reading for scholars and students of history, religion, and Jewish-Christian relations.

Elliott Horowitz, a native of New York City, is Associate Professor of Jewish History at Bar-Ilan University, Israel. He is coeditor of the Jewish Quarterly Review.

"[A] dazzlingly erudite study of the many ramifications of the Purim odyssey from medieval times to our days. Horowitz's ambitious book achieves two accomplishments: the documentation of 1,500 years of Christian and Jewish interpretations of the knottiest, and naughtiest, sections of the Book of Esther, and then the chronicling of the actual social-historical consequences of those interpretations; that is, how Purim was used and abused through the ages. [Horowitz's is] a scrupulously honest voice, dealing in exemplary fashion with an important subject that has been ignored by scholars precisely because of its extreme delicacy. Horowitz has enriches us with a model of historical scholarship. Anything but reckless, Reckless Rites is a rare gem of academic work that will make a real difference."—Allan Nadler, Forward

"Reckless Rites is a provocative volume, rich in historical detail. Horowitz tells a story, not without humor, that attempts to connect events of the distant past with contemporary conflicts. Unusual for a work of history, Reckless Rites is also a good read."—Irven M. Resnick, AJS Review

"Reckless Rites is an excellent read, and for a book on such a serious subject not devoid of humor. . . . [I]t's most important purpose . . . is to throw a very large bucket of cold water over the misconceptions and the willful misreading of history in which we all too easily indulge."—Rabbi Dr. Charles Middleburgh, Jewish Chronicle

"In his new book, Elliot Horowitz attempts to undermine the conventional wisdom about Jews and violence. Focusing on Purim, he convincingly shows that the image passed down over the centuries, of Jewish passivity and nonviolence during the medieval period, is, if not wrong, at least in need of correction. . . . [A] thought-provoking book, whose trees are often as memorable as the forest."—Kalman Neuman, Jerusalem Report

"The book is a valuable contribution to what appeared to be an already enormous volume of religious history. The author's presentation of a well-researched and thoroughly analyzed history of Jewish violence that accompanies a sacred festival makes this an extraordinary book."—Willem F M Luyt, Studia Historiae Ecclesiasticae

"Elliott Horowitz's learned, humane, and exciting book will rattle many platitudes and disturb many pieties. Purim will never be quite the same; and the complications that Horowitz introduces into the history of Jewish self-representation will be ferociously debated for many years to come. Horowitz's lack of interest in edification is itself edifying; his love of truth is fully the match of his love of tradition. Reckless Rites is a model of the lost art of troublemaking scholarship."—Leon Wieseltier

"This is a book of tremendous importance that explores some of the most significant themes in Jewish history, especially the relations between Jews and Christians and the question of Jewish passivity and meekness. Horowitz disputes scholarly and popular accounts that ascribe these characteristics to Jews, in part by showing that both Jews and Christians have had polemical and apologetic motives in making such representations. This book represents a vitally significant reorientation of Jewish historiography. It will be controversial, no doubt, but it is certain to be a turning point in the field."—Daniel Boyarin, Hermann P. and Sophia Taubman Professor of Talmudic Culture, departments of Near Eastern Studies and Rhetoric, University of California, Berkeley

"Reading Elliott Horowitz is always a treat and an education. He has an unusually keen eye for topics that other scholars have bypassed, and his work reveals extraordinarily wide reading—not only of Jewish sources but also texts that few Jewish historians would bother opening. And he follows the sources wherever they lead, regardless of conclusions that may startle or even affront readers. Reckless Rites will raise the eyebrows and perhaps elevate the blood pressure of some readers, but it illuminates dark corners of the Jewish past."—Marc Saperstein, Charles E. Smith Professor of Jewish History and Director of the Judaic Studies Program, George Washington University