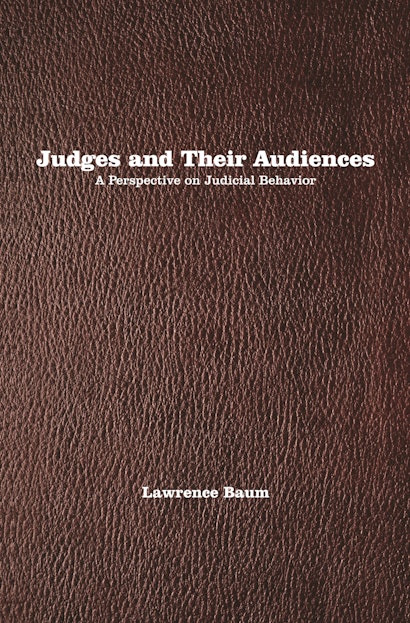 What motivates judges as decision makers? Political scientist Lawrence Baum offers a new perspective on this crucial question, a perspective based on judges’ interest in the approval of audiences important to them.


The conventional scholarly wisdom holds that judges on higher courts seek only to make good law, good policy, or both. In these theories, judges are influenced by other people only in limited ways, in consequence of their legal and policy goals. In contrast, Baum argues that the influence of judges’ audiences is pervasive. This influence derives from judges’ interest in popularity and respect, a motivation central to most people. Judges care about the regard of audiences because they like that regard in itself, not just as a means to other ends. Judges and Their Audiences uses research in social psychology to make the case that audiences shape judges’ choices in substantial ways. Drawing on a broad range of scholarship on judicial decision-making and an array of empirical evidence, the book then analyzes the potential and actual impact of several audiences, including the public, other branches of government, court colleagues, the legal profession, and judges’ social peers.


Engagingly written, this book provides a deeper understanding of key issues concerning judicial behavior on which scholars disagree, identifies aspects of judicial behavior that diverge from the assumptions of existing models, and shows how those models can be strengthened.

Lawrence Baum is professor of political science at Ohio State University. He is a student of judicial politics, with a primary interest in explanation of judicial behavior. His previous books include include American Courts, The Supreme Court, and The Puzzle of Judicial Behavior.

"Judges and Their Audiences constitutes an impressive scholarly achievement in its expansive analysis of the existing literature. . . . Lawrence Baum argues that judges, like most human beings, are often sensitive to and seek the approbation of others within their social and professional milieu. . . . One theme runs throughout the empirical chapters: the vitality of a given precedent has an important effect on the manner in which later courts use that precedent to justify legal outcomes."—Stefanie A. Lindquist, Law and Politics Book Review

"Lawrence Baum employs a range of empirical evidence on courts, combining the literatures on judicial decision making and social psychology to examine the influence of the legal profession, the media, and close colleagues on the self-presentation of judges."—Law & Social Inquiry

"An original contribution to the study of judicial politics that draws from the field of social psychology to suggest a radically new approach to the study of decisional behavior."—Sheldon Goldman, University of Massachusetts, Amherst

"This book makes a very strong case that we need to begin to look at judicial behavior in a way that is not reflected in any of the most significant recent work. It will change the way many scholars think about the courts."—Donald Songer, University of South Carolina