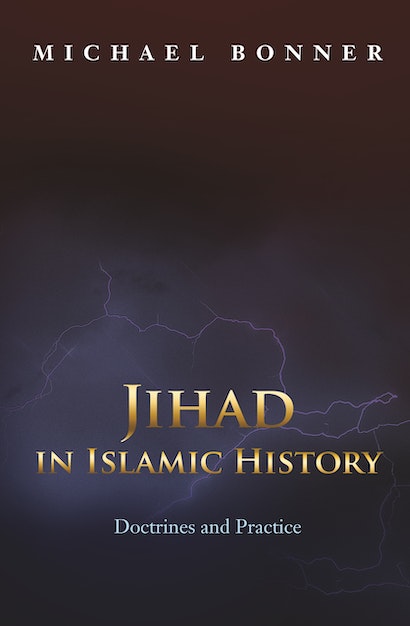 What is jihad? Does it mean violence, as many non-Muslims assume? Or does it mean peace, as some Muslims insist? Because jihad is closely associated with the early spread of Islam, today’s debate about the origin and meaning of jihad is nothing less than a struggle over Islam itself. In Jihad in Islamic History, Michael Bonner provides the first study in English that focuses on the early history of jihad, shedding much-needed light on the most recent controversies over jihad.


To some, jihad is the essence of radical Islamist ideology, a synonym for terrorism, and even proof of Islam’s innate violence. To others, jihad means a peaceful, individual, and internal spiritual striving. Bonner, however, shows that those who argue that jihad means only violence or only peace are both wrong. Jihad is a complex set of doctrines and practices that have changed over time and continue to evolve today. The Quran’s messages about fighting and jihad are inseparable from its requirements of generosity and care for the poor. Jihad has often been a constructive and creative force, the key to building new Islamic societies and states. Jihad has regulated relations between Muslims and non-Muslims, in peace as well as in war. And while today’s “jihadists” are in some ways following the “classical” jihad tradition, they have in other ways completely broken with it.


Written for general readers who want to understand jihad and its controversies, Jihad in Islamic History will also interest specialists because of its original arguments.

Michael Bonner is Professor of Medieval Islamic History at the University of Michigan. Jihad in Islamic History originally appeared in French as Le Jihad: origines, interprétations, combats. Bonner is also the author of Aristocratic Violence and Holy War: Studies in the Jihad and the Arab-Byzantine Frontier and Arab-Byzantine Relations in Early Islamic Times.

"Viewing what has become an increasingly crowded field, [Bonner] points out that the word jihad has acquired different resonances for a wide variety of actors, from the Islamist radicals for whom it forms the heart of a militant ideology to mystical quietists who regard the 'greater jihad' as the struggle against the 'lower self' of baser human impulses."—Malise Ruthven, New York Review of Books

"Bonner's Jihad in Islamic History is a first-class work that should be highly useful as an introduction to the basic issues and history of the subject, and despite its conciseness contains information interesting even for the more specialized scholar."—David Cook, Middle East Journal

"Bonner . . . provides a cogent yet detailed historical survey of the concept and practice of jihad in Muslim societies. His book is a much-needed counter to the poorly researched or downright biased and alarmist cluster of publications that were quickly written and released after September 11, 2001. . . . The book is easily accessible to the nonspecialist, and is ideal for use in an upper-level undergraduate topics course in Middle Eastern and Islamic history or Islamic religious thought. Bonner's work is also a useful primer for specialists which does not sacrifice quality for brevity."—Christopher Anzalone, Religious Studies Review

"Michael Bonner brings to the subject a sober, forensic approach grounded in sound historiography and a firm grasp of primary sources. . . . The author is to be commended for having provided an accessible, broad historical survey of the mercurial term 'jihad' and its deployment over time. Both the specialist and the nonspecialist will benefit from this study. This slim book is not exhaustive in its approach, nor does it claim to be. But it asks all the right questions and broadly indicates the directions in which future scholarship on jihad as both an institution and a multivalent concept may fruitfully venture."—Asma Afsaruddin, Speculum

"[T]his is a very interesting and useful little book both from the perspective of history and the emergence of Islamic thought and culture. It also includes a useful bibliography and index. The author should be congratulated for his thoughtful and stimulating contribution to the contemporary discourse on the Islamic concept of Jihad, warfare and peace."—Muhammad Khan, Muslim News

"At a time in history when there is a crucial struggle for the soul of the Islamic world, Bonner has provided a road map for scholars and students alike attempting to make sense of the myriad of competing claims. This is a welcome addition to the literature on jihad indeed."—Lewis Brownstein, Ph.D., Association for the Study of the Middle East and Africa

"Bonner has been very successful in preparing an introduction to the doctrine and practises of jihad in early Islamic history that can initiate students to the first period Islamic history and early interpretations of jihad. Moreover, there is also a useful commented bibliography at the end of each chapter."—Michelangelo Guida, Turkish Journal of Islamic Studies

"Michael Bonner's book is by far the best treatment of this important subject in English, and very useful to general historians of the Middle East."—Roy P. Mottahedeh, Harvard University

"This is an excellent and erudite contribution to the field that, due to Bonner's pleasant and clear style, is easily accessible to students and nonspecialists. The book's value lies in its contextualizing of the notion of jihad. It covers the entire Islamic era, tracing how the notion of jihad emerged and developed within a certain historical framework."—Rudolph Peters, University of Amsterdam, author of Jihad in Classical and Modern Islam: A Reader

"A fine contribution to the literature on jihad."—John Kelsay, Florida State University, author of Islam and War

"Jihad in Islamic History is a very helpful overview of the various appropriations of jihad and concepts of warfare and fighting in Islamic history, especially the early period. It is particularly good on the sources, their varying purposes, and the debates today over their validity in trying to explain the rise of Islam and early Islamic history in general. As the only major overview of jihad focusing on the premodern period, the study will stand alone."—Paul Heck, Georgetown University, author of The Construction of Knowledge in Islamic Civilization