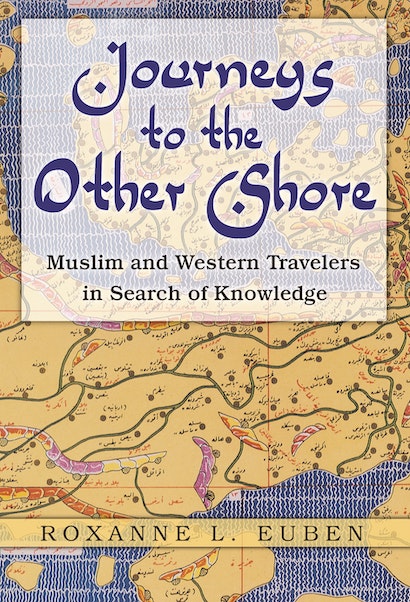 The contemporary world is increasingly defined by dizzying flows of people and ideas. But while Western travel is associated with a pioneering spirit of discovery, the dominant image of Muslim mobility is the jihadi who travels not to learn but to destroy. Journeys to the Other Shore challenges these stereotypes by charting the common ways in which Muslim and Western travelers negotiate the dislocation of travel to unfamiliar and strange worlds. In Roxanne Euben’s groundbreaking excursion across cultures, geography, history, genre, and genders, travel signifies not only a physical movement across lands and cultures, but also an imaginative journey in which wonder about those who live differently makes it possible to see the world differently.


In the book we meet not only Herodotus but also Ibn Battuta, the fourteenth-century Moroccan traveler. Tocqueville’s journeys are set against a five-year sojourn in nineteenth-century Paris by the Egyptian writer and translator Rifa’a Rafi’ al-Tahtawi, and Montesquieu’s novel Persian Letters meets with the memoir of an East African princess, Sayyida Salme.


This extraordinary book shows that curiosity about the unknown, the quest to understand foreign cultures, critical distance from one’s own world, and the desire to remake the foreign into the familiar are not the monopoly of any single civilization or epoch. Euben demonstrates that the fluidity of identities, cultures, and borders associated with our postcolonial, globalized world has a long history — one shaped not only by Western power but also by an Islamic ethos of travel in search of knowledge.

Roxanne L. Euben is the Ralph Emerson and Alice Freeman Palmer Professor of Political Science at Wellesley College. She is the author of Enemy in the Mirror: Islamic Fundamentalism and the Limits of Modern Rationalism (Princeton).

"A path breaking book. . . . [Euben] makes clear the unsatisfactory nature of the representational categories of 'Islam' and the 'West', which have come to have such dangerous weight for extremist thinkers, both Western and Islamic, in the contemporary world. . . . The arguments of this book are important, persuasive and nuanced."—Francis Robinson, Times Literary Supplement

"Thoroughly grounded in Arabic as well as Western sources, Euben has produced a remarkable book of great value both for its contribution to specialist scholarship, and for its relevance to the urgent public policy debates of our troubled times."—Donald Malcolm Reid, International History Review

"In this highly stimulating book . . . Roxanne Euben examines the role of travel in the formation of one's picture of societies Islamic and Western. She is one of the rare scholars who can demonstrate thorough knowledge of both the Islamic and European material—classical Greek, English and French literature (the last in translation)."—Ahmad Gunny, Journal of Islamic Studies

"This well-argued book breaks new ground in the conceptualization of travel relevant to political theory and cultural studies, and provides arguments that are rooted in close analysis of texts across time about how the politics and mechanisms that inform travel could be relevant to bridging the gap between the so-called West and the world of Islam. Through this analysis, Euben challenges the misconceptions that frame the Islamic world as insular and immobile and the West as the realm of mobility and cosmopolitanism; in this she provides a critical and timely corrective, especially in the post-9/11 world where pundits and proselytizers alike prefer broad and unexamined stereotypes rather than historicized critical readings."—Ahmed Idrissi Alami, Studies in Travel Writing

"In this unusually elegant book, Roxanne Euben engages comparative political theory, an enterprise she has shaped decisively—one might well argue that she has conceived it in its present form. Here, she wears her erudition lightly, but it is very much present. She moves easily between languages and literatures, with a profound sense of historical context. She is at home in the Arabic language as few Western scholars are. There is little to say beyond praise for this work and its author."—Anne Norton, University of Pennsylvania, author of Leo Strauss and the Politics of American Empire

"This is a major book. It transcends the imagined great divide between East and West by examining the role of travel in shaping one's imagination of societies-both one's own and those of others. By giving equal weight to the sense of rootedness and difference in European and Muslim travel accounts, Roxanne Euben shows the fluid points of convergence and divergence in European and Muslim concepts of others. To paraphrase Claude Lévi-Strauss, Euben's book is good to think with."—Dale F. Eickelman, Dartmouth College