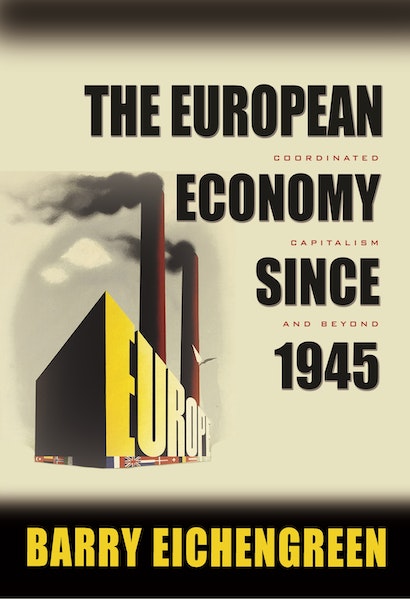 In 1945, many Europeans still heated with coal, cooled their food with ice, and lacked indoor plumbing. Today, things could hardly be more different. Over the second half of the twentieth century, the average European’s buying power tripled, while working hours fell by a third. The European Economy since 1945 is a broad, accessible, forthright account of the extraordinary development of Europe’s economy since the end of World War II. Barry Eichengreen argues that the continent’s history has been critical to its economic performance, and that it will continue to be so going forward.


However, this inheritance of economic and social institutions that was the solution until around 1973 — when Europe had to switch from growth based on brute-force investment and the acquisition of known technologies to growth based on increased efficiency and innovation — then became the problem.


Thus, the key questions for the future are whether Europe and its constituent nations can now adapt their institutions to the needs of a globalized knowledge economy, and whether in doing so, the continent’s distinctive history will be an obstacle or an asset.

Barry Eichengreen is George C. Pardee and Helen N. Pardee Professor of Economics and Political Science at the University of California, Berkeley. His books include Golden Fetters: The Gold Standard and the Great Depression, 1919-1939 and Globalizing Capital: A History of the International Monetary System (Princeton).

"In The European Economy Since 1945, Barry Eichengreen . . . presents not only a comprehensive account of Europe's postwar economic experience but also an important analysis of capitalist development more generally. . . . [B]y demonstrating how institutions helpful in one era can be counterproductive in another, Eichengreen has important lessons about the future to teach both policy makers and publics."—Sheri Berman, New York Times Book Review

"Eichengreen, even as he presents a lot of evidence, proves himself to be a master of exposition of the big story. And none could be bigger than the one contained in this book. History will judge it one of the most amazing achievements of the 20th century."—Huw Dixon, Times Higher Education Supplement

"This is a superb overview of a half century of European economic development."—Choice

"An excellent book. . . . I have never read a better [book] on what the European economies have done right and subsequently did wrong. . . . Eichengreen . . . believes that Europe can turn things around, without chucking the basic model, but he doesn't for a moment deny that Europe faces an economic crisis relative to the American model."—Tyler Cowen, Marginal Revolution

"A characteristic of the best histories is not just a good narrative but a compelling thread that runs through it. Barry Eichengreen's tour de force of postwar European history is that kind of book. . . . His thesis is that Europe's much maligned corporatist institutions played a significant role in achieving the postwar economic miracle, but that these institutions are insufficiently flexible to meet the 21st century's demands. . . . While there can be no such thing as a definitive history of Europe's postwar economy, Eichengreen at least comes close to providing a definitive history of European economic performance, a subject in which he excels. This is in itself no mean achievement."—Wolfgang Munchau, Financial Times

"For both Americans who want to understand Europe's successes and failures, and for Europeans who want to know where their continent was right and where it has gone wrong, Mr. Eichengreen has provided an excellent summary."—Daniel Pudles, The Economist

"This is a splendidly delivered analysis that helps us make sense of the reversal of growth fortunes experienced by the United States and Europe since the mid-1990s. . . . The European Economy is beautifully written and will be widely read."—Nicholas Crafts, Finance & Development

"It is rare indeed for an academic book on the fundamentals of European economic growth to be widely read and circulated outside of academic circles, but if any book deserves to be, it surely is Barry Eichengreen's The European Economy Since 1945. The book is an eloquently written analysis of how the economic and governmental institutions that formerly undergirded European economic growth have become, since the early 1970s, severe impediments to its growth. It is a must-read."—Jurgen Reinhoudt, American.com

"Many Eastern states have now joined the EU and made economic progress. Ambitions are high, but the author questions whether Europe can maintain its traditional communitarian ideals as global competition intensifies. Useful notes and bibliography."—Choice

"This book sets a new standard for surveys of the period, outclassing the essay collections that have concentrated on Western European experience and single-author narratives that have tended to make dreary reading. Eichengreen has produced an invigorating blend of synthesis and analysis that poses major questions about the nature and evolution of European economic growth, surveys economic arguments, and delivers sharp analysis and clear explanation for the major phases of economic growth and integration. . . . This is a landmark volume, by far the best available synthesis explaining European economic history since 1945, one ring pertinent comparison to U. S. experience that respect institutional differences and cultural preferences between countries. Its explanations and analysis are clear, concise, and engaging. Readers wishing more detail on the economic debates and national economic experiences red will appreciate the state-of-the-art bibliography. Don't miss it."—Kenneth Mouré, American Historical Review

"Barry Eichengreen's book The European Economy since 1945 presents a detailed introduction to the economic history of western Europe since World War II, plus a chapter on the history of central planning in eastern Europe and another on the process of transition from the economic environment typical of the Soviet Empire to a free-market environment and the European Union. Those who read it all will not be disappointed. They will find comprehensive information on the postwar situation and the reconstruction, as well as a thorough description of the integration process led to the Treaty of Rome (1957) and the European Union, with particular emphasis on the monetary aspects. The hurried reader will be satisfied, too, because each of Eichengreen's chapters can also be approached as a self-contained, well-researched, and thought-provoking essay in its own right, dealing clearly yet comprehensively with periods and episodes in recent western European history."—Enrico Colombatto, Independent Review

"Eichengreen's elegant history shows that Europe's economic performance in the second half of the twentieth century was a success because labour, capital and government committed to achieving both economic growth and stability."—Adam Fleisher, International Affairs

"Eichengreen has produced a readable and informative account of Europe's post-1945 economy. Drawing on a lengthy and up-to-date bibliography, he embeds a wealth of economic theories into a political and social context in a way that an intelligent layperson can understand. These strengths should enable the book to find its way into graduate courses on economic history."—Michael H. Creswell, The Historian

"The book's strength lies in its ability to create an economic macro-history based on an excellent processing of well-selected statistical data chosen with good reason that is often represented in carefully constructed diagrams. It is in this fusion of 'narrating' with 'showing', consisting of documentation processed on the basis of economic theory that the book, is uncommonly effective. . . . There is a lot to read and to think about in this ambitious book, which is constructed with precision and a notable ability for synthesis. To encourage the reader, it should be added that an excellent bibliography, a series of statistical data that is convincingly treated and adequately explained in the Appendix, and a very wide-ranging and carefully constructed index of subjects and authors quoted, facilitate his labours."—Piero Barucci, Journal of European Economic History

"Encompassing all of Europe, this magisterial book tells the story of how, during the second half of the twentieth century, high growth based on capital formation changed to low growth based on innovation. Eichengreen's masterful narrative never loses its focus while ranging far to integrate successfully international political contexts and informal economic conventions."—Peter J. Katzenstein, Cornell University

A magisterial achievement. This book shows in detail how institutions and policies explain the miraculous postwar recovery and the subsequent economic growth of Western Europe, how they flavored the economic experience of different countries, and how they determined and shaped the nature of coordination and cooperation among the European economies. It is deeply learned, using a huge variety of sources and data, always informed about the facts and at the same time based on sound economic analysis."—Joel Mokyr, Northwestern University, author of The Gifts of Athena

"Barry Eichengreen has written a powerful book that is central to any understanding of the differences and strains over economic issues between Europe and the United States. He examines the fit between social and political institutions and technology and innovation, and judiciously avoids both the depths of pessimism and the optimistic fantasies about Europe that are at the center of other and more facile analyses."—Harold James, Princeton University, author of A History of International Monetary Cooperation since 1945

"The European Economy Since 1945 features a unique blend of modern economics, good history, and a deep understanding of the role of institutions in shaping economic success. Eichengreen's book is about the future of Europe. In the late 1970s, Japan was the model, and the United States looked doomed. Will we be saying the same thing in twenty years about the predictions of European doom and gloom so common today? To avoid that mistake we need to understand where Europe is coming from, and to think hard about the factors that will determine economic success in coming decades. This book is where we should start from."—Francesco Giavazzi, Bocconi University, Milan, and visiting professor, Massachusetts Institute of Technology