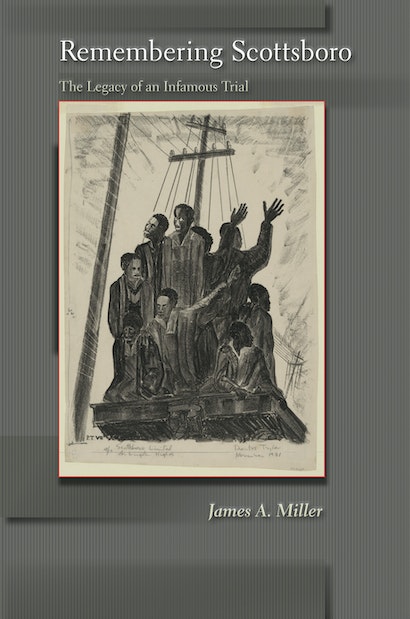 In 1931, nine black youths were charged with raping two white women in Scottsboro, Alabama. Despite meager and contradictory evidence, all nine were found guilty and eight of the defendants were sentenced to death—making Scottsboro one of the worst travesties of justice to take place in the post-Reconstruction South. Remembering Scottsboro explores how this case has embedded itself into the fabric of American memory and become a lens for perceptions of race, class, sexual politics, and justice. James Miller draws upon the archives of the Communist International and NAACP, contemporary journalistic accounts, as well as poetry, drama, fiction, and film, to document the impact of Scottsboro on American culture.

The book reveals how the Communist Party, NAACP, and media shaped early images of Scottsboro; looks at how the case influenced authors including Langston Hughes, Richard Wright, and Harper Lee; shows how politicians and Hollywood filmmakers invoked the case in the ensuing decades; and examines the defiant, sensitive, and savvy correspondence of Haywood Patterson—one of the accused, who fled the Alabama justice system. Miller considers how Scottsboro persists as a point of reference in contemporary American life and suggests that the Civil Rights movement begins much earlier than the Montgomery Bus Boycott of 1955.

James A. Miller was professor of English and American studies and chair of the American Studies Department at George Washington University.

"A well-written, carefully constructed narrative that makes effective use of photos and cartoons."—P.J. Galie, Choice

"Miller's book uses an exceptional range of primary source materials . . . both to burn away the accreted mythification of Scottsboro and to produce a Rashomon-like rendering of the event as a enduring template of American racism, radical politics and cultural production."—Bill V. Mullen, Against the Current

"Remembering Scottsboro offers details not found in earlier publications, and greatly contributes to an understanding of the Scottsboro case and historical memory. Miller's study is a captivating, informative, and fitting analysis for a court case that attracted the nation's attention for decades."—Janira Teague, Journal of African American History

"[A]bly documented and engagingly written. . . . The strengths of Remembering Scottsboro are many. Miller writes a translucent, jargon-free prose, and his generous textual quotations enable nonspecialist readers to follow the thread of his argument. . . . Remembering Scottsboro is a valuable contribution to the growing body of scholarship that documents repression, resistance, and representation in and of the Jim Crow South. This important book should be widely read and taught."—Barbara Foley, African American Review

"In the remarkable proliferation of books coming out of the 'memory mill' in American studies and history for the past two decades, this is one of the best because it is not only about memory and 'mis-remembering'. . . it is about indirect parallels as well as patterns of influence, explicit and implicit."—Michael Kammen, European Legacy

"Readers will find riveting new perspectives on one of the most important cases in our national history. I have read many books on Scottsboro, but until I read this one, I had no idea of the many and varied representations of this case."—Mary Helen Washington, University of Maryland

"With vigor, thoroughness, and creativity, Miller traces the treatment of Scottsboro in a variety of media—journalism, poetry, fiction, drama, and film. He demonstrates how each medium and moment constructed its own 'Scottsboro' and developed its own lexicon for a case that commanded the public's attention for roughly half a century."—Deborah E. McDowell, author of Leaving Pipe Shop: Memories of Kin