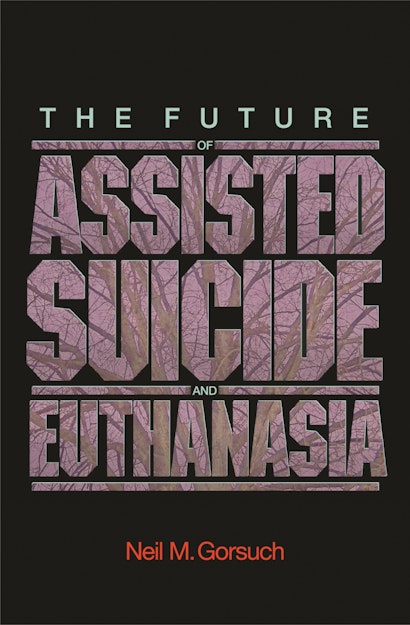 The Future of Assisted Suicide and Euthanasia provides the most thorough overview of the ethical and legal issues raised by assisted suicide and euthanasia — as well as the most comprehensive argument against their legalization — ever published.


In clear terms accessible to the general reader, Neil Gorsuch thoroughly assesses the strengths and weaknesses of leading contemporary ethical arguments for assisted suicide and euthanasia. He explores evidence and case histories from the Netherlands and Oregon, where the practices have been legalized. He analyzes libertarian and autonomy-based arguments for legalization as well as the impact of key U.S. Supreme Court decisions on the debate. And he examines the history and evolution of laws and attitudes regarding assisted suicide and euthanasia in American society.


After assessing the strengths and weaknesses of arguments for assisted suicide and euthanasia, Gorsuch builds a nuanced, novel, and powerful moral and legal argument against legalization, one based on a principle that, surprisingly, has largely been overlooked in the debate — the idea that human life is intrinsically valuable and that intentional killing is always wrong. At the same time, the argument Gorsuch develops leaves wide latitude for individual patient autonomy and the refusal of unwanted medical treatment and life-sustaining care, permitting intervention only in cases where an intention to kill is present.


Those on both sides of the assisted suicide question will find Gorsuch’s analysis to be a thoughtful and stimulating contribution to the debate about one of the most controversial public policy issues of our day.

Neil M. Gorsuch is an associate justice of the U.S. Supreme Court.

"I believe that anyone who is concerned about the issue must engage with [Gorsuch's] arguments."—Raymond Tallis, Times Literary Supplement

"Gorsuch lucidly lays out the key ethical and philosophical arguments on both sides. . . . [This] is the most important book published so far in consideration of ethical and legal issues."—Kevin Yuill, Spiked Review of Books

"The author provides a thorough overview of the ethical and legal issues raised by assisted suicide and euthanasia, as well as the most comprehensive argument against their legalization."—Issues in Law & Medicine

"Gorsuch reviews the case law and the range of ethical and legal issues surrounding assisted suicide and offers a strong argument against legalization of these practices, even as he considers both positions in the debate."—Law & Social Inquiry

"For those who need insight into the part played by legislators and courts of justice in recent euthanasia discussions, Neil M. Gorsuch's book . . . is an excellent source. . . . [C]omprehensive and well argued."—Theo A. Boer, Journal of Religious Ethics

"Neil M. Gorsuch builds a powerful moral and legal argument against [assisted suicide's] legalization, one based on a principle that has largely been overlooked in the debate—the idea that human life is intrinsically valuable and that intentional killing is wrong."—New Oxford Review

"Goruch's book is an exceptional contribution to a debate that is both significant and topical. Every reader, whether or not ultimately persuaded by his arguments, will emerge better equipped to tackle the profound questions surrounding euthanasia and assisted suicide. it is essential reading for advocates and opponents alike."—Wendy E. Hiscox, Studies in Christian Ethics

"Justice Gorsuch’s first published monograph is a philosophically informed argument for the inherent dignity of human life. His prose is clear, his insight powerful. They demonstrate a prescient understanding of the direction the law may go in the end-of-life debate."—Christopher J. Wolfe, National Catholic Bioethics Quarterly

"A thoughtful, sober, and thorough work, which should be read by supporters, opponents, and the undecided alike."—Eugene Volokh, UCLA School of Law

"This may well become one of the most important books in the field. It is timely, thorough, well reasoned, well structured, and well written. Its reply to the arguments for legalizing physician-assisted suicide is measured, fair, and persuasive."—John Keown, Georgetown University, author of Euthanasia, Ethics, and Public Policy

"In a world where there are now many books and articles on assisted suicide and euthanasia, Neil Gorsuch's book is a timely and significant contribution. While the primary focus is on the law, with a systematic survey of pertinent legal and court decisions, the book manages as well to nicely set the problem within a broader international context. His insights and arguments are penetrating and pertinent, and anyone who reads this book will come away with an expanded horizon of understanding."—Daniel Callahan, The Hastings Center, author of The Research Imperative: What Price Better Health?

"Gorsuch's book is an exceptionally fine contribution to one of the most timely debates in ethics and public policy: the question of assisted suicide and voluntary euthanasia. It sorts out the arguments for and against relaxing legal prohibitions on choices of these kinds, and does so in tandem with an account—close, accurate, straightforward, and uncluttered—of the developing law in statutes and cases. It could quickly become the leading book in the field."—Robert P. George, Princeton University, and the President's Commission on Bioethics