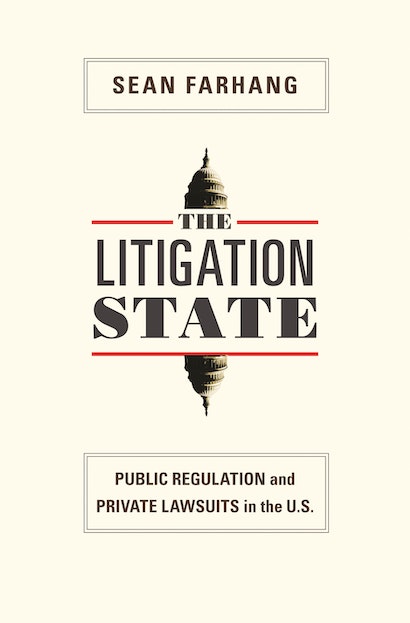 Of the 1.65 million lawsuits enforcing federal laws over the past decade, 3 percent were prosecuted by the federal government, while 97 percent were litigated by private parties. When and why did private plaintiff-driven litigation become a dominant model for enforcing federal regulation? The Litigation State shows how government legislation created the nation’s reliance upon private litigation, and investigates why Congress would choose to mobilize, through statutory design, private lawsuits to implement federal statutes. Sean Farhang argues that Congress deliberately cultivates such private lawsuits partly as a means of enforcing its will over the resistance of opposing presidents.


Farhang reveals that private lawsuits, functioning as an enforcement resource, are a profoundly important component of American state capacity. He demonstrates how the distinctive institutional structure of the American state — particularly conflict between Congress and the president over control of the bureaucracy — encourages Congress to incentivize private lawsuits. Congress thereby achieves regulatory aims through a decentralized army of private lawyers, rather than by well-staffed bureaucracies under the president’s influence. The historical development of ideological polarization between Congress and the president since the late 1960s has been a powerful cause of the explosion of private lawsuits enforcing federal law over the same period.

Sean Farhang is assistant professor in the Goldman School of Public Policy at the University of California, Berkeley.

"Farhang is at the forefront of a new generation of scholars who have begun to broaden the parameters of the American state and its reach into society. Drawing upon an impressive range of methods, sources, and theory, Farhang shows us how Congress and the administration extended the reach of regulation by inducing private litigants and the legal profession to cocreate a vast regulatory regime. A shrewd reading of the new mode of state-building."—Dan Carpenter, Harvard University

"This book is a major advance in the understanding of American government. Farhang demonstrates that America's distinctive reliance on adversarial legalism to enforce civil rights does not reflect a power grab by lawyers and judges. Instead, it stems from deliberate Congressional choices, in the face of political polarization, to use private litigation to protect individual rights."—Robert A. Kagan, University of California, Berkeley

"Private enforcement of statutory provisions is an enormously significant aspect of our political system and economy, yet researchers have largely ignored this issue. This seminal and important book exhaustively analyzes the theory behind private enforcement and persuasively sets out the history of its intentional creation as a tool of regulation."—Frank Cross, University of Texas, Austin

"This is an expertly executed, rigorous, and innovative book about American political development. With a commanding, multidisciplinary approach, Farhang develops the concepts of state fragmentation and capacity, and brings a sophisticated understanding of ideology to the discussion."—John Skrentny, University of California, San Diego

"This is an exceptionally well-crafted, clearly argued, and illuminating book on the growing use of private litigation as a regulatory tool. Farhang's crisply framed analysis crosses subfields of American politics and shows how Democrats and Republicans collaborated to turn U.S. policy toward a reliance on litigation."—Charles Epp, University of Kansas