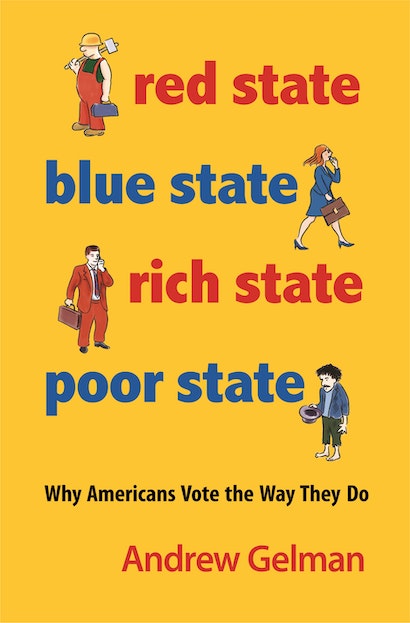 On the night of the 2000 presidential election, Americans watched on television as polling results divided the nation’s map into red and blue states. Since then the color divide has become symbolic of a culture war that thrives on stereotypes — pickup-driving red-state Republicans who vote based on God, guns, and gays; and elitist blue-state Democrats woefully out of touch with heartland values. With wit and prodigious number crunching, Andrew Gelman debunks these and other political myths.

Andrew Gelman is professor of statistics and political science at Columbia University. His books include Teaching Statistics: A Bag of Tricks. He received the Presidents' Award in 2003, awarded each year to the best statistician under forty.

"Gelman and a group of fellow political scientists crunch numbers and draw graphs, arriving at a picture that refutes the [idea] . . . of poor red-staters voting Republican against their economic interests. Instead, Gelman persuasively argues, the poor in both red states and blue still mostly vote Democratic, and the rich, nationally speaking, overwhelmingly vote Republican."—Leo Carey, New Yorker

"This is the Freakonomics-style analysis that every candidate and campaign consultant should read."—Robert Sommer, New York Observer

"Gelman works his way, state by state, to help us better understand the relationship of class, culture, and voting. The book is a terrific read and offers much insight into the changing electoral landscape."—Sudhir Venkatesh, Freakonomics blog

"[T]his book already analyzes far more data than do most. On that note, it is worth lauding another of this book's strengths: its rich graphical presentation of evidence. Its numerous figures often allow the reader to see the data and to draw one's own inferences, and they render the book accessible to those with little statistical training."—Gabriel S. Lenz, Public Opinion Quarterly

"Although the book is stronger on description than interpretation, it raises important questions and presents its findings in a clear and readable fashion that encourages replication, critique, and elaboration. . . . Red State, Blue State shows that much can be learned from applying serious quantitative analysis to popular ideas. It debunks popular misconceptions, but also reveals the limitations of most academic analyses."—David L. Weakliem, International Review of Modern Sociology