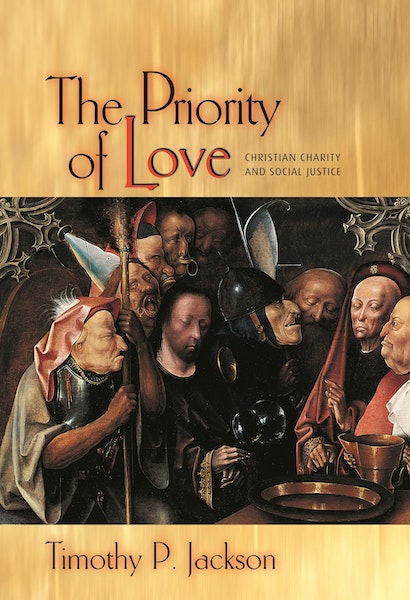 This book explores the relation between agape (or Christian charity) and social justice. Timothy Jackson defines agape as the central virtue in Christian ethical thought and action and applies his insights to three concrete issues: political violence, forgiveness, and abortion. Taking his primary cue from the New Testament while drawing extensively from contemporary theology and philosophy, Jackson identifies three features of Christian charity: unconditional commitment to the good of others, equal regard for others’ well-being, and passionate service open to self-sacrifice for the sake of others.

Charity, prescribed by Jesus for his disciples and named by Saint Paul as the “greatest” theological virtue, is contrasted with various accounts of justice. Jackson argues that agape is not trumped by justice or other goods. Rather, agape precedes justice: without the work of love, society would not produce persons capable of merit, demerit, and contract, the elements of most modern conceptions of justice. Jackson then considers the implications of his ideas for several questions: the nature of God, the relation between Christian love and political violence, the place of forgiveness, and the morality of abortion. Arguing that agapic love is to be construed as a gift of grace as well as a divine commandment, Jackson concludes that love is the “eternal life” that makes temporal existence possible and thus the “first” Christian virtue. Though foremost a contribution to Christian ethics, Jackson’s arguments and the issues he takes up will find a broader readership.

Timothy P. Jackson is Associate Professor of Christian Ethics at The Candler School of Theology at Emory University. He is the author of Love Disconsoled: Meditations on Christian Charity.

"Jackson is a first-rate scholar who writes clearly and gracefully. Any summary of his argument in Priority of Love can hardly do justice to the facility with which he handles the controversies on each of his major themes and to his provocative sub-themes."—Michael J. Kerlin, America

"This book is a passionate, learned, and illuminating inquiry into what Christian love means in a world that largely rejects it. It is reminiscent of the best work of the late Paul Ramsey—in its commitment to the priority of charity in ethics, in its sensitive handling of the relationship between love and justice, in the seriousness with which it discusses issues like warfare and abortion, in its intellectual courage, and in the author's determination to think for himself. Reading Jackson always teaches me something new about the tradition he represents. As readers of his first book, Love Disconsoled, will know, the steadiness of his basic convictions does not prevent him from surprising us with novel reasoning and bold stands. Jackson must now be counted among the premier scholars of Christian ethics in his generation."—Jeffrey Stout, Princeton University