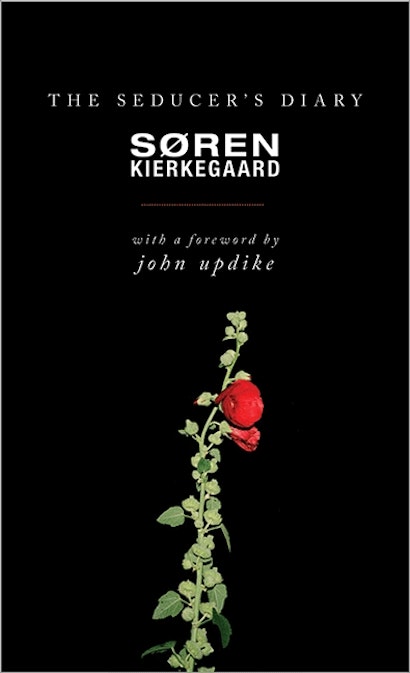 “In the vast literature of love, The Seducer’s Diary is an intricate curiosity — a feverishly intellectual attempt to reconstruct an erotic failure as a pedagogic success, a wound masked as a boast,” observes John Updike in his foreword to Søren Kierkegaard’s narrative. This work, a chapter from Kierkegaard’s first major volume, Either/Or, springs from his relationship with his fiancée, Regine Olsen. Kierkegaard fell in love with the young woman, ten years his junior, proposed to her, but then broke off their engagement a year later. This event affected Kierkegaard profoundly. Olsen became a muse for him, and a flood of volumes resulted. His attempt to set right, in writing, what he feels was a mistake in his relationship with Olsen taught him the secret of “indirect communication.” The Seducer’s Diary, then, becomes Kierkegaard’s attempt to portray himself as a scoundrel and thus make their break easier for her.


Matters of marriage, the ethical versus the aesthetic, dread, and, increasingly, the severities of Christianity are pondered by Kierkegaard in this intense work.

The text is from Howard V. Hong's and Edna H. Hong's standard English translation of The Writings of Kierkegaard. The foreword by John Updike was specifically commissioned for this volume.