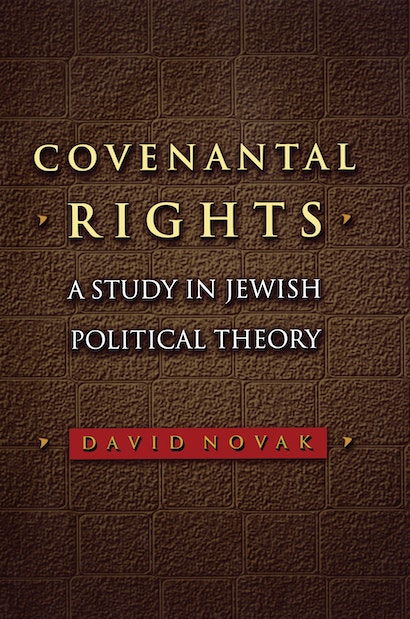 Covenantal Rights is a groundbreaking work of political theory: a comprehensive, philosophically sophisticated attempt to bring insights from the Jewish political tradition into current political and legal debates about rights and to bring rights discourse more fully into Jewish thought. David Novak pursues these aims by presenting a theory of rights founded on the covenant between God and the Jewish people as that covenant is constituted by Scripture and the rabbinic tradition. In doing so, he presents a powerful challenge to prevailing liberal and conservative positions on rights and duties and opens a new chapter in contemporary Jewish political thinking.


For Novak, “covenantal rights” are rooted in God’s primary rights as creator of the universe and as the elector of a particular community whose members relate to this God as their sovereign. The subsequent rights of individuals and communities flow from God’s covenantal promises, which function as irrevocable entitlements. This presents a sharp contrast to the liberal tradition, in which rights flow above all from individuals. It also challenges the conservative idea that duties can take precedence over rights, since Novak argues that there are no covenantal duties that are not backed by correlative rights. Novak explains carefully and clearly how this theory of covenantal rights fits into Jewish tradition and applies to the relationships among God, the covenanted community, and individuals. This work is a profound and provocative contribution to contemporary religious and political theory.

David Novak holds the J. Richard and Dorothy Shiff Chair of Jewish Studies at the University of Toronto. His previous books include Natural Law in Judaism, The Election of Israel, and Jewish Social Ethics.

"This will be a reference point for all those seeking a profound Jewish consideration of issues in political theory for years to come. It will be read with profit not only by those interested in the Jewish political tradition, but also by moral philosophers, students of Jewish theology, and anyone concerned with the contemporary debate on religion and public affairs."—Alan Mittleman, Muhlenberg College

"In preparing this book, Novak has had the insight, grace, and fortune to construct one of those concepts that reorganize and recenter academic debates in a given field. Here it is the concept of 'covenantal rights,' which he offers as an alternative to both liberal natural rights theory and neo-conservative communitarianism The book reflects the depth and breadth of Novak's research and thinking both inside and outside the Jewish tradition."—Peter W. Ochs, University of Virginia