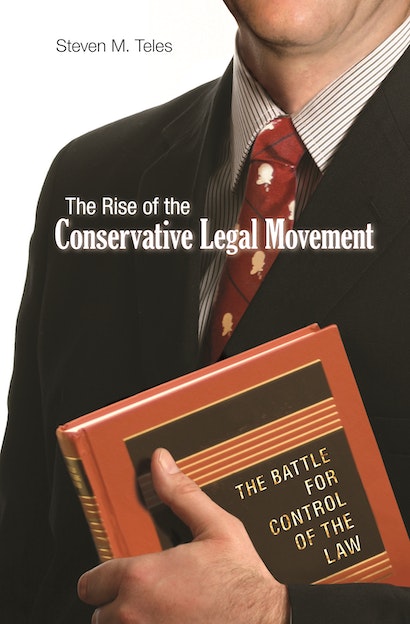 Starting in the 1970s, conservatives learned that electoral victory did not easily convert into a reversal of important liberal accomplishments, especially in the law. As a result, conservatives’ mobilizing efforts increasingly turned to law schools, professional networks, public interest groups, and the judiciary — areas traditionally controlled by liberals. Drawing from internal documents, as well as interviews with key conservative figures, The Rise of the Conservative Legal Movement examines this sometimes fitful, and still only partially successful, conservative challenge to liberal domination of the law and American legal institutions.


Unlike accounts that depict the conservatives as fiendishly skilled, The Rise of the Conservative Legal Movement reveals the formidable challenges that conservatives faced in competing with legal liberalism. Steven Teles explores how conservative mobilization was shaped by the legal profession, the legacy of the liberal movement, and the difficulties in matching strategic opportunities with effective organizational responses. He explains how foundations and groups promoting conservative ideas built a network designed to dislodge legal liberalism from American elite institutions. And he portrays the reality, not of a grand strategy masterfully pursued, but of individuals and political entrepreneurs learning from trial and error.


Using previously unavailable materials from the Olin Foundation, Federalist Society, Center for Individual Rights, Institute for Justice, and Law and Economics Center, The Rise of the Conservative Legal Movement provides an unprecedented look at the inner life of the conservative movement. Lawyers, historians, sociologists, political scientists, and activists seeking to learn from the conservative experience in the law will find it compelling reading.

Steven M. Teles is associate professor of political science at Johns Hopkins University and a fellow at the New America Foundation.

"In a terrific new book, The Rise of the Conservative Legal Movement, professor Steven M. Teles charts the success of the conservative legal establishment over the past several decades. Digging past liberal clichés about an all-powerful Federalist Society tree fort, Teles charts a complicated countermobilization that took place in legal academia and conservative public-interest law, against law schools and a government in thrall with liberal ideas. He chronicles the rise of a multifaceted organizational and institutional structure that has become the only game in town."—Dahilia Lithwick, Slate

"Teles's book is . . . a piece of first-rate scholarship based on archival research and many interviews. . . . [T]he Rise of the Conservative Legal Movement is a fine piece of historical scholarship and an important contribution to understanding strategies for combating entrenched political and intellectual elites."—Charlotte Allen, The Weekly Standard

"Steven Teles . . . examines a complex phenomenon still playing itself out in The Rise of the Conservative Legal Movement. He does so thoughtfully and provocatively, and with access to key insiders and archival material. His book should be interesting to readers across the political spectrum. . . . Teles's book provides a panoramic, nonpartisan portrait of the sober and serious side of the conservative legal movement. In doing so, it can hopefully lead toward a respectful, constructive dialogue about the role of law in society."—Ronald Goldfarb, Washington Lawyer

"I am recommending Teles's book to all my liberal and progressive colleagues. . . . Perhaps if liberals and progressives pay enough attention to the lessons about problem-solving and adaptation taught in this valuable book, Prof. Teles will have an opportunity to write a sequel, The Renaissance of the Liberal Legal Network."—Michael Avery, Suffolk University Law Review

"Lawyers fill an important role in American democracy, as the conduit for transmitting social mores from the nation's elite to the people, and vice versa. How they do this is something sociologists have spent relatively little time researching, but Steven M. Teles has taken a step to remedy this by producing an engaging, insightful, and remarkably objective analysis of how the climate of legal ideas actually changes. His book is neither history nor polemic, but a scholarly study of how an ideological minority organized despite overwhelming hostility, knot an effective (if still minority) force against the prevailing orthodoxy. . . . [T]eles's book is an important and persuasive account of the growth and success of a corps of intellectuals who are challenging the hegemony of big government in American society."—Timothy Sandefur, California Lawyer

"[T]his new book by Steven Teles . . . will appeal mainly if not only to legal and politics specialists, and those interested in the USA at that. However, his survey of the ways in which conservative law grew from the 1960s to the turn of the twenty-first century reveals even more of interest to anyone trying to understand how conservative values and beliefs . . . were and have been internalized in US law schools and the education there, as well as in legal practice and the federal bench."—Stuart Hannabuss, Library Review

"No published study about the conservative legal movement of which I am aware can compete with the information, detail, perspectives, and stories that Teles has packed into his book."—Roy B. Flemming, Law and Politics Book Review

"Well written and well researched. . . . Activists on both the Left and the Right can learn about the tactics of intellectual insurgency and networking. Political scientists can benefit from Teles's explanation of how liberalism became entrenched in legal institutions just as conservatives were starting to dominate electoral politics. And grant-makers can learn the importance of adopting a long time-horizon when engaged in a battle of ideas."—R. Shep Melnick, Claremont Review of Books

"Teles provides a thorough analytical chronology of the emergence of intellectuals, networks, political entrepreneurs, and patrons as a new level of political competition in the legal arena, which he contends has made elections themselves less significant. . . . This is an exceptionally valuable resource for understanding recent changes, both liberal and conservative, in the legal and political spheres."—R. Heineman, Choice

"This fine book will surely become the leading authority on the efforts of modern conservatives to shape law. It should be of interest to a wide range of scholars and lawyers."—James W. Ely, Jr., Law and History Review

"This excellent book deserves to be widely read and discussed. . . . It can be read with profit by historians of conservatism, by political scientists interested in American political development, and by scholars interested in the complexities of large-scale change in legal doctrine and structure and its relation to conventional politics."—Richard Adelstein, Constitutional Political Economy

"Teles draws on extraordinarily rich data to show how a conservative legal movement emerged and altered the ideological landscape in the legal profession and in the judicial branch of government. . . . The author artfully examines the interplay of structure and action, as he describes both the successes and failures of the movement's architects."—Rory McVeigh, Contemporary Sociology

"Steven M. Teles has written a remarkable book that reinforces the truth that ideas have consequences. . . . Teles offers a fascinating account of the myriad moving parts that did and must work together to effect large-scale political change."—Bradley C. S. Watson, Intercollegiate Review

"[A] remarkable book. . . . Teles adopts an approach that is both highly effective and radically divergent from the typical foci and methods of contemporary scholarship on American politics."—Paul Pierson, Perspectives on Politics

"Steven M. Teles has written a fascinating book on how conservative ideas gained influence over contemporary law and has added an essential chapter to our historical accounts of modern conservatism, which until now have focused on electoral politics."—Linda Przybyszewski, Journal of American History

"[Steven M. Teles'] book provide[s] . . . insights into the causes and contours of the American conservative legal movement and provide[s] a much-welcomed alternative perspective to the regime politics literature by spotlighting the supply side of legal and constitutional change."—Amanda Hollis-Brusky, Law & Social Inquiry

"The Rise of the Conservative Legal Movement provides an essential road map to the organizational mobilization of conservatives over the past quarter century."—Al Gore, corecipient of the 2007 Nobel Peace Prize

"Steven Teles's deep, meticulous study of the successes and failures of the conservative legal reform movement illuminates the politics of law like nothing else in the literature. Combining original reporting, political theory, and institutional analysis in just the right proportions, his bold and deliberate investigation leads to a bracing conclusion: idealism, risk taking, patience, and devotion to the intrinsic merits of ideas are not secondary, but essential to the discovery of successful political strategies."—Christopher DeMuth, president of the American Enterprise Institute for Public Policy Research

"In this deeply informative and engagingly written book, Teles credits, as many academics refuse to do, the possibility that the success of the conservative legal movement is to be explained in part by the intellectual force of conservative arguments. His fair-mindedness is praiseworthy not only for its own sake, but also for enabling him to produce a more accurate and refined account of the remarkable phenomenon he seeks to understand."—Robert P. George, Princeton University

"A timely and important book. Drawing on inside accounts from key players, Teles tells the remarkable story of how conservatives overthrew liberal legal assumptions; more importantly, he shows how successful ideas depend on building organizations, institutions, and networks to propagate and defend them."—Jack M. Balkin, Yale Law School

"The Rise of the Conservative Legal Movement is a terrific, pathbreaking book, and Teles tells the story with verve, clarity, and elegance. Through the quality of its argument and evidence, this book will become the standard authority on the conservative movement in law."—Charles Epp, author of The Rights Revolution: Lawyers, Activists, and Supreme Courts in Comparative Perspective

"The Rise of the Conservative Legal Movement is the rare ambitious book that succeeds in presenting both the theory and the details. It offers compelling arguments about entrenchment and countermobilization, organizational strategies and institutional maintenance. It provides vivid pictures of particular organizations, entrepreneurs, and controversies. And it tells instructive stories about failures as well as successes. Useful and important, broad and convincing, this is a great book."—R. Shep Melnick, Boston College