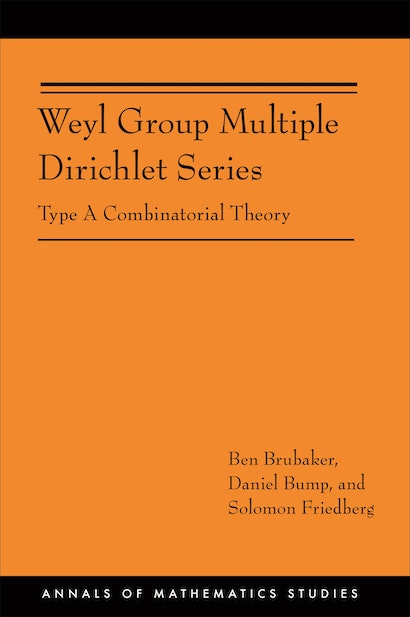 Weyl group multiple Dirichlet series are generalizations of the Riemann zeta function. Like the Riemann zeta function, they are Dirichlet series with analytic continuation and functional equations, having applications to analytic number theory. By contrast, these Weyl group multiple Dirichlet series may be functions of several complex variables and their groups of functional equations may be arbitrary finite Weyl groups. Furthermore, their coefficients are multiplicative up to roots of unity, generalizing the notion of Euler products. This book proves foundational results about these series and develops their combinatorics.


These interesting functions may be described as Whittaker coefficients of Eisenstein series on metaplectic groups, but this characterization doesn’t readily lead to an explicit description of the coefficients. The coefficients may be expressed as sums over Kashiwara crystals, which are combinatorial analogs of characters of irreducible representations of Lie groups. For Cartan Type A, there are two distinguished descriptions, and if these are known to be equal, the analytic properties of the Dirichlet series follow. Proving the equality of the two combinatorial definitions of the Weyl group multiple Dirichlet series requires the comparison of two sums of products of Gauss sums over lattice points in polytopes. Through a series of surprising combinatorial reductions, this is accomplished.


The book includes expository material about crystals, deformations of the Weyl character formula, and the Yang-Baxter equation.