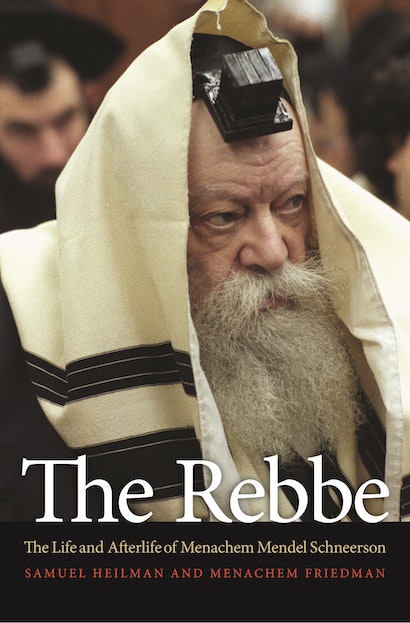 From the 1950s until his death in 1994, Menachem Mendel Schneerson—revered by his followers worldwide simply as the Rebbe—built the Lubavitcher movement from a relatively small sect within Hasidic Judaism into the powerful force in Jewish life that it is today. Swept away by his expectation that the Messiah was coming, he came to believe that he could deny death and change history.

Samuel Heilman and Menachem Friedman paint an unforgettable portrait of Schneerson, showing how he reinvented himself from an aspiring French-trained electrical engineer into a charismatic leader who believed that he and his Lubavitcher Hasidic emissaries could transform the world. They reveal how his messianic convictions ripened and how he attempted to bring the ancient idea of a day of redemption onto the modern world’s agenda. Heilman and Friedman also trace what happened after the Rebbe’s death, by which time many of his followers had come to think of him as the Messiah himself.

The Rebbe tracks Schneerson’s remarkable life from his birth in Russia, to his student days in Berlin and Paris, to his rise to global renown in New York, where he developed and preached his powerful spiritual message from the group’s gothic mansion in Crown Heights, Brooklyn. This compelling book demonstrates how Schneerson’s embrace of traditionalism and American-style modernity made him uniquely suited to his messianic mission.

Samuel Heilman is Distinguished Professor of Sociology at Queens College and holds the Harold Proshansky Chair in Jewish Studies at the Graduate Center of the City University of New York. Menachem Friedman is professor emeritus of sociology at Bar-Ilan University in Israel.

"How do you write a biography of the Messiah? That is the question that Samuel Heilman and Menachem Friedman, two leading Jewish social scientists, have had to tackle in their groundbreaking study of Menachem Mendel Schneerson."—Times Literary Supplement

"[A]n outstanding biography of Menachem Mendel Schneerson, the seventh Lubavitcher rebbe. . . . This well-written presentation, based on exhaustive scholarship, will stand as the definitive statement about the life and times of a highly influential religious leader."—Publishers Weekly

"[A]n important biography. . . . This is as full and reliable an account of the life of this towering spiritual leader as we are likely to get."—Saul Rosenberg, New York Sun

"Lively and provocative. . . . [An] eye-opening account of the Rebbe's 'life and afterlife.' . . . [T]he best analytical study of the two major themes that it addresses: A critical and often boldly psychological biography of Schneerson is prefaced and supplemented by two chapters devoted to a sociological analysis of the beliefs and behaviors of his Hasidim, especially after the death of the man they were—and most still are—convinced was the Messiah."—Allan Nadler, Forward

"This fascinating book by two outstanding scholars of contemporary Jewry is a must-read for those interested in the Lubavitch movement, whether insiders or outsiders. . . . Overall, it examines a mystery that compels the reader's interest."—Jewish Book World

"The Rebbe: The Life and Afterlife of Menachem Mendel Schneerson by Samuel Heilman and Menachem Friedman fills a considerable void in the biography of one of the towering religious figures of the 20th century. . . . I am grateful to the authors for a profoundly human biography that will hopefully spur a whole new literature on the rebbe as man rather than angel and as person rather than saint."—Rabbi Shmuley Boteach, New York Jewish Week

"[T]his book will serve as the most outstanding work in print on the Rebbe's life, his influence and his afterlife."—Aaron Howard, Jewish Herald-Voice

"Sixteen years after the death of Rabbi Menachem Mendel Schneerson, a flurry of new publications indicates not only how enduring the interest is in his life and legacy, but how potent the minefield is surrounding his mythology. . . . The Heilman-Friedman book is generating the most controversy. Written for a lay audience, it frames Schneerson's mission, and that of the Chabad movement he led, as motivated by Messianism, here defined as the attempt to hasten the Messianic era through human actions."—Sue Fishkoff, Jewish Telegraphic Agency

"In this exemplary work, we are treated to a well-written, well-documented history of the rise, life, death, and 'afterlife' of Menachem Mendel Schneerson (1902-94), the seventh-and last larger-than-life-leader (or 'rebbe') of ChaBaD Lubavitcher Hasidism. . . . An outstanding book, strongly recommended for all interested in studying Schneerson and his beliefs."—Anthony J. Elia, Library Journal

"When Samuel Heilman and Menachem Friedman, the two most distinguished sociologists of contemporary Orthodox Judaism set out to write this book, I was green with envy. They would combine their considerable talents and learning to bear on arguably the most fascinating, perhaps even the most successful, late 20th century Jewish religious leader. . . . They have done an admirable job."—Michael Berenbaum, Jewish Journal of Greater Los Angeles

"[T]he extraordinary biography of the Lubavitcher Rebbe executed by Samuel Heilman and Menachem Friedman, two sociologists who have cooperated in an exacting study of one of the most important religious figures of the 20th century. . . . They deploy this approach in a narrative that is extraordinarily smooth in its literary style and transforms what could have been a dry and jargon-ridden sociological foray into a highly readable and occasionally even gripping exploration of the inner workings and theological complications that have animated the Lubavitcher 'empire' in the recent past."—Arnold Ages, Indianapolis Post & Opinion

"[A] superb new biography. . . . Mr. Heilman and Mr. Friedman are the perfect guides to tell this story. Their book is a model of meticulous research and balanced, wise assessments. . . . The authors tell a riveting tale. No better account of this amazing saga of faith, hope, triumph and delusional madness can be imagined. To enjoy this book and learn its profound lessons, you don't have to be Jewish."—Martin Sieff, Washington Times

"Where Heilman and Friedman excel is in separating fact from fiction in the rebbe's life. . . . I am grateful to the authors for a profoundly human biography that will hopefully spur a whole new literature on the rebbe as man rather than angel and as person rather than saint."—Shmuley Boteach, Jerusalem Post

"Illuminating. . . . [A] clearly written and engaging biography. . . . For anyone interested in a sophisticated sociological analysis of how Schneerson was able to become 'The Rebbe' this is a must read."—Nathaniel Deutsch, Haaretz

"Prominent sociologists Heilman and Friedman have written an important book on the Lubavitcher movement, perhaps the most notable sect within Orthodox Judaism. The Rebbe, however, is also a provocative biography of Menachem Mendel Schneerson, the seventh Lubavitcher Rebbe, one of the 20th century's most influential religious leaders. . . . For those unfamiliar with Schneerson's powerful religious message and messianic mission, this is essential reading."—Choice

"There is a great deal that is new in this very readable study and much that should interest students not only of Hasidism but also of charismatic religious groups in general."—Shaul Stampfer, Religious Studies Review

"This book is helpful as an account of the transformation of Chabad from inner-directed to outer-facing, from a lineage that prized lengthy contemplative prayer to one that celebrates bold feats of outreach."—Nehemia Polen, Modern Judaism

"Brilliant, well-researched, and sure to be controversial, The Rebbe is the most important biography of Rabbi Menachem Mendel Schneerson ever to appear. Samuel Heilman and Menachem Friedman, two of the world's foremost sociologists of religion, have produced a landmark study of Chabad, religious messianism, and one of the greatest spiritual figures of the twentieth century."—Jonathan D. Sarna, author of American Judaism: A History

"The Rebbe is a must-read book for anyone concerned with contemporary Jewry as well as for historians of religion. Heilman and Friedman have done a masterful job of combining impeccable scholarship with a great sense of the drama unfolding before them. They dispel myths and restore the Rebbe to the real world of humanity, doing so with sensitivity and warmth."—Arthur Green, author of Tormented Master: The Life and Spiritual Quest of Rabbi Nahman of Bratslav

"This book offers a deeply engaging and well-researched account of the rise to power of one of the most intriguing religious figures of the twentieth century, Jewish or otherwise. There are few subjects in the study of contemporary Judaism of greater interest or relevance than the messianic legacy of the Rebbe. This book will become the definitive study on the subject."—David N. Myers, author of Between Jew and Arab

"This is a timely and important book. Authored by two highly reputable scholars, The Rebbe is likely to appeal to an eager and broad readership, academic and lay. It has few rivals."—Ada Rapoport-Albert, editor of Hasidism Reappraised