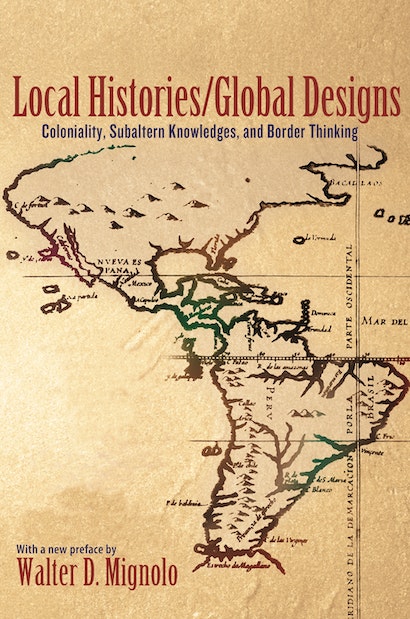 Local Histories/Global Designs is an extended argument about the “coloniality” of power by one of the most innovative Latin American and Latino scholars. In a shrinking world where sharp dichotomies, such as East/West and developing/developed, blur and shift, Walter Mignolo points to the inadequacy of current practices in the social sciences and area studies. He explores the crucial notion of “colonial difference” in the study of the modern colonial world and traces the emergence of an epistemic shift, which he calls “border thinking.” Further, he expands the horizons of those debates already under way in postcolonial studies of Asia and Africa by dwelling in the genealogy of thoughts of South/Central America, the Caribbean, and Latino/as in the United States. His concept of “border gnosis,” or sensing and knowing by dwelling in imperial/colonial borderlands, counters the tendency of occidentalist perspectives to manage, and thus limit, understanding.


In a new preface that discusses Local Histories/Global Designs as a dialogue with Hegel’s Philosophy of History, Mignolo connects his argument with the unfolding of history in the first decade of the twenty-first century.

Walter D. Mignolo is the William H. Wannamaker Distinguished Professor and director of the Center for Global Studies and the Humanities at Duke University. This book is the third of a trilogy that includes The Darker Side of the Renaissance: Literacy, Territoriality, and Colonization and The Darker Side of Western Modernity: Global Futures, Decolonial Options. He is also the author of The Idea of Latin America.

"Postmodernism would remain Eurocentric without a counteracting postcoloniality—without the subaltern rationality that Mignolo sees emerging at the border of modernity/coloniality."—Barry Allen, Common Knowledge

"Walter Mignolo, one of America's most eminent postcolonialists, presents a challenging new paradigm for understanding the realities of a planetary 'coloniality of power,' and the limits of area studies in the United States. Local History/Global Designs is one of the most important books in the historical humanities to have emerged since the end of the Cold War University. This is vintage Mignolo: packed with insights, breadth, and intellectual zeal."—José David Saldívar, University of California, Berkeley