A new approach to understanding Jewish thought since the eighteenth century 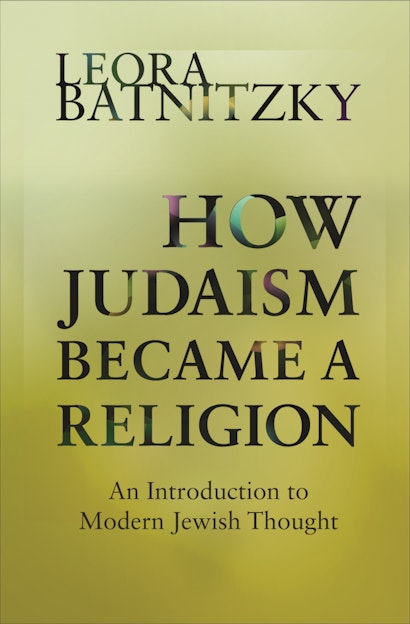 Is Judaism a religion, a culture, a nationality—or a mixture of all of these? In How Judaism Became a Religion, Leora Batnitzky boldly argues that this question more than any other has driven modern Jewish thought since the eighteenth century. This wide-ranging and lucid introduction tells the story of how Judaism came to be defined as a religion in the modern period—and why Jewish thinkers have fought as well as championed this idea.

Ever since the Enlightenment, Jewish thinkers have debated whether and how Judaism—largely a religion of practice and public adherence to law—can fit into a modern, Protestant conception of religion as an individual and private matter of belief or faith. Batnitzky makes the novel argument that it is this clash between the modern category of religion and Judaism that is responsible for much of the creative tension in modern Jewish thought. Tracing how the idea of Jewish religion has been defended and resisted from the eighteenth century to today, the book discusses many of the major Jewish thinkers of the past three centuries, including Moses Mendelssohn, Abraham Geiger, Hermann Cohen, Martin Buber, Zvi Yehuda Kook, Theodor Herzl, and Mordecai Kaplan. At the same time, it tells the story of modern orthodoxy, the German-Jewish renaissance, Jewish religion after the Holocaust, the emergence of the Jewish individual, the birth of Jewish nationalism, and Jewish religion in America.

More than an introduction, How Judaism Became a Religion presents a compelling new perspective on the history of modern Jewish thought.

Leora Batnitzky is the Ronald O. Perelman Professor of Jewish studies and professor of religion at Princeton University, where she also directs the Tikvah Project on Jewish Thought. She is the author of Leo Strauss and Emmanuel Levinas: Philosophy and the Politics of Revelation and Idolatry and Representation: The Philosophy of Franz Rosenzweig Reconsidered (Princeton).

"As Batnitzky points out, Judaism doesn't fit any modern mold especially well. Her book adds both shrewdness and humility to the search for modern Jewish identity and the claims often made about the purity of these identities."—Edward Ruehle, Jewish Voice and Herald

"It has been decades since a broad, synthetic volume addressing the major issues and thinkers in modern Jewish thought has been published. How Judaism Became a Religion fills a lacuna in the field, and this book will no doubt serve as the authoritative secondary source on the topic for some time. Leora Batnitzky offers an eminently readable overview of a large number of complicated, even esoteric thinkers in terms that are manageable, indeed inviting, for nonspecialists and lay readers alike. (Helpfully, she also offers such readers a well-chosen list of suggested readings at the end of each chapter.) In doing so, she renders an invaluable service to the field."—Mara Benjamin, H-Net Reviews

"Leora Batnitzky's How Judaism Became a Religion is a bold new interpretation of modern Jewish thought by one of the leading scholars in the field."—Micah Gottlieb, Jewish Review of Books

"Batnitzky devotes her book to differentiating the array of responses to the modern notion of Judaism as a sheer religion. She presents meticulously the disparate positions of figures as varied as Moses Mendelssohn, Abraham Geigel, Hermann Cohen, Franz Rosenzweig, Martin Buber, Abraham Kook and his son, Theodor Herzl, Ahad Ha'am, Emil Fackenheim and Mordecai Kaplan. She also presents the altogether 'premodern' views of Eastern European Jews such as the Hasidim. She shows that even resolute Reform Jews such as Geiger failed to work out a clean separation between politics and religion. With the Holocaust and with the founding of Israel, any divide seemed refuted by history."—Robert A. Segal, Times Higher Education Supplement

"This book is lucidly written and can be read by the scholar and general interested reader alike."—David Tesler, Association of Jewish Libraries Reviews

"In [How Judaism Became a Religion], Batnitzky provides a useful introductory map of this diverse, centuries-long story. In nine brief chapters, she explains the different responses Jews have made to the challenges of modernity and where each choice leads vis-à-vis both the people of Israel and the individual Jew. The simple design of the book provides an overview of the whole complex issue that will help beginners grasp the essential details. Libraries serving Judaica and religion collections will want to purchase this volume."—Choice

"The book uses the combined rubric of religion, nation, and culture as the key to understanding the past two centuries of Jewish thought. This sweeping construct illuminates scholars and their debates, revealing ironies that have heretofore gone largely unnoticed."—Lawrence Grossman, Jewish Ideas Daily

"What historical analysis cannot tell us, however, is whether the truth about the Jews is found in the more or the less traditional versions of Judaism, in the more communal or the more individualistic thinking, or in the religious or in the secular understandings of Jewishness. To answer that question, one must step outside the constraints of historical description and venture into the world of constructive thought. For anyone who wishes to understand the history of the question and the answers that have already been proposed, Leora Batnitzky's stimulating book is an excellent place to start."—Jon D. Levenson, Commonweal

"Leora Batnitzky's How Judaism became a Religion is an enlightening text, orderly, insightful and quite cogent. . . . Batnitzky's main thesis is deceptively simple and is presented with enviable lucidity and transparency."—S. Parvez Manzoor, Muslim World Book Review

"More than an introduction, How Judaism Became a Religion presents a compelling new perspective on the history of modern Jewish thought."—World Book Industry

"The book does a good job in bringing the subject closer to beginners in this field. . . . Future research . . . will take its starting point from this book, and further engagement on the ideas expounded here will certainly sharpen our assessment of each of these thinkers."—Sebastian Musch, Journal of Religion in Europe

"[H]er book is an undoubted success: in a manner both fascinating and potentially controversial, it broadens the scope of what is defined as ‘thought' by including literary and political figures, rabbis, and academic scholars in the conversation."—Hanoch Ben-Pazi, Studies in Contemporary Jewry

"Batnitzky deserves our thanks for undertaking this project—a comprehensive philosophical examination that is guided as well by historical and biographical thinking. A careful reading of How Judaism Became a Religion invites the reader into the world of Jewish thought in the modern world, in which the spirit of creativity and activism are manifestly evident."—Hanoch Ben-Pazi, Studies in Contemporary Jewry

"Modernity and emancipation challenged the religious, political, legal, and cultural wholeness of diasporic Jewry—and seemed to require Jews to choose whether they were members of a religion, or a nation, or a culture, or a civilization. Leora Batnitzky provides a fascinating and illuminating account of the resulting debates and of those who defended the different options. Since the choice is still open, this is a necessary book."—Michael Walzer, Institute for Advanced Study

"Leora Batnitzky's wonderful overview of modern Jewish thought is also strikingly novel. She shows that modern Jewish philosophy and culture are always responses to a single question: Is it desirable—or even possible—to make Judaism the religion it had never been before? This book is an outstanding achievement that will consolidate Batnitzky's reputation as the most incisive and remarkable scholar of modern Jewish thought of our time."—Samuel Moyn, Columbia University

"How Judaism Became a Religion takes a highly original approach to the whole field of modern Jewish thought, presenting it in a new and fascinating light. This book will interest scholars of Judaism and modern religious thought, but it is also an excellent introduction to modern Jewish thought for nonspecialists."—David Novak, University of Toronto