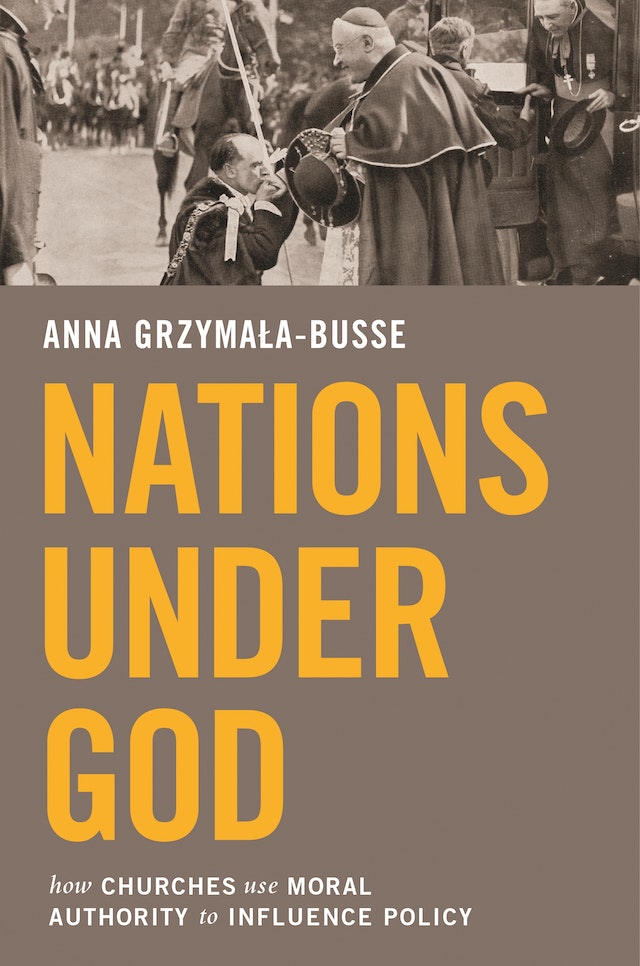 In some religious countries, churches have drafted constitutions, restricted abortion, and controlled education. In others, church influence on public policy is far weaker. Why? Nations under God argues that where religious and national identities have historically fused, churches gain enormous moral authority—and covert institutional access. These powerful churches then shape policy in backrooms and secret meetings instead of through open democratic channels such as political parties or the ballot box.

Through an in-depth historical analysis of six Christian democracies that share similar religious profiles yet differ in their policy outcomes—Ireland and Italy, Poland and Croatia, and the United States and Canada—Anna Grzymała-Busse examines how churches influenced education, abortion, divorce, stem cell research, and same-sex marriage. She argues that churches gain the greatest political advantage when they appear to be above politics. Because institutional access is covert, they retain their moral authority and their reputation as defenders of the national interest and the common good.

Nations under God shows how powerful church officials in Ireland, Canada, and Poland have directly written legislation, vetoed policies, and vetted high-ranking officials. It demonstrates that religiosity itself is not enough for churches to influence politics—churches in Italy and Croatia, for example, are not as influential as we might think—and that churches allied to political parties, such as in the United States, have less influence than their notoriety suggests.

Anna Grzymała-Busse is the Ronald and Eileen Weiser Professor of European and Eurasian Studies at the University of Michigan. Her books include Rebuilding Leviathan: Party Competition and State Exploitation in Post-Communist Democracies.

"A landmark contribution. . . . It blends statistical analysis, qualitative paired comparisons, and formal theory into an argument that is both theoretically nuanced and empirically rich. . . . Nations under God should be kept on a shelf within arm's reach as scholars grapple with these questions."—David T. Buckley, Journal of Church and State

"An original and insightful argument that is essential to understanding the role of religious institutions in politics."—Jonathan Fox, Perspectives on Politics

"In this excellent book, Anna Grzymala-Busse demonstrates that the policy influence of organized religion in democracies depends not on the population's religiosity but on the church's moral authority within the political community, constructed over the course of national history. The originality of the argument, the methodological sophistication of the research, and the extensive historical and comparative evidentiary basis for the book's conclusions all make Nations under God an example of comparative politics at its best. The book is likely to serve as an essential point of reference for future work on the multifaceted and often uneasy relationship between religion and politics in modern democracies."—Giovanni Capoccia, University of Oxford

"In a penetrating analysis of why, when, and where religions have influence on politics, Grzymala-Busse demonstrates the importance of hard-won institutional access by church and other religious actors in those democracies where organized religion holds inordinate sway. Combining wide-ranging history, statistical evidence, and a compelling narrative account, Nations under God transforms forever our understanding of the links between religion and politics."—Margaret Levi, director and professor of political science, Center for Advanced Study in the Behavioral Sciences, Stanford University

"In this magisterial book, Anna Grzymala-Busse explains why churches in some nations wield political influence while churches in others do not. Wise, ambitious, and beautifully crafted, Nations under God is a model of comparative political analysis and is required reading for anyone interested in religion and politics."—James A. Morone, author of The Devils We Know and Hellfire Nation

"Why do Christian churches in some Western societies seem to exert more influence over policy than others? Why, for instance, was the Catholic Church able to get strong antiabortion laws passed in Poland but not in Italy? In this groundbreaking book, Grzymała-Busse proposes a solution to this puzzle."—Philip Gorski, Yale University

"Nations under God is a brilliant book. Grzymała-Busse offers a novel argument about how the Catholic Church and some Protestant denominations successfully influenced policies in democratic regimes. With nuance and elegance, she systematically brings together many case-based, causal-process observations about the relationship of religious and national identities, and places the US experience in a coherent comparative framework."—Andrew C. Gould, University of Notre Dame