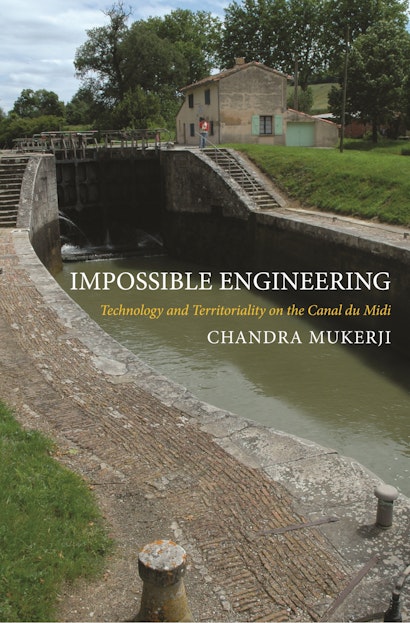 The Canal du Midi, which threads through southwestern France and links the Atlantic to the Mediterranean, was an astonishing feat of seventeenth-century engineering — in fact, it was technically impossible according to the standards of its day. Impossible Engineering takes an insightful and entertaining look at the mystery of its success as well as the canal’s surprising political significance. The waterway was a marvel that connected modern state power to human control of nature just as surely as it linked the ocean to the sea.

The Canal du Midi is typically characterized as the achievement of Pierre-Paul Riquet, a tax farmer and entrepreneur for the canal. Yet Chandra Mukerji argues that it was a product of collective intelligence, depending on peasant women and artisans — unrecognized heirs to Roman traditions of engineering — who came to labor on the waterway in collaboration with military and academic supervisors. Ironically, while Louis XIV and his treasury minister Jean-Baptiste Colbert used propaganda to present France as a new Rome, the Canal du Midi was being constructed with unrecognized classical methods. Still, the result was politically potent. As Mukerji shows, the project took land and power from local nobles, using water itself as a silent agent of the state to disrupt traditions of local life that had served regional elites.

Impossible Engineering opens a surprising window into the world of seventeenth-century France and illuminates a singular work of engineering undertaken to empower the state through technical conquest of nature.

Chandra Mukerji is professor of communication and science studies at the University of California, San Diego. She is the author of Territorial Ambitions and the Gardens of Versailles, A Fragile Power: Scientists and the State (Princeton), and From Graven Images: Patterns of Modern Materialism.

"[T]his is a scintillating blend of cultural, political, and technological history."—Choice

"Mukerji opens a new chapter in the history of the Canal du Midi, aiming to deepen understanding of its design and construction, and also of the related social and gender patterns. Furthermore, this important book also both stresses the concept of distributed knowledge/collective intelligence, and provides a deeper understanding of the impersonal power of structures. Mukeji demonstrates the necessity to pursue studies such as this with an open mind and a critical attitude."—Michel Cotte, Reviews in History

"Impossible Engineering is an insightful meditation on the nature of stewardship, the sociology of knowledge, and the role of accountability in seventeenth-century France, and an extraordinary proof of how rich and challenging the history of material constructions can be."—Sophus A. Reinert, Economic History Review

"Mukerji's analysis of the building of the canal is a tour de force of both historical and sociological research. Based on extensive and imaginative archival research and also on astute observation of the built landscape, it is written in vigorous prose and illustrated by the author's beautiful and informative photographs. It ranks as a significant and highly original contribution to historical and cultural sociology."—William H. Sewell, Jr., American Journal of Sociology

"Impossible Engineering is a masterful work. Mukerji gives us a convincing, original explanation of the baffling technological feat of the construction of the Canal du Midi. She elegantly combines science and technology studies, cultural history, cognitive science, and sociology to show us how cultural memory and collective intelligence contributed to marvels of engineering that no single group of experts could have accomplished. A must-read."—Karin Knorr Cetina, University of Chicago

"Mukerji brings phenomenal scope and originality to the story of the Canal du Midi. Demonstrating how a material object can be the result of collective social intelligence, she provides a model for how to write a new kind of history of science and technology. She brings together material and intellectual history and connects, in an exemplary way, the history of material objects to the development of new patterns of thought and social organization."—Pamela H. Smith, Columbia University

"Impossible Engineering offers a fascinating account of the planning, construction, and interpretation of a major public-works project in seventeenth-century France. Mukerji stresses the participation of many people who have often have been written out of this story, especially the peasant workforce, which included a significant contingent of women. She also raises large general issues about the modes and limitations of human interaction with the natural world. I read this book with great pleasure."—Harriet Ritvo, Massachusetts Institute of Technology

"Drawing on a vast array of original archival data, Impossible Engineering offers an elegant and original analysis of a feat of engineering, the construction of the Canal du Midi. Mukerji weaves various strands of the story with impressive dexterity to produce an account that is undoubtedly that of a scholar at the top of her game. This is a fascinating and theoretically significant study."—Michèle Lamont, Harvard University