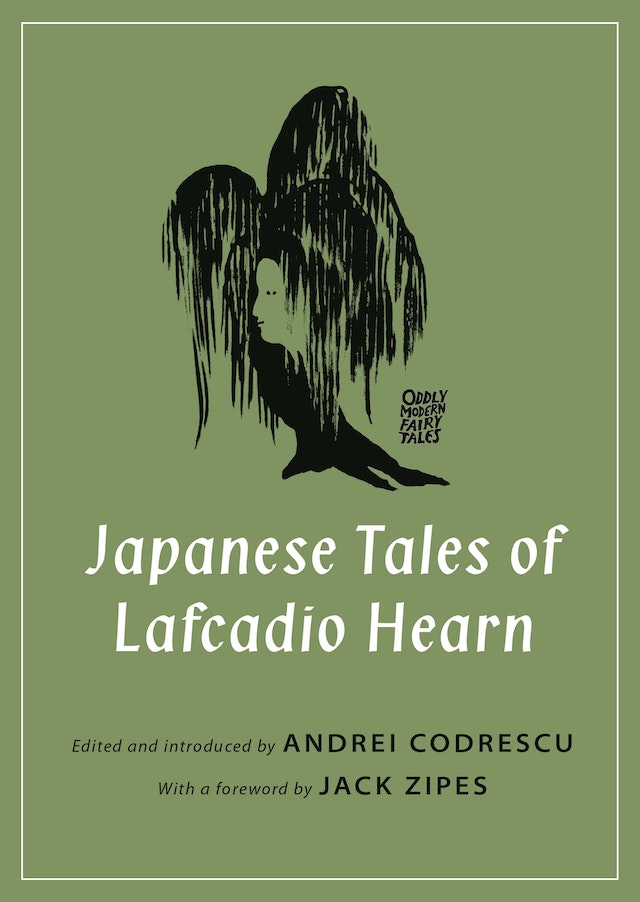 Lafcadio Hearn (1850–1904) was one of the nineteenth century’s best-known writers, his name celebrated alongside those of Mark Twain and Robert Louis Stevenson. Born in Greece and raised in Ireland, Hearn was a true prodigy and world traveler. He worked as a reporter in Cincinnati, New Orleans, and the West Indies before heading to Japan in 1890 on a commission from Harper’s. There, he married a Japanese woman from a samurai family, changed his name to Koizumi Yakumo, and became a Japanese subject. An avid collector of traditional Japanese tales, legends, and myths, Hearn taught literature and wrote his own tales for both Japanese and Western audiences. Japanese Tales of Lafcadio Hearn brings together twenty-eight of Hearn’s strangest and most entertaining stories in one elegant volume.

Hearn’s tales span a variety of genres. Many are fantastical ghost stories, such as “The Corpse-Rider,” in which a man foils the attempts of his former wife’s ghost to haunt him. Some are love stories in which the beloved is not what she appears to be: in “The Story of Aoyagi,” a young samurai narrowly escapes the wrath of his lord for marrying without permission, only to discover that his wife is the spirit of a willow tree. Throughout this collection, Hearn’s reverence for Japan shines through, and his stories provide insights into the country’s artistic and cultural heritage.

With an introduction by Andrei Codrescu discussing Hearn’s life and work, as well as a foreword by Jack Zipes, Japanese Tales of Lafcadio Hearn provides a unique window into one writer’s multicultural literary journey.

Andrei Codrescu is a poet, novelist, essayist, and NPR commentator. His many books include Whatever Gets You through the Night, The Postmodern Dada Guide, and The Poetry Lesson (all Princeton). Twitter @acodrescu. Jack Zipes is the editor of The Original Folk and Fairy Tales of the Brothers Grimm (Princeton) and The Great Fairy Tale Tradition (Norton).

"[A] weird—in a good way—collection of stories, gathered from oral and written sources by Hearn."—Christopher Tayler, Harper's Magazine

"[Lafcadio Hearn] devoted . . . his writing life to gathering Japanese folk tales and translating them into English. This new book contains the best of them."—Susan Balée, The Hudson Review

"There is an excellent introduction by Codrescu . . . fascinating."—Damain Flanagan, Times Literary Supplement

"[Japanese Tales of Lafcadio Hearn] is a uniquely transcultural kind of storytelling—something that feels familiar to Western audiences despite being wrapped in entirely different histories and cultural codes. . . . While the stories in the book are over a hundred years old, they have a lot to offer to twenty-first-century readers."—Reid Bartholomew, World Literature Today

“Lafcadio Hearn’s writing is very important as literature and has long been critically recognized for its presentation of Japanese folklore and culture. With a clear, crisp foreword and an enticing introduction that contextualizes Hearn’s life, this book brings together some of his most significant and enjoyable works in a convenient format for a broad audience.”—Michael Dylan Foster, author of The Book of Yōkai

“The selection of stories in this collection is excellent. Hearn should be read by all lovers of Borges.”—Steve Ridgely, author of Japanese Counterculture

“This book reacquaints contemporary readers with Lafcadio Hearn’s ‘Japanese’ fairy tales. This is a worthwhile endeavor and may help Hearn gain the place in fairy-tale scholarship that he deserves.”—Melek Ortabasi, author of The Undiscovered Country