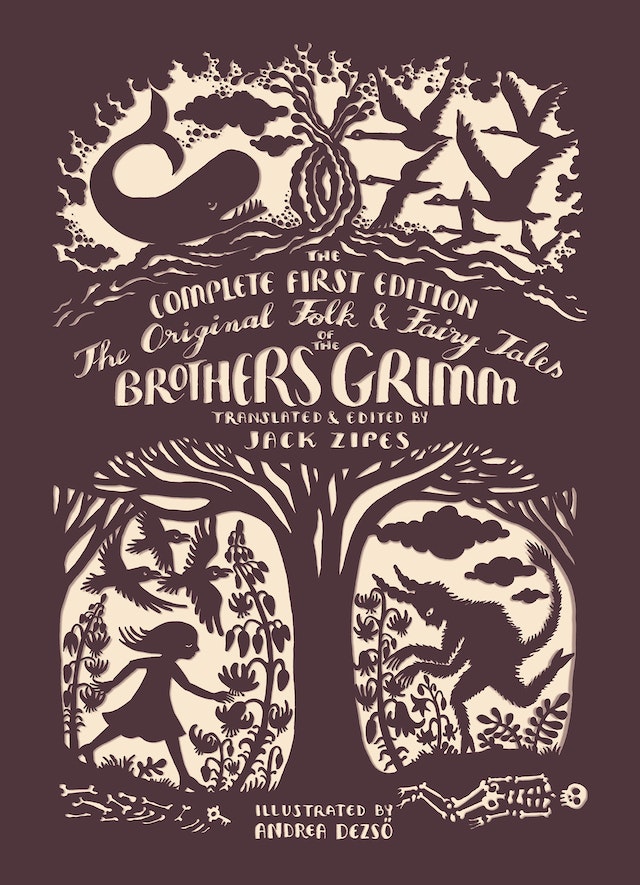 From “The Frog King” to “The Golden Key,” wondrous worlds unfold—heroes and heroines are rewarded, weaker animals triumph over the strong, and simple bumpkins prove themselves not so simple after all. Esteemed fairy tale scholar Jack Zipes offers accessible translations that retain the spare description and engaging storytelling style of the originals. Indeed, this is what makes the tales from the 1812 and 1815 editions unique—they reflect diverse voices, rooted in oral traditions, that are absent from the Grimms’ later, more embellished collections of tales. Zipes’s introduction gives important historical context, and the book includes the Grimms’ prefaces and notes.

A delight to read, The Original Folk and Fairy Tales of the Brothers Grimm presents these peerless stories to a whole new generation of readers.

Jack Zipes is the translator of The Complete Fairy Tales of the Brothers Grimm (Bantam), the editor of The Great Fairy Tale Tradition (Norton), and the author of Grimm Legacies (Princeton). He is professor emeritus of German and comparative literature at the University of Minnesota. Andrea Dezsö is a visual artist who exhibits in museums and galleries worldwide and is associate professor of art at Hampshire College.

"This collection contains many of the most-loved fairy tales in the history of the form . . . The book is a classic, formed like a mosaic of precious small pieces, each one glinting with its own color and character, glass and crystalline, but somehow hard, unyielding."—Marina Warner, New York Review of Books

"This new translation . . . allows those without German expertise a chance to re-experience familiar stories in all their original Hemingwayesque terseness."—Michael Dirda, Washington Post

"[T]he new Zipes translation of the first edition, with all its notes and annotations, is a must, a treasure for anyone with a serious interest in fairy tales, the motifs of which linger perpetually in the collective mind."—Carmel Bird, Sydney Morning Herald

"Zipes, who edited and translated the new collection, has done splendid work, first in arguing for the early tales' significance. . . . Zipes' most important achievement, though, is simply putting the complete, uncensored tales before readers to judge for themselves. . . . The Original Folk and Fairy Tales—beautifully illustrated by Andrea Dezsö, by the way—isn't the Disneyfied version of the Brothers Grimm that we all grew up with. But for readers whose tastes lean more to, say, Tim Burton, wading into the collection might feel like stumbling into an agreeably dark and Gothic forest."—Doug Childers, Richmond Times-Dispatch

"Never before published in English, the first edition of the Brothers Grimms' tales reveals an unsanitised version of the stories that have been told at bedtime for more than 200 years. . . . His version of the original 156 stories . . . shows a very different side to the well-known tales, as well as including some gruesome new additions."—Alison Flood, The Guardian

"[B]eguiling collections that are both a showcase of the enduring fascination with tales of the marvelous and strange and a celebration of those scholars who continue to research the realm of folklore. They unearth gems, and further our understanding of the stories and storytellers' place in the cultural history of their respective countries and, more broadly, in the universal human need to tell and listen to stories. . . . The rewards of these collections are irresistible."—Rebecca K. Morrison, Independent

"The new book, published by Princeton University Press, offers a fascinating insight into how the collection has changed with the times."—Nick Enoch, Mail Online

"Zipes has produced the inaugural English translation of the two original volumes in a gutsy, robust style—warts-and-all."—Marguerite Johnson, The Conversation

"A far more unsettling, exhilarating, oral and adult encounter than you might expect of 'fairy stories.'"—Arifa Akbar, Independent

"Who wouldn't want to read a story called The Singing Bone? 156 fables—their collected works—newly translated but easily just as creepy and weird."—Globe and Mail

"Zipes's translation of the first edition of the collection by the Brothers Grimm is a wonderful addition to the material available in English."—Rowan Williams, New Statesman

"[T]hese unexpurgated Grimms' stories are really for older readers who want to delve into the strange stuff that is German folk tales. Deszö's black and white cut-paper illustrations convey a world in which boundaries between the practical and improbable are as fluid and shifting as a dream. 'The miraculous makes self-evident what is wrong with the real world,' writes Zipes in his learned, accessible introduction, and that's as good a key as any by which to enter this extraordinary territory."—Deirdre Baker, Toronto Star

"The venerable Jack Zipes, one of the shiniest scholars in fairy tale studies, has brought us a lovely treat, which is a new translation of the first edition of the Grimm Fairy Tales, decorated with wonderfully creepy illustrations by Andrea Dezsö. . . . It's an excellent little book. If not a replacement for whatever illustrated fairy tale collection you had as a child, it's certainly a valuable addition to the library of a fairytale-loving child or adult."—Reading the End

"The U.S.'s most prolific and deeply insightful fairy tales scholar, Zipes offers a keen and sophisticated, fresh and colloquia, first-time translation—complete with discerning introduction—of the Grimm's original two-volume opus of 156 stories, first published in 1812 and 1815."—Choice

"Jack Zipes's new translation of the original two volumes of the Grimm Brothers' fairy tales is a revelation. . . . I know I'll be going back to this book, time and again in the years to come."—Benjamin Read, Books To Look For

"[A]ccepted as probably the world's greatest authority on the Grimms and fairy tales in general, Zipes is well qualified to redress the common perception of the brothers' published works."—Kevin Murphy, Magonia

"Zipes puts forth expert and readable analysis and thoughts on the Grimms, and provides an excellent critical starting point to foster interest in the brothers' history and continuing legacy."—Sam Harby, Nudge Books

"[The Original Folk and Fairy Tales of the Brothers Grimm: The Complete First Edition] tempts like the devil to read the tales again, gasp at their brazen heroes, and wander their forest paths."—Willis Goth Regier, World Literature Today

"What a treat these stories are, presented to readers now with [Jack Zipes'] masterful translations. The tales are, in turn, moving, brutal, and always unequivocally plainspoken, a refreshing thing to read after so many edited versions. The book also includes exquisite black-and-white cut-paper illustrations from visual artist Andrea Dezsö."—Julie Danielson, Kirkus

"It's one thing to read Zipes's erudite commentary on the tales, and quite another to discover these differences for oneself in the reading experience, and thus I encourage folklorists, fairy-tale scholars, and lay readers alike to peruse the pages of the first edition of the Grimms' tales. The illustrations by Andrea Dezsö—stark, simple, and beautiful—are an additional treat."—Jeana Jorgensen, Journal of Folklore Research

"We might wonder what the Brothers Grimm would think of [the] evolution of their oeuvre, which was originally, quite frankly, pretty grim. . . . Consider these examples, from [this] English translation of the first edition by the Brothers Grimm – and perhaps don’t share them with your children at bedtime."—Victoria Marston, Country Life Magazine

"A massive and brilliant accomplishment—the first English translation of the original Grimm brothers' fairy tales. The plain telling is that much more forceful for its simplicity and directness, particularly in scenes of naked self-concern and brutality. Hate, spite, love, magic, all self-evident, heartbreaking, delightful. I will return to this book over and over, no doubt about it."—Donna Jo Napoli, author of The Wager

"For a long time, Jack Zipes has explored fairy tale territory with an unstoppable love and prodigious energy. Now, in this complete translation of the first two editions of the Grimms' famous tales, Zipes has redrawn the map we thought we knew, and the Brothers' stories are made wonderfully strange again. This new and indispensable volume is beautifully presented."—Marina Warner, author of Stranger Magic: Charmed States and the Arabian Nights

"This complete, unexpurgated, and insightfully annotated English-language edition of the Grimms' tales keeps readers anchored in the timeless world of the fairy tale. It will be treasured by all lovers of stories. Irresistible and unputdownable." —Shelley Frisch, translator of Kafka: The Years of Insight

"This English translation of the landmark first edition of Grimms' folk and fairy tales makes available a very important text to everyone with an interest in these stories." —Donald Haase, Wayne State University

"Jack Zipes's translations of the 156 tales in this significant edition are truly exquisite."—Ulrich C. Knoepflmacher, author of Ventures into Childland: Victorians, Fairy Tales, and Femininity