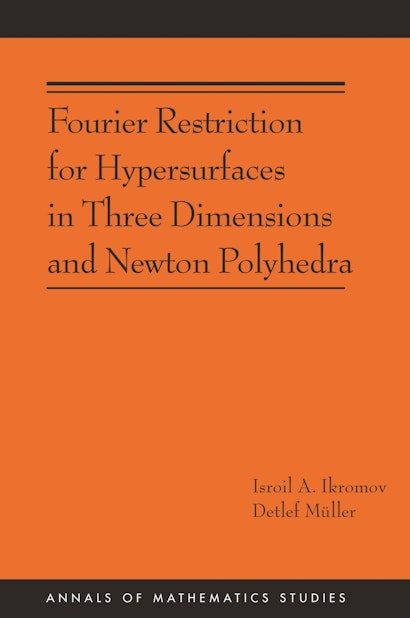 This is the first book to present a complete characterization of Stein-Tomas type Fourier restriction estimates for large classes of smooth hypersurfaces in three dimensions, including all real-analytic hypersurfaces. The range of Lebesgue spaces for which these estimates are valid is described in terms of Newton polyhedra associated to the given surface.

Isroil Ikromov and Detlef Müller begin with Elias M. Stein’s concept of Fourier restriction and some relations between the decay of the Fourier transform of the surface measure and Stein-Tomas type restriction estimates. Varchenko’s ideas relating Fourier decay to associated Newton polyhedra are briefly explained, particularly the concept of adapted coordinates and the notion of height. It turns out that these classical tools essentially suffice already to treat the case where there exist linear adapted coordinates, and thus Ikromov and Müller concentrate on the remaining case. Here the notion of r-height is introduced, which proves to be the right new concept. They then describe decomposition techniques and related stopping time algorithms that allow to partition the given surface into various pieces, which can eventually be handled by means of oscillatory integral estimates. Different interpolation techniques are presented and used, from complex to more recent real methods by Bak and Seeger.

Fourier restriction plays an important role in several fields, in particular in real and harmonic analysis, number theory, and PDEs. This book will interest graduate students and researchers working in such fields.