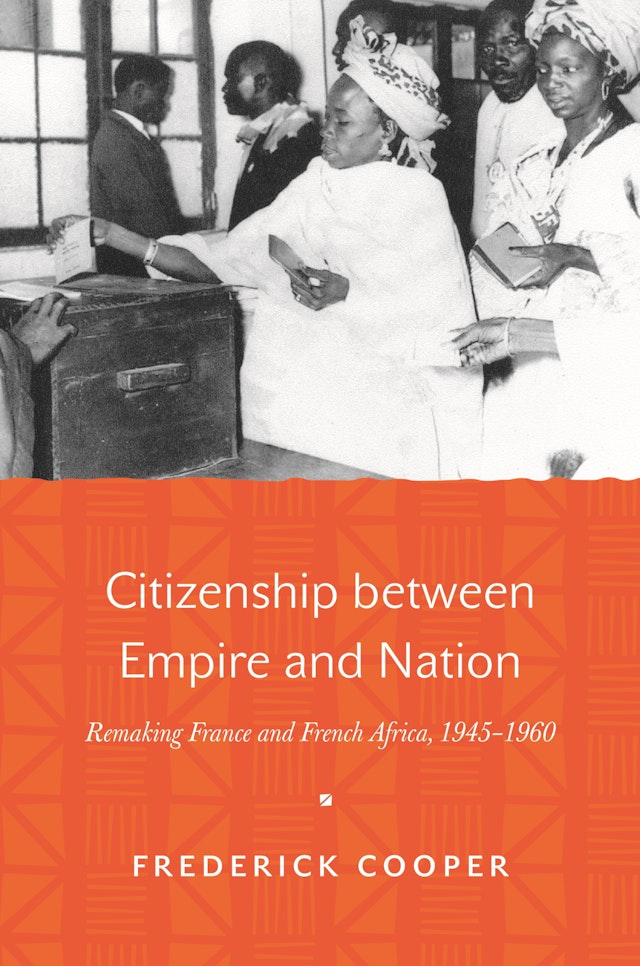 As the French public debates its present diversity and its colonial past, few remember that between 1946 and 1960 the inhabitants of French colonies possessed the rights of French citizens. Moreover, they did not have to conform to the French civil code that regulated marriage and inheritance. One could, in principle, be a citizen and different too. Citizenship between Empire and Nation examines momentous changes in notions of citizenship, sovereignty, nation, state, and empire in a time of acute uncertainty about the future of a world that had earlier been divided into colonial empires.

Frederick Cooper explains how African political leaders at the end of World War II strove to abolish the entrenched distinction between colonial “subject” and “citizen.” They then used their new status to claim social, economic, and political equality with other French citizens, in the face of resistance from defenders of a colonial order. Africans balanced their quest for equality with a desire to express an African political personality. They hoped to combine a degree of autonomy with participation in a larger, Franco-African ensemble. French leaders, trying to hold on to a large French polity, debated how much autonomy and how much equality they could concede. Both sides looked to versions of federalism as alternatives to empire and the nation-state. The French government had to confront the high costs of an empire of citizens, while Africans could not agree with French leaders or among themselves on how to balance their contradictory imperatives. Cooper shows how both France and its former colonies backed into more “national” conceptions of the state than either had sought.

Frederick Cooper is professor of history at New York University and has been visiting professor at the École des Hautes Études en Sciences Sociales, the École Normale Supérieure, and the Université de Paris VII. His many books include Colonialism in Question and Empires in World History (Princeton).

"In this archival tour de force, Frederick Cooper proposes a radically new understanding of French decolonization in Africa. Far from being determined by the irrepressible force of nationalism, this process was punctuated by attempts to invent alternatives to empire that would maintain a strong connection between France and African territories. Cooper captures the effervescence of these debates, during which French and African individuals transformed the meaning of such central notions as citizenship, empire, nation, and federation. By showing the depth of their political imagination, Cooper invites us to think about the power of ours."—Emmanuelle Saada, Columbia University

"Exploring the claims of colonial subjects and metropolitan attempts to reform colonial governance, Citizenship between Empire and Nation traces the complexities of citizenship, the horizons of self-representation, and the uncertainties of the politics of transition during the end of an empire. Based on in-depth archival research and theoretical insights, this remarkable account is located at the intersection where the future of empire and of France is debated. It will change our understanding of nationhood, citizenship, and political imagination."—Mamadou Diouf, Columbia University

"With its exhaustive research, clear and persuasive argument, and boldly original questions, this book is nothing short of magisterial. It is quite simply the best comprehensive study that I have read regarding the final stages of France's empire in Africa. There is nothing like it in depth, scope, or analytical acuity."—Alice L. Conklin, Ohio State University

"This is the first book to provide a much-needed exploration of the time and space in between empire and postcolony in sub-Saharan Francophone Africa. Cooper expertly navigates between African and French perspectives, bringing to life the negotiations over the future of Africa. Timely and significant, this excellent, wide-ranging, and original book uses dazzling research to elaborate a completely new and compelling argument."—Eric Jennings, University of Toronto