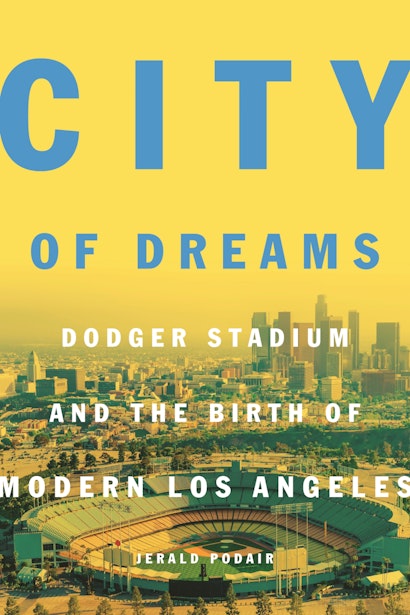 When Walter O’Malley moved his Brooklyn Dodgers to Los Angeles in 1957 with plans to construct a new ballpark, he ignited a bitter half-decade dispute over the future of a rapidly changing city. For the first time, City of Dreams tells the full story of the controversial building of Dodger Stadium and how it helped create modern Los Angeles. In a vivid narrative, Jerald Podair tells how the city was convulsed over whether, where, and how to build the stadium. Eventually, it was built on publicly owned land from which the city had uprooted a Mexican American community, raising questions about the relationship between private profit and “public purpose.” Indeed, the battle over Dodger Stadium crystallized issues with profound implications for all American cities. Filled with colorful stories, City of Dreams will fascinate anyone who is interested in the history of the Dodgers, baseball, Los Angeles, and the modern American city.

A look inside City of Dreams

Jerald Podair is professor of history and the Robert S. French Professor of American Studies at Lawrence University in Appleton, Wisconsin. He is the author of The Strike That Changed New York and Bayard Rustin: American Dreamer.

“Jerald Podair sets the record straight. . . . With exhaustive documentation he takes us through every step of the Dodgers' move west.”—Marshall Goldberg, Weekly Standard