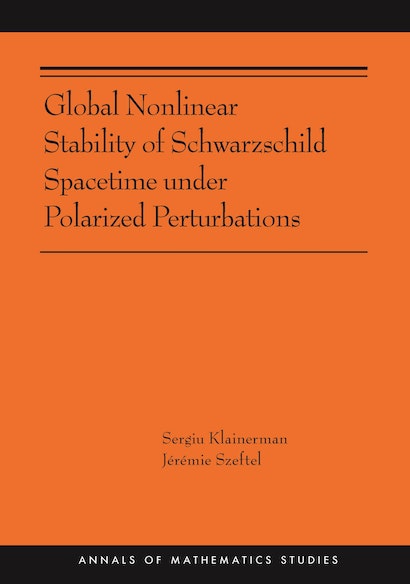 One of the major outstanding questions about black holes is whether they remain stable when subject to small perturbations. An affirmative answer to this question would provide strong theoretical support for the physical reality of black holes. In this book, Sergiu Klainerman and Jérémie Szeftel take a first important step toward solving the fundamental black hole stability problem in general relativity by establishing the stability of nonrotating black holes—or Schwarzschild spacetimes—under so-called polarized perturbations. This restriction ensures that the final state of evolution is itself a Schwarzschild space. Building on the remarkable advances made in the past fifteen years in establishing quantitative linear stability, Klainerman and Szeftel introduce a series of new ideas to deal with the strongly nonlinear, covariant features of the Einstein equations. Most preeminent among them is the general covariant modulation (GCM) procedure that allows them to determine the center of mass frame and the mass of the final black hole state. Essential reading for mathematicians and physicists alike, this book introduces a rich theoretical framework relevant to situations such as the full setting of the Kerr stability conjecture.

Sergiu Klainerman is Eugene Higgins Professor of Mathematics at Princeton University. His books include The Global Nonlinear Stability of the Minkowski Space (Princeton). Jérémie Szeftel is a CNRS senior researcher in mathematics at the Laboratoire Jacques-Louis Lions of Sorbonne Université in Paris.