This audiobook narrated by William Hope examines how Emerson, Thoreau, and William James forged resilience from devastating loss and changed the course of American thought 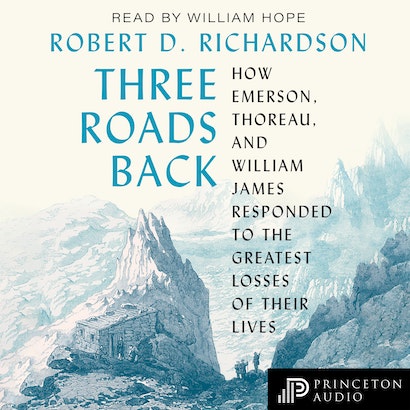 In Three Roads Back, Robert Richardson, the author of magisterial biographies of Ralph Waldo Emerson, Henry David Thoreau, and William James, tells the connected stories of how these foundational American writers and thinkers dealt with personal tragedies early in their careers. For Emerson, it was the death of his young wife and, eleven years later, his five-year-old son; for Thoreau, it was the death of his brother; and for James, it was the death of his beloved cousin Minnie Temple. Filled with rich biographical detail and unforgettable passages from the journals and letters of Emerson, Thoreau, and James, these vivid and moving stories of loss and hard-fought resilience show how the writers’ responses to these deaths helped spur them on to their greatest work, influencing the birth and course of American literature and philosophy.

In reaction to his traumatic loss, Emerson lost his Unitarian faith and found solace in nature. Thoreau, too, leaned on nature and its regenerative power, discovering that “death is the law of new life,” an insight that would find expression in Walden. And James, following a period of panic and despair, experienced a redemptive conversion and new ideas that would drive his work as a psychologist and philosopher. As Richardson shows, all three emerged from their grief with a new way of seeing, one shaped by a belief in what Emerson called “the deep remedial force that underlies all facts.”

An inspiring book about resilience and the new growth and creativity that can stem from devastating loss, Three Roads Back is also an extraordinary account of the hidden wellsprings of American thought.

Robert D. Richardson (1934–2020) was the author of the acclaimed biographies William James: In the Maelstrom of American Modernism, Henry Thoreau: A Life of the Mind, and Emerson: The Mind on Fire. He was a recipient of the Bancroft and Francis Parkman prizes and a finalist for the National Book Critics Circle Award. Megan Marshall is the Pulitzer Prize–winning author of Margaret Fuller: A New American Life.

“As much as any of [Richardson’s] magisterial biographies, Three Roads Back is a consideration of how America’s foundational thinkers arrived at their ideas.”—from the foreword by Megan Marshall

“Robert D. Richardson’s graceful Three Roads Back tells a story of resilience—specifically, how Emerson, Thoreau, and William James recovered, insofar as recovery is possible, from the deaths of dearly loved family or friends. And in so telling Richardson offers, yet again, a book of sympathy, of regeneration, of wonder, and, to quote Thoreau, a book of inexhaustible vigor.”—Brenda Wineapple, author of The Impeachers: The Trial of Andrew Johnson and the Dream of a Just Nation

“Living is the process of losing grip and letting go. In his final lesson, capping an unparalleled career, Richardson teaches us how to live with grace and courage, to cherish what is most precious—the time we have left. It will be an enduring challenge for American philosophy to go on without him.”—John Kaag, author of Sick Souls, Healthy Minds: How William James Can Save Your Life​​​​​​