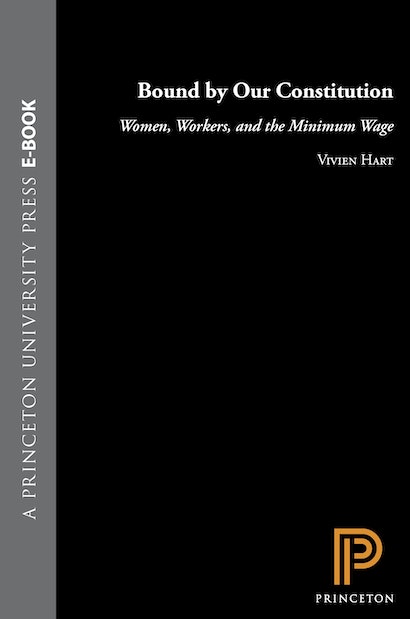 What difference does a written constitution make to public policy? How have women workers fared in a nation bound by constitutional principles, compared with those not covered by formal, written guarantees of fair procedure or equitable outcome? To investigate these questions, Vivien Hart traces the evolution of minimum wage policies in the United States and Britain from their common origins in women’s politics around 1900 to their divergent outcomes in our day. She argues, contrary to common wisdom, that the advantage has been with the American constitutional system rather than the British.

Basing her analysis on primary research, Hart reconstructs legal strategies and policy decisions that revolved around the recognition of women as workers and the public definition of gender roles. Contrasting seismic shifts and expansion in American minimum wage policy with indifference and eventual abolition in Britain, she challenges preconceptions about the constraints of American constitutionalism versus British flexibility. Though constitutional requirements did block and frustrate women’s attempts to gain fair wages, they also, as Hart demonstrates, created a terrain in the United States for principled debate about women, work, and the state — and a momentum for public policy — unparalleled in Britain. Hart’s book should be of interest to policy, labor, women’s, and legal historians, to political scientists, and to students of gender issues, law, and social policy.

Vivien Hart is Reader in American Studies at the University of Sussex.

"[a] thoroughly researched, tightly written, and conceptually rich study. . . . this book explores minimum wage politics and practices in Great Britain and the US over the past century or so. The comparison is instructive. . . . Bound by Our Constitution will be widely consulted by scholars in the social sciences and humanities, particularly those in history, political science, law, and women's studies."—Choice

"A model of comparative scholarship, [weaving] together many strands of analysis . . . . Vivien Hart paints a clear enough picture of events and controversies so readers can come to their own conclusions about the significance of these issues and think afresh about current debates."—Cheryl B. Welch, Simmons College