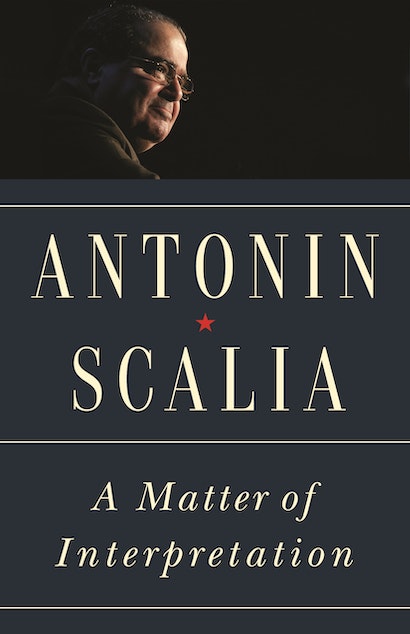 We are all familiar with the image of the immensely clever judge who discerns the best rule of common law for the case at hand. According to U.S. Supreme Court Justice Antonin Scalia, a judge like this can maneuver through earlier cases to achieve the desired aim—“distinguishing one prior case on his left, straight-arming another one on his right, high-stepping away from another precedent about to tackle him from the rear, until (bravo!) he reaches the goal—good law.” But is this common-law mindset, which is appropriate in its place, suitable also in statutory and constitutional interpretation? In a witty and trenchant essay, Justice Scalia answers this question with a resounding negative.

In exploring the neglected art of statutory interpretation, Scalia urges that judges resist the temptation to use legislative intention and legislative history. In his view, it is incompatible with democratic government to allow the meaning of a statute to be determined by what the judges think the lawgivers meant rather than by what the legislature actually promulgated. Eschewing the judicial lawmaking that is the essence of common law, judges should interpret statutes and regulations by focusing on the text itself. Scalia then extends this principle to constitutional law. He proposes that we abandon the notion of an everchanging Constitution and pay attention to the Constitution’s original meaning. Although not subscribing to the “strict constructionism” that would prevent applying the Constitution to modern circumstances, Scalia emphatically rejects the idea that judges can properly “smuggle” in new rights or deny old rights by using the Due Process Clause, for instance. In fact, such judicial discretion might lead to the destruction of the Bill of Rights if a majority of the judges ever wished to reach that most undesirable of goals.

This essay is followed by four commentaries by Professors Gordon Wood, Laurence Tribe, Mary Ann Glendon, and Ronald Dworkin, who engage Justice Scalia’s ideas about judicial interpretation from varying standpoints. In the spirit of debate, Justice Scalia responds to these critics.

Featuring a new foreword that discusses Scalia’s impact, jurisprudence, and legacy, this witty and trenchant exchange illuminates the brilliance of one of the most influential legal minds of our time.

"[We] are lucky to have, in book form, an essay on legal interpretation by Justice Scalia. . . . [He] projects a sanguine humor through a robust prose enlivened by sly sallies against what he sees as the gaps in logic of the opposing camp. He is anything but the angry justice of popular myth."—John O. McGinnis, Wall Street Journal

"[T]he Supreme Court's highest-profile conservative . . . Suggest[s] we ought to junk judicial review as we have known it. . . . The reason, I think, is that Scalia objects not merely to certain decisions of this or prior Courts but to judicial review, American-style, in its entirety. His central aim as a jurist has been to get the federal courts out of the business of adjudicating individual rights."—Garrett Epps, The Nation

"As this . . . book makes clear, Scalia deserves respect for having redefined the mainstream of constitutional discourse, and in a substantially useful way."—Jeffrey Rosen, New Republic

"Love him or hate him (it's hard to imagine a neutral opinion), Scalia is a brilliant and engaging writer. This tantalizing short debate with his equally brilliant critics shows just how radical our most conservative justice is."—Kathleen Kahn, San Francisco Chronicle

"Justice Scalia's well-written and patiently explained theory, augmented and challenged by the commentaries of four scholars, will fascinate and enlighten even those readers, and they are many, whom it does not convince. . . . Justice Scalia merits praise for the clarity with which he writes and for the careful thought that underlies his writing."—Walter Barthold, The Lawyer's Bookshelf

"Antonin Scalia. . . confronts four high-powered critics in a short book for the general public—perhaps the first time a sitting justice of the Supreme Court has done so. This is a book for anyone with a serious interest in law and the Constitution."—Carl M. Dibble, Detroit News

"As the most intellectually consistent and stylistically gifted member of the Supreme Court, Scalia has never hidden his enthusiasm for the American tradition of mistrusting courts and lawyers. The basics of his judicial philosophy are now usefully collated into this volume. . . . Scalia's arguments have shaped the debate in our time; he has gone a long way toward changing how judges interpret the letter of the law."—David Franklin, Slate

"A Matter of Interpretation demonstrates both the attraction of Scalia's 'textualist' theory and his qualities as a judicial statesman. . . [His] elegant essay, the most concise and accessible presentation of his views, argues eloquently that judicial authority can only be based on the statutory or constitutional text."—Michael Greve, Reason

"Whether you agree with [Scalia's] views or not, it is hard to think of any other recent Supreme Court justice who has made a comparably great contribution to debates over both statutory interpretation and constitutional theory."—Ilya Somin, Washington Post

"Scalia was a transformative jurist, one worthy of great admiration. . . . Suffice it to say that in spite of our disagreements, I invariably found Justice Scalia's thinking and prodding to be brilliantly generative of important insights into the way law and legal interpretation ought to proceed."—Laurence H. Tribe, Globe and Mail

"A Matter of Interpretation is a must read. . . . It was [Scalia's] overall approach to judicial decision-making that inspired a generation of young lawyers and will serve as his most lasting legacy."—Kevin P. Martin, New Boston Post