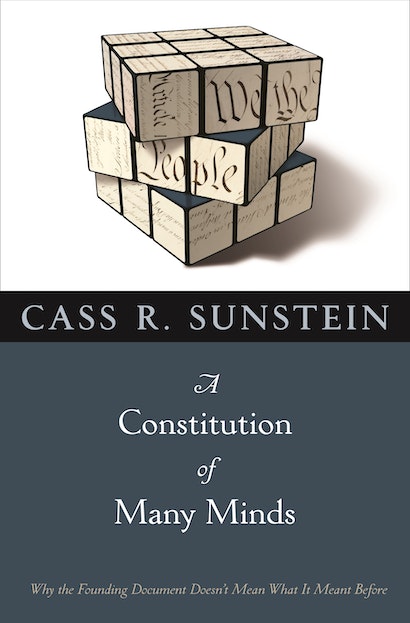 The future of the U.S. Supreme Court hangs in the balance like never before. Will conservatives or liberals succeed in remaking the court in their own image? In A Constitution of Many Minds, acclaimed law scholar Cass Sunstein proposes a bold new way of interpreting the Constitution, one that respects the Constitution’s text and history but also refuses to view the document as frozen in time.


Exploring hot-button issues ranging from presidential power to same-sex relations to gun rights, Sunstein shows how the meaning of the Constitution is reestablished in every generation as new social commitments and ideas compel us to reassess our fundamental beliefs. He focuses on three approaches to the Constitution — traditionalism, which grounds the document’s meaning in long-standing social practices, not necessarily in the views of the founding generation; populism, which insists that judges should respect contemporary public opinion; and cosmopolitanism, which looks at how foreign courts address constitutional questions, and which suggests that the meaning of the Constitution turns on what other nations do.


Sunstein demonstrates that in all three contexts a “many minds” argument is at work — put simply, better decisions result when many points of view are considered. He makes sense of the intense debates surrounding these approaches, revealing their strengths and weaknesses, and sketches the contexts in which each provides a legitimate basis for interpreting the Constitution today.


This book illuminates the underpinnings of constitutionalism itself, and shows that ours is indeed a Constitution, not of any particular generation, but of many minds.

Cass R. Sunstein is currently on leave from his position as the Felix Frankfurter Professor at Harvard Law School to serve as Administrator of the Office of Regulation and Information Policy in the Obama administration. His many books include Republic.com 2.0 (Princeton), Worst-Case Scenarios, and Nudge.

"Applying . . . insights to the field of constitutional law, the book develops, in elegant and careful prose, a novel collection of arguments within their discipline. The author [has] raised a number of fresh and controversial issues, and, as a result, [his] work is certain to be widely read and much discussed."—N.W. Barber, Texas Law Review

"Sunstein has a knack for identifying the operative kernel of complex ideas in a way that allows the reader to see how an unfamiliar concept links seemingly disparate problems."—Azuz Huq, New York Law Journal

"We would do well to have more thinkers around like Sunstein, and better yet to have more of them on the Supreme Court."—Leonard H. Becker, DC Lawyer Magazine

"What distinguishes the most important minds is less the answers they offer than the questions they ask. Who but Cass Sunstein would think to ask what unites the arguments and assumptions of traditionalists, populists, and cosmopolitans in constitutional interpretation and elsewhere—and what influences the force of those arguments at different times and in different places? Exploring those questions with his characteristic elegance and insight, Sunstein—the most prolific and significant legal scholar of our time—has written a brilliant book for all seasons."—Laurence H. Tribe, Harvard Law School

"Sunstein combines diverse theories of constitutional interpretation into one coherent framework. That framework is captured by the book's title—A Constitution of Many Minds. This book is likely to be widely read and highly cited."—Kim Lane Scheppele, author of Legal Secrets

"Sunstein presents an elegant and fascinating argument, and he consistently tries to play fair with the views he is assessing. He covers many areas and has provocative things to say about them. A Constitution of Many Minds is a fine book that is sure to provoke much discussion."—Sanford Levinson, author of Our Undemocratic Constitution