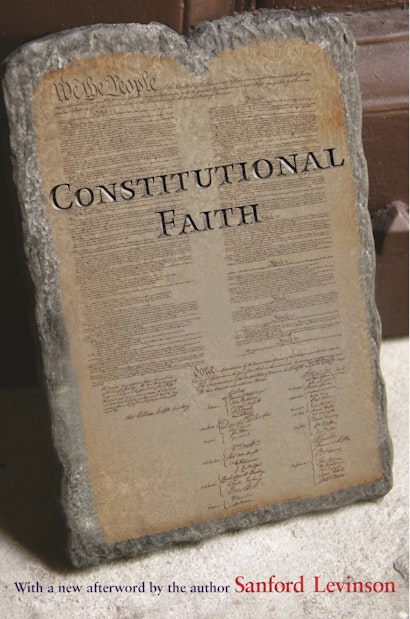 This book examines the “constitutional faith” that has, since 1788, been a central component of American “civil religion.” By taking seriously the parallel between wholehearted acceptance of the Constitution and religious faith, Sanford Levinson opens up a host of intriguing questions about what it means to be American. While some view the Constitution as the central component of an American religion that serves to unite the social order, Levinson maintains that its sacred role can result in conflict, fragmentation, and even war. To Levinson, the Constitution’s value lies in the realm of the discourse it sustains: a uniquely American form of political rhetoric that allows citizens to grapple with every important public issue imaginable.


In a new afterword, Levinson looks at the deepening of constitutional worship and attributes the current widespread frustrations with the government to the static nature of the Constitution.

Sanford Levinson is professor of law and government at the University of Texas Law School and a frequent visitor at the Harvard and Yale law schools. He is a member of the American Academy of Arts and Sciences. His many books include Our Undemocratic Constitution.

"The signal virtue of these fascinating travels through the metaphoric and historical life of the secular worship of the Constitution is the challenge . . . to work out the terms of one's own constitutional faith."—Michael Meltsner, The Nation

"Sanford Levinson is a man of the left who takes patriotism seriously. In Constitutional Faith, he offers a timely meditation on exactly what, if anything, America can stand for."—Stephen Macedo, The New Republic

"[Levinson] brilliantly transposes his concern from the overfamiliar problem of how judges should decide cases and how they can be restrained from becoming tyrants to the question of what it means to adhere to a constitution. . . . [The book] is rich and pleasingly conversational."—Thomas Morawetz, The Philadelphia Inquirer

"I found Constitutional Faith a profound and profoundly unsettling examination of the paradoxes of Constitutional history. I imagine it will be necessary reading from now on to all those readers, and not only scholars, sensitive to the delicate web of beliefs that gives cohesion to our national life and identity."—E. L. Doctorow

"I finally understand why the Constitution is to America what the Holy Scriptures are to Jews and Christians."—Bill Moyers

"[A] lively, intelligent, timely, and highly original study of American constitutionalism as a form of secular religion. [This book] deserves a wide audience."—Richard A. Posner, U.S. Court of Appeals