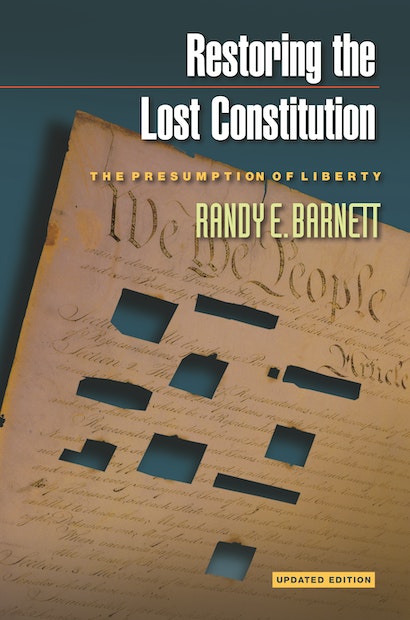 The U.S. Constitution found in school textbooks and under glass in Washington is not the one enforced today by the Supreme Court. In Restoring the Lost Constitution, Randy Barnett argues that since the nation’s founding, but especially since the 1930s, the courts have been cutting holes in the original Constitution and its amendments to eliminate the parts that protect liberty from the power of government. From the Commerce Clause, to the Necessary and Proper Clause, to the Ninth and Tenth Amendments, to the Privileges or Immunities Clause of the Fourteenth Amendment, the Supreme Court has rendered each of these provisions toothless. In the process, the written Constitution has been lost.


Barnett establishes the original meaning of these lost clauses and offers a practical way to restore them to their central role in constraining government: adopting a “presumption of liberty” to give the benefit of the doubt to citizens when laws restrict their rightful exercises of liberty. He also provides a new, realistic and philosophically rigorous theory of constitutional legitimacy that justifies both interpreting the Constitution according to its original meaning and, where that meaning is vague or open-ended, construing it so as to better protect the rights retained by the people.


As clearly argued as it is insightful and provocative, Restoring the Lost Constitution forcefully disputes the conventional wisdom, posing a powerful challenge to which others must now respond.


This updated edition features an afterword with further reflections on individual popular sovereignty, originalist interpretation, judicial engagement, and the gravitational force that original meaning has exerted on the Supreme Court in several recent cases.

Randy E. Barnett is the Carmack Waterhouse Professor of Legal Theory at the Georgetown University Law Center and was a Guggenheim Fellow in Constitutional Studies. He is the author of The Structure of Liberty: Justice and the Rule of Law.

"A hopeful work—provocative, documented, resolute, reasoned, readable—delightfully devoid of legalistic obtuseness. It lights up a road back to limited government, albeit a steep road."—Willian H. Peterson, Washington Times

"Barnett's new book is a valuable asset for those interested in controversial topics of constitutional theory."—Züthü Arslan, Political Studies Review

"Barnett's book is perhaps the most important book about originalism since Robert H. Bork's The Tempting of America. . . . It is the best defense ever written of a libertarian or conservative/libertarian approach to constitutional law."—Steven G. Calabresi, Michigan Law Review

"Randy Barnett makes two important arguments, one involving the interpretation of the Constitution by reference to original understandings, the other endorsing a libertarian tilt in resolving disputes about governmental powers. Constitutional scholars and students will find much to admire in Barnett's carefully nuanced arguments, whether or not they ultimately agree with his conclusions. But the book should attract general readers as well. It is remarkably well written, totally devoid of jargon, and presented in a conversational and courteous tone. A truly excellent book!"—Sanford Levinson, University of Texas School of Law, author of Constitutional Faith

"Step by step, Randy Barnett constructs an intriguing case for a moderately libertarian natural-rights Constitution that allows government action only when, and because, doing so protects the generously defined liberties of each person. Along the way he sheds new light on old controversies. This book should provoke the kind of controversy that advances our understanding of the Constitution."—Mark Tushnet, Georgetown University Law Center, author of The New Constitutional Order

"Provocative in the best sense, this is a very readable book whose argument is clear and accessible even to those unversed in the details of constitutional law or theory. It is particularly suggestive and effective in connecting two disparate strands of conservative political and constitutional theory: traditional conservative respect for original constitutional meaning and libertarian commitment to individual rights."—Keith Whittington, author of Constitutional Interpretation: Textual Meaning, Original Intent, and Judicial Review

"Randy Barnett's Restoring the Lost Constitution is a surprising book. It is surprising that a scholar as learned and competent as Barnett should undertake the defense of libertarianism—a perspective on the state and on law unfashionable among the intelligentsia for a century. It is surprising that he should defend it so well and reasonably. It is even more surprising that such a strong and comprehensive case can be made that this libertarian perspective not only was that of those who wrote and (more importantly) ratified the Constitution, but also that it is the lawful and proper way to interpret the Constitution today. This is an important and challenging book for anyone interested in American law and government."—Charles Fried, Beneficial Professor of Law, Harvard Law School, author of Saying What the Law Is: The Constitution in the Supreme Court

"This is an important book, one that everybody in the field will (or should) take account of. Randy Barnett puts forward a comprehensive, thoughtful, clear, concise, challenging, and historically plausible version of American Constitutionalism. He pulls together a tremendous amount of material, including some of the best recent revisionist scholarship on constitutional history, and sets this in a framework of great integrity and unity of vision."—Michael Zuckert, University of Notre Dame, author of Launching Liberalism: On Lockean Political Philosophy